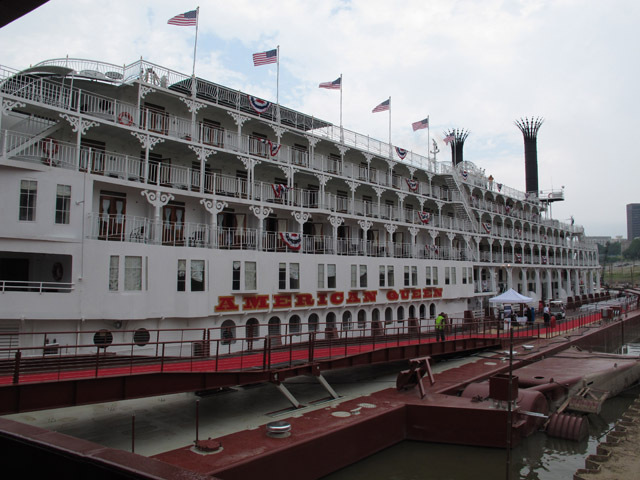 (AP) MEMPHIS, Tenn. - Priscilla Presley smashed a champagne bottle against a steamboat Friday, christening the American Queen as it resumed voyages along the Mississippi River.

"Just floating down the river brings back a lot of nostalgia for the heartland," said Presley, the former wife of the late rock `n' roll icon Elvis Presley, who lived in Memphis before his death in 1977.

The American Queen is the largest steamboat in the world, carrying 436 passengers. The 418-foot-long vessel is taking tourists on long-distance trips on the Mississippi for the first time since 2008, when its previous owner ceased operations.

The christening took place just before the boat left its home port of Memphis on a seven-day river cruise to Cincinnati.

The boat was purchased in August and has been refurbished and recommissioned by Great American Steamboat Company.

Presley thanked the boat's owners for naming her godmother of the boat. "She'll be bringing fun to families and friends from all over the world," she said, adding that the American Queen represents a city her husband loved.

She also praised the company for creating more than 170 jobs with the relaunching of the cruises. The cruises are expected to have an $89 million impact on the area economy, with travelers spending on flights and hotel rooms before and after trips, and during shore excursions.

The boat will be traveling along the Mississippi and its tributaries to cities such as Vicksburg, Miss., Louisville, Ky., St. Louis, New Orleans and Pittsburgh.

Riverboats on the Mississippi represent a storied chapter in American history and folklore, harking back to the 19th century and the writings of Mark Twain.