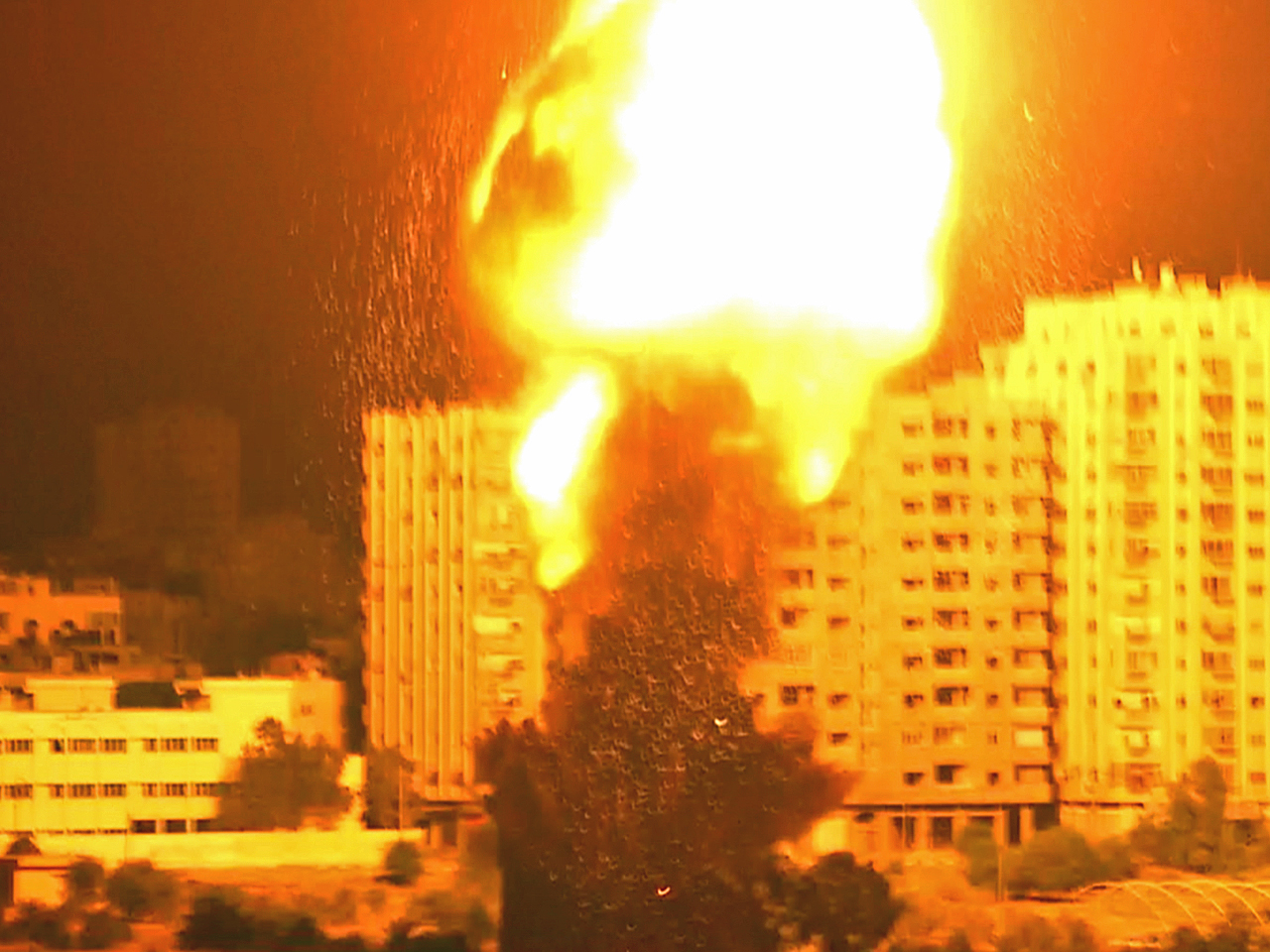 GAZA CITY -- Mohammed has been hit by shrapnel.

This evening, a particularly close blast sent us out onto our balcony to look at what was hit: a tall apartment building just behind our hotel. There's a big patch of sand between us and it, but that's all.

One rocket hit, and then as we watched, another. We ducked in case more shrapnel flew onto the balcony. There had been some before; chunks of seared metal that could shred a skull.

As we took cover, Mohammed was down below, driving back to the hotel with food to celebrate the end of today's fasting for the holy month of Ramadan, during which Muslims do not eat or drink during daylight hours. Mohammed works at our hotel in Gaza.

He's the internet engineer and he's not just good at his job, he's always around wanting to help, and he's quickly become a friend. His precious car took the brunt of what flew off the building above him, but his arm took some too. ‎Now he's standing in our doorway, one arm stitched and bandaged, the other holding his tool box. He's fine.

If he'd been a stranger passing us in the hallway of the hospital emergency room where we were this afternoon, I wouldn't even have noticed his wounds. In that hospital hallway, a bloody arm would have been nothing compared to the man whose leg was blown off. He now has a grotesque pile of raw, pulverized flesh lying where his thigh should be.

But this is our hallway, and the thought of Mohammed getting hurt makes my skin crawl.

‎"Why are you here at work now?" I scold him. "You should be resting."

He says there is no one else to do his job; we journalists need our internet. I feel guilty that his life is gravitating toward ours -- we, who are not the issue.

The rest of our hallway is usually swarming with little girls in pink outfits and sparkly things. We have two Palestinian journalists working with us, and I urged them to bring their families to stay with them here in this building that seems safer than their own homes. This is no time to be apart from your wife and children, worrying about their safety while they fend for themselves, alone and scared. Here, instead, they are scared and bored. The youngest knocks on my door to show me the dance moves she's been practicing all day, just for me.

But Palestinian families are big. One of our Palestinian colleagues has brothers and cousins up on the northern border where the Israeli troops came into Gaza last week. They were our eyes and ears there, but now in a desperate phone call to my colleague, they plead for him to send an ambulance. I can hear the pounding of shells around them on the other end of the phone line.

He moves heaven and earth to get them one and it finally arrives. For another relative, it is a donkey cart he arranges, to bring his body down to Gaza City for burial.

The phone never stops ringing: a call to tell him his horse has died, its belly ripped apart by shrapnel in a field up north on the family farm. He's sad for a moment, but it's better than losing a member of the family. A call to say his house -- the one on the farm -- has been destroyed. I try to imagine his sense of loss and expect to witness a personal crisis, but none comes; just a few moments of sadness, and a deep shrug. "I still have my family," he reasons...and gets back to work.

Work. We've all got that in common here, and ‎it's what gives us the focus to get past the horrors without being sidelined by them. Here along our hallway is where we deal with our own problems, but we're here for what lies beyond.

There is a story to cover, a stunning reality that we have to convey so that people across the world can know it's real.

When friends ask how we can do this work in such awful circumstances, I can't pretend we don't have those moments along the corridor where it becomes personal, but compared to other people's lives here, our moments are the lacerated arm compared to the pulverized leg: we're fine. We're working. Others should be so lucky.