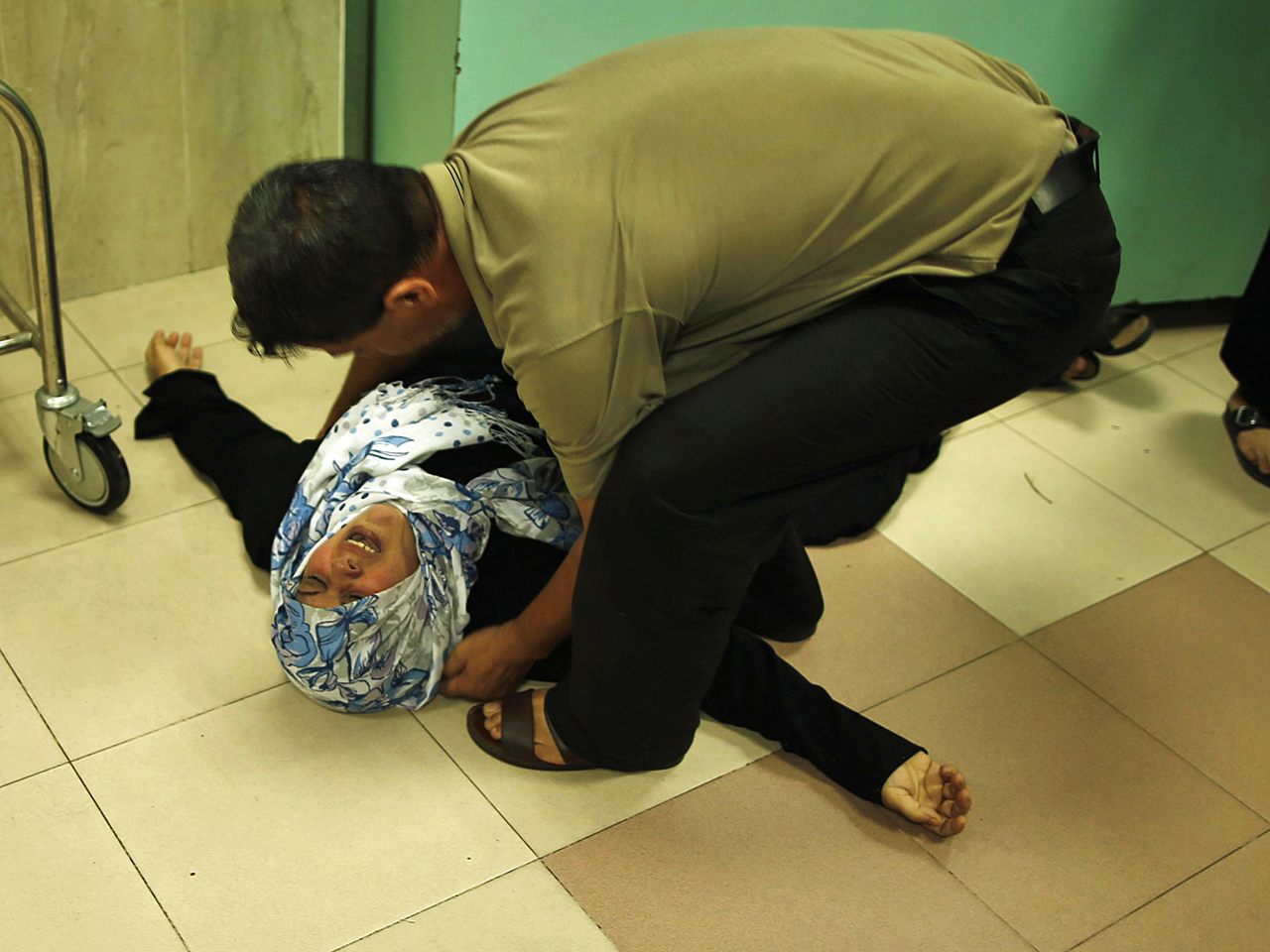 GAZA CITY, Gaza Strip -- Israeli troops battled Hamas militants on Wednesday near a southern Gaza Strip town as the U.S. secretary of state flew into Israel to press top-gear efforts for a truce in the conflict that has so far killed at least 657 Palestinians and 31 Israelis.

Neither side appeared to be backing down, after Palestinian rocket fire led several international airlines to cancel flights to Tel Aviv and Israeli troops clashed with Hamas near the Gaza town of Khan Younis in heavy fighting that forced dozens of families to flee. Hamas leader Khaled Mashaal later demanded Gaza's borders be open and an end to the blockade against it, calling Palestinians "the true owners of the land."

Trapped by the fighting in Khan Younis, a town on the southern edge of the Gaza Strip, dozens of Palestinian families scrambled to flee the area.

John Kerry landed in Tel Aviv despite a Federal Aviation Administration ban following a Hamas rocket near the airport the day before, reflecting his determination to achieve a cease-fire agreement between the warring sides as international organizations, the United Nations and the U.S. government expressed mounting concern over the toll on Palestinian civilians.

"One child has been killed in Gaza every hour for the past two days," said a statement released Wednesday by the U.N. Office for the Coordination of Humanitarian Affairs (OCHA).

According to OCHA, "a request for a humanitarian pause has been rejected by the Israeli authorities."

On Wednesday, the FAA said it was extending the ban on service by U.S. airlines to and from Tel Aviv for "up to an additional 24 hours."

CBS News correspondent Barry Petersen visited the main hospital in Gaza on Tuesday, where the man who runs the emergency room pointed to empty cupboards and said he was running out of supplies fast.

In one of the hospital beds, Petersen met a 9-year-old Palestinian girl who escaped an airstrike with her life. Her head wrapped in a bandage, she told him she was scared, but not in pain any more.

Petersen said on the other side of the border, six Israeli children have been injured by rockets fired from Gaza.

Kerry was to meet with Israeli Prime Minister Benjamin Netanyahu, Palestinian President Mahmoud Abbas and United Nations Secretary-General Ban Ki-moon in Jerusalem and Ramallah in what appeared to be a crucial day in the flailing talks. U.S. officials have downplayed expectations for an immediate, lasting truce between Israel and Hamas, the militant group that controls Gaza.

In Jerusalem, Kerry said negotiations toward a Gaza cease-fire agreement were making some progress after days of a deadly impasse between Israel and Hamas militants. He was not specific in describing what he called steps forward in the negotiations as he met for a second time this week with United Nations chief Ban Ki-moon.

Meanwhile, a foreign worker in Israel was killed when a rocket fired from the Gaza Strip landed in southern Israel on Wednesday, police spokeswoman Luba Samri said. She did not immediately know the worker's nationality.

Israel also reported that two more of its soldiers had died in the conflict, bringing the military's death toll to 29, but did not elaborate on the circumstances of the latest casualties. Two Israeli civilians have also died in the 15-day fighting.

A Palestinian health official said eight Hamas fighters died in the ferocious battle near Khan Younis, from where the Palestinian Red Crescent was trying to evacuate about 250. Khan Younis has been hit with Israeli tank shelling and drone strikes since early Wednesday.

The Red Crescent said Hamas fighters in the area were deploying rocket propelled grenades and light weapons, including machine guns, against the Israelis.

Hundreds of residents of eastern Khan Younis were seen fleeing their homes as the battle unfolded, flooding into the streets with what few belongings they could carry, many with children in tow. They said they were seeking shelter in nearby UN schools.

"The airplanes and airstrikes are all around us," said Aziza Msabah, a resident of Khan Younis. "They are hitting the houses, which are collapsing upon us."

The Israeli military did not respond to Associated Press inquiries as to why such heavy fighting was concentrated in Khan Younis, saying only it was conducting operations throughout the Gaza Strip. The fighting was centered on an agricultural area, which Israel has claimed is a site for Hamas tunnels going under the border into Israel.

The Palestinians say Israel is randomly deploying a wide array of modern weaponry against Gaza's 1.7 million people, inflicting a heavy civilian death toll and destroying large amounts of property there. By mid-day Wednesday, the Palestinian death toll stood at 657, according to Gaza health official Ashraf al-Kidra, most of them civilians.

Israel says it began the Gaza operation to halt Hamas rocket fire into Israel - more than 2,100 have been fired since the conflict erupted - and to destroy a network of tunnels leading from Gaza to Israel that are intended to allow Hamas militants to carry out attacks against Israelis.

Netanyahu has repeatedly blamed the high civilian death toll in Gaza on Hamas, saying they hide their weapons and fighters deliberately in residential areas because the images of civilian carnage serve to bolster sympathy for their cause.

As the Gaza death toll mounted, a 34-year-old Palestinian man was killed in clashes with Israeli soldiers near the West Bank City of Bethlehem, a potentially ominous development in an area that has so far been relatively free of violence, despite the Gaza fighting.

On Tuesday, U.S. and European airlines quickly canceled flights to Israel after a Hamas rocket hit near the Ben Gurion International Airport in Tel Aviv, dealing a blow to Israel's lucrative tourist industry.

The conflict is also starting to strain the Israeli economy. Military and finance ministry officials have said that the first 10 days of the operation had direct costs of about 2 billion shekels - about $585 million.