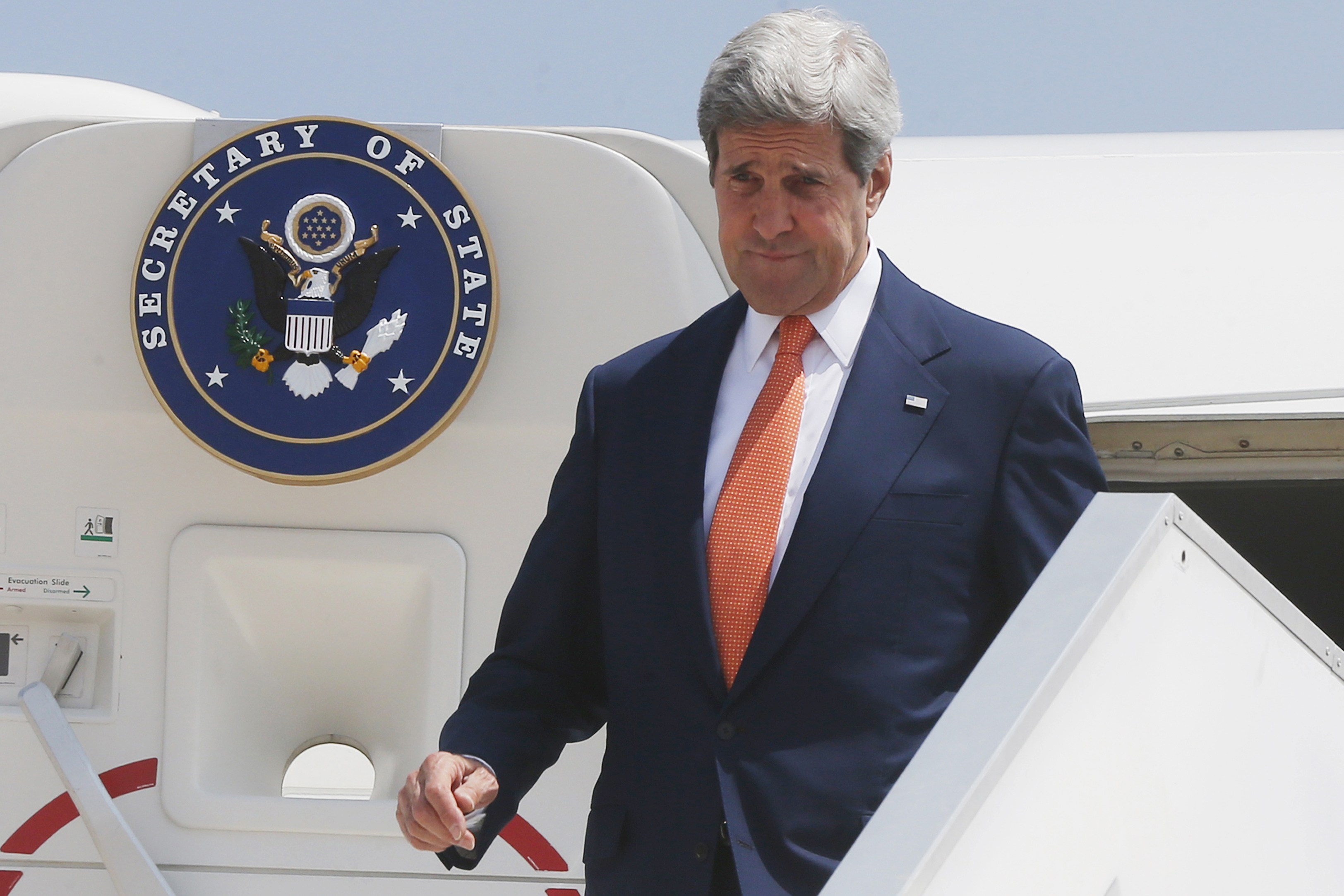 TEL AVIV, Israel -- Secretary of State John Kerry defied a Federal Aviation Administration ban and flew into Israel's main airport Wednesday in a sign of sheer will to achieve a cease-fire agreement in the warring Gaza Strip despite little evidence of progress in ongoing negotiations aimed at halting fighting that's left at least 31 Israelis and 650 Palestinians dead.

Kerry's arrival in Israel came as Israeli troops battled Hamas militants near a southern Gaza Strip town as dozens of Palestinian families trapped by the fighting scrambled to flee the area.

It also came as Israel closed the border crossing into Gaza at Erez "until further notice," citing the heavy fighting.

Kerry planned to meet with Israeli Prime Minister Benjamin Netanyahu, Palestinian President Mahmoud Abbas and United Nations Secretary-General Ban Ki-moon during what appeared to be a crucial day in the flailing talks.

Kerry reported some progress, reports the Reuters news agency, which quotes him as saying soon after he got to Jerusalem for a meeting with Ban,"We have certainly made some steps forward. There is still work to be done."

Still, U.S. officials have downplayed expectations for an immediate, lasting truce between Israel and the Hamas militant group that controls Gaza. At the least, Kerry's mission Wednesday sought to define the limits of what each side would accept in a potential cease-fire.

Kerry flew into Tel Aviv on an Air Force jet one day after the FAA banned commercial flights into Ben-Gurion International Airport. The FAA imposed the 24-hour restriction after a Hamas rocket landed within a mile of the airport on Tuesday. Many European carriers also scrapped flights to Israel.

The FAA was to announce Wednesday morning whether the ban would be extended.

A Palestinian health official said eight Hamas fighters died in the ferocious battle near Khan Younis, from where the Palestinian Red Crescent was trying to evacuate about 250 people. Khan Younis was under Israeli tank shelling and drones strikes since early Wednesday.

The Red Crescent said Hamas fighters in the area were deploying rocket propelled grenades and light weapons, including machine guns, against the Israelis.

The Palestinians say Israel is randomly deploying a wide array of modern weaponry against Gaza's 1.7 million people, inflicting a heavy civilian death toll and destroying large amounts of property there. By Wednesday morning, the Palestinian death toll stood at 650, according to Gaza health official Ashraf al-Kidra, most of them civilians.

Israel says it began the Gaza operation to halt Hamas rocket fire on its territory and to destroy a network of tunnels leading from Gaza to Israel that are intended to allow Hamas militants to carry out attacks against Israelis.

As the Gaza death toll mounted, a 34-year-old Palestinian man was killed in clashes with Israeli soldiers near the West Bank City of Bethlehem, a potentially ominous development in an area that has so far been relatively free of violence, despite the Gaza fighting.

Kerry flew to Tel Aviv from Cairo, where he met Tuesday with Egypt's president and other high-level officials. Egypt has proposed a cease-fire plan that is backed by the U.S. and Israel but has been rejected by Hamas.

The proposal calls for a 48 hour halt in fighting followed by intensive talks, explains CBS News correspondent Margaret Brennan, who is traveling with Kerry. In turning thumbs down on the plan, she says, Hamas insisted it it wouldn't stop firing unless Gaza's closed border with Egypt is opened to allow in food and medical aid and let some trapped Palestinian civilians out. But, Brennan notes, both the Israelis and the Egyptians fear that would enable Hamas to smuggle in more weapons.

Egyptian Foreign Minister Sameh Shukri said Tuesday's talks were focused "to not only resolve this issue, but also to set in motion once again the peace process that Secretary Kerry has been so actively involved in so as to end this ongoing conflict between the Palestinians and the Israelis."

It's unlikely that Washington is ready to wade back into the morass of peace negotiations that broke off last April after nearly nine months of shuttle diplomacy by Kerry. But the new round of fighting between Israel and Hamas militants who control Gaza has reached the level of violence that U.S. officials warned last spring would happen without an enduring truce.

Kerry stopped short Tuesday of advocating a new round of peace talks. Still, he left the door open for broad negotiations between Israel and Palestinian officials once a cease-fire is in place.

"Just reaching a cease-fire is clearly not enough," Kerry told reporters after meeting with Egyptian President Abdel-Fattah el-Sissi. "It is imperative that there be a serious engagement, discussion, negotiation regarding the underlying issues and addressing all the concerns that have brought us to where we are today."

Israel's Transportation Ministry called on U.S. and some European airlines Tuesday to reverse their decision to avoid the Jewish state, insisting Ben-Gurion Airport is safe and completely guarded and saying there is no reason to "hand terror a prize" by halting the flights.

Former New York City Mayor Michael Bloomberg announced he would fly to Tel Aviv Tuesday night on Israel's national carrier, El Al, "to show solidarity with the Israeli people and to demonstrate that it is safe to fly in and out of Israel."

"Ben-Gurion is the best protected airport in the world and El Al flights have been regularly flying in and out of it safely. The flight restrictions are a mistake that hand Hamas an undeserved victory and should be lifted immediately," Bloomberg said in a statement.

He urged the FAA to reverse its decision.