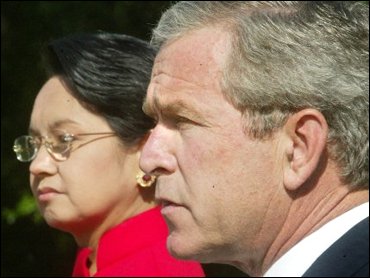 Philippine President Gloria Macapagal Arroyo, a staunch U.S. ally in the war on terror and in Iraqi reconstruction, was welcomed with the pomp of a state visit. It is only the third such visit of Mr. Bush's presidency, and the first by the head of state of an Asian nation.

At an East Room news conference, the president called Arroyo "a friend of America and a friend of freedom." He also named the Philippines a major "non-NATO ally," a designation that gives the country greater access to U.S. defense equipment and supplies.

Mr. Bush said there would soon be another deployment of U.S. forces to support Philippine-led anti-terrorism missions.

Arroyo said that while some nations feel hostile toward the United States, she believes that "U.S. leadership and engagement with the U.S. makes the world a safer place for all us to live in."

Mr. Bush, who plans to visit the Philippines in the fall, was also feting the Philippine leader with a state dinner in the evening.

The president considers a formal state visit a high honor, and has bestowed it on only the leaders of two other countries: Mexico and Poland.

The visit was seen as a payback for Arroyo's loyal support in the fight against international terrorism.

Arroyo was among the first world leaders to call President Bush and express condolences after the Sept. 11, 2001, attacks. Arroyo and Prime Minister Goh Chok Tong of Singapore were the only two Southeast Asian leaders to support the U.S.-led war in Iraq, and she expelled three Iraqi diplomats after Mr. Bush asked allies to do it. The Philippines is sending a 175-member humanitarian mission to postwar Iraq.

The president and Arroyo have a few personal things in common. Both are 56. Arroyo is the daughter of a former president; Mr. Bush is the son of one. Both took office on the same day in 2001.

Singapore's Goh visited Washington last week and signed an agreement that would wipe out tariffs and other trade barriers on about $33 billion in annual trade and give U.S. banks and companies more access to one of Asia's main financial centers.

She is seeking duty-free privileges for Philippine products, such as dried mangoes, pineapple juice and tuna. Arroyo also wants to see Philippine businesses get reconstruction contracts in Iraq and is trying to lure U.S. companies to invest in operations on the islands.

The bombings this week in Morocco and Saudi Arabia, as well as intelligence reports that suggest the possibility of terror attacks in Southeast Asia, add to the urgency of Arroyo's request for more U.S. military aid for the only former American colony.