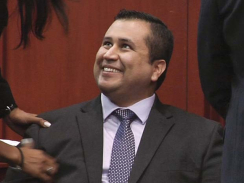 WKMG found bidding for the gun topping $200,000 early Friday. CBS News found it to be exponentially higher than that, but names given for bidders were all but certainly fake, and times listed for the bids were for hours later than when CBS News was on the site. CBS News could not verify the authenticity of anything on the page.

The gun was set to be auctioned starting Thursday at 11 a.m. on GunBroker.com, but by 11:18 a.m., the website said the listing for Zimmerman's Kel-Tec PF-9 9mm weapon had been removed. GunBroker.com released a statement on its website Thursday afternoon that addressed the listing.

At around 2:30 p.m. Thursday, UnitedGunGroup.com listed the same gun for auction, with the same starting bid price at $5,000, posted by someone with the username George Zimmerman. The site, which calls itself a "social market place for the firearms community, then apparently went down a few minutes later.

"As an organization, we stand by the rule of law and, while no laws have been broken, we do not feel like it is in the best interest of the organization to continue to host this sale on our platform," company officials said in a press release. "Our mission is to esteem the Second Amendment and provide a safe and secure platform for firearms enthusiasts and law-abiding citizens; our association with Mr. Zimmerman does not help us achieve that objective."

That online posting was later deleted. Todd Underwood, the founder of the group, later sent an email to CNN saying an official response would be released at 10 a.m. Friday.

The initial auction description appeared to have the same text as the original auction posting, in which Zimmerman wrote: "I am honored and humbled to announce the sale of an American Firearm Icon. The firearm for sale is the firearm that was used to defend my life and end the brutal attack from Trayvon Martin on 2/26/2012."

Zimmerman added that the gun had recently been returned to him by the Department of Justice.

Zimmerman claimed that he was selling the gun to raise money to "fight Black Lives Matter violence against law enforcement" and "Hillary Clinton's anti-firearm rhetoric."

Zimmerman said in the auction listing that he has received several offers for the gun, including from the Smithsonian Institution in Washington.

The Trayvon Martin Foundation said it had "no comment on the actions of that person," a report from The Guardian said.

Martin was shot and killed by Zimmerman on Feb. 26, 2012, after an altercation in a Sanford community.

Zimmerman was found not guilty of second-degree murder and manslaughter on July 13, 2013.

The shooting sparked protests and a national debate about race relations.

Anthony Ramos lives just doors down from Zimmerman in the same neighborhood where the shooting happened in 2012 and says he was stunned when he saw the gun up for auction Thursday morning.

What Ramos wasn't shocked about though, was that Zimmerman was back in the news. Since his 2013 acquittal, Zimmerman has been arrested in connection to domestic violence claims and shot at a year ago.

"It's exploitation," Oliver said. "It's for attention. He hadn't shot at anybody lately, he hadn't beat up on anybody lately, no one has shot at him in about a year, so it's time for him to raise the curtain on himself."