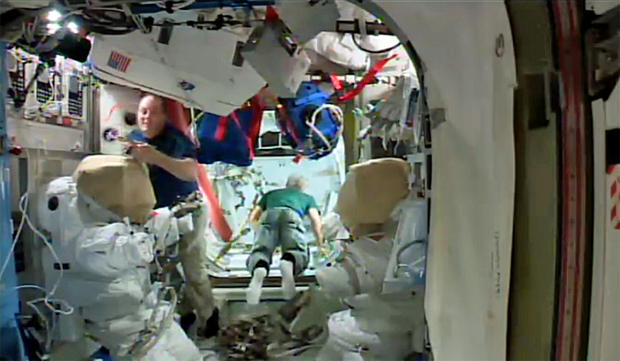 Astronauts aboard the International Space Station are making final preparations for a spacewalk Tuesday to service the lab's robot arm. With lawmakers optimistic about restarting the government after a weekend shutdown, NASA hopes to avoid what would have been a historic first, a publicly blacked-out spacewalk.

NASA public affairs operations were not deemed "mission critical" during the shutdown, and NASA's satellite television channel, web pages, Twitter feeds and other public outreach platforms were to be blacked out, or static, for the duration of the civil service furlough. No spacewalk coverage was planned.

"Sorry, but we won't be tweeting/responding to replies during the government shutdown," NASA said in a tweet Monday. "Also, all public NASA activities and events are cancelled or postponed until further notice. We'll be back as soon as possible! Sorry for the inconvenience."

But an expected Senate vote Monday afternoon to end the shutdown moved the issue back to the House of Representatives for concurrence. Assuming approval in the House, restarting the government would require President Trump's signature before agencies could begin their restart procedures. Whether that process can run its course before the start of the spacewalk was not immediately clear.

Politics aside, astronauts Mark Vande Hei and Scott Tingle plan to float out of the station's Quest airlock early Tuesday to replace the latching mechanism on one end of the station's robot arm. Another spacewalk to complete the work, this one carried out by Vande Hei and Japanese astronaut Norishige Kanai, is scheduled for Jan. 29.

NASA has never staged a spacewalk or any other comparable in-space event without public coverage of some sort, and it was not known how the agency would have handled an emergency under shutdown constraints with its television system, web operations and social media channels out of action.

But space station operations were expected to continue as usual despite the furlough, with mission control at the Johnson Space Center in Houston and critical communications facilities staffed as usual to support the six-member crew in orbit.

"From a space station operations standpoint, we've been up against this threat before," said Kenny Todd, ISS mission operations integration manager at the Johnson Space Center. "It really doesn't impact the way we do operations. It's an international program, we're working with a bunch of partners around the world, we're working with a bunch of investigators, some of the science and so forth has lifetime-type limits.

Along with space station operations, NASA also planned to continue support of on-going space missions like those in orbit around Mars or on its surface, the Juno Jupiter orbiter, the New Horizons probe to the outer solar system and various other solar, space weather and Earth-science probes.

But spacecraft on the ground being processed for launch, like the Parker Solar Probe and InSight Mars lander, could have been impacted by a lengthy shutdown.

NASA's shutdown plan, as described in a Nov. 30 letter to the Office of Management and Budget, was similar to the one the agency implemented during a shutdown in 2013.

"There are two major operations or classes of operations that would require ongoing support in accordance with the definitions of excepted activities," Andrew Hunter, NASA's acting chief financial officer, wrote to the OMB. "First, NASA currently is operating the ISS with a crew of six astronauts/cosmonauts.

"To protect the life of the crew as well as the assets themselves, we would continue to support planned operations of the ISS during any funding hiatus. Moreover, NASA will be closely monitoring the impact of an extended shutdown to determine if crew transportation or cargo resupply services are required to mitigate imminent threats to life and property on the ISS or other areas."

NASA's $8.8 billion James Webb Space Telescope, scheduled for launch in 2019, is NASA's most expensive science project, a high-priority mission that was relatively immune to the shutdown, at least in the near term.

The telescope's huge segmented mirror assembly and instrument package recently completed testing in a giant Apollo-era vacuum chamber at Johnson and engineers are preparing to ship it to prime contractor Northrup Grumman in California for integration with the spacecraft's power and propulsion systems and a complex sunshade.

"We're in the middle of critical operations here, those would continue to go," Bill Ochs, Webb telescope project manager, told reporters Jan. 10. "The last time there was an extended shutdown, we were in the middle of testing our instrument package ... and we were able to keep testing during that."

He said Northrop Grumman was already funded in the near term "so they can keep working until that funding runs out. We'll be working out over the next few weeks about how far that funding takes them. But right now, there would be no immediate impact."

NASA contractors were not immediately affected by the shutdown, but activities requiring direct government support would have been curtailed.

SpaceX currently is testing a powerful new rocket known as the Falcon Heavy at historic pad 39A at the Kennedy Space Center. The rocket, made up of three Falcon 9 core stages and a single upper stage, will generate more than 5 million pounds of thrust from its 27 core-stage engines when it takes off on its maiden flight.

SpaceX engineers had hoped to carry out a core stage engine test firing this week, but the 45th Space Wing, which oversees such tests at Kennedy and the nearby Cape Canaveral Air Force Station, released a statement over the weekend saying the government would not support any such static fire tests or launches for the duration of the shutdown.

SpaceX spokesman John Taylor said early Monday, before the Senate vote, that the company was "hopeful that the Congress will quickly resolve their differences and put our partners in the Air Force and NASA back to doing their important work as soon as possible."

"This shutdown impacts SpaceX's Falcon Heavy demonstration, which is critical for future NSS missions. It also impacts critical missions for our customers, including important international allies scheduled to launch shortly from Cape Canaveral and Vandenberg Air Force Base, as well as upcoming missions this spring to resupply the International Space Station."

Assuming a Senate agreement to end the shutdown gets House and presidential approval, SpaceX presumably would be cleared to proceed with testing in short order.

Along with launching the Falcon Heavy on its maiden flight, SpaceX also plans to launch a communications satellite for SES from the Cape Canaveral Air Force Station on Jan. 30, followed by launch of a Spanish military Earth observation satellite in mid February from Vandenberg.