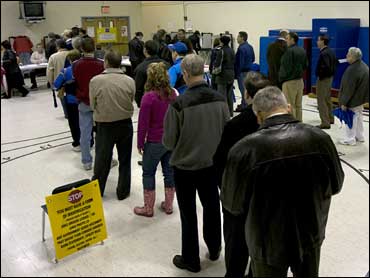 This story was written by David Mark.

After a primary season marked by record-shattering voter turnout, election officials across the country are bracing for what might be an Election Day like no other.

Many state and local election officials expect turnout in the Nov. 4 presidential election to exceed that of 2004, when voter turnout hit 61 percent - which was the highest level since 1968, according to the Center for the Study of the American Electorate.

"November could see the highest turnout of my lifetime," said Arizona Secretary of State Jan Brewer, 63. "Turnout could be up to as much as 80 percent."

Arizona, of course, is home to the presumptive Republican nominee Sen. . But election administrators across the country are warning of the possibility of a turnout tsunami, a prospect that both thrills and alarms them.

Much of that voter interest has been stoked by a drawn-out and highly competitive Democratic contest between two historic candidates. But interest also has been unusually high on the Republican side.

The first clue about this year's election came in the nation's first primary on Jan. 8 when more than 529,711 New Hampshire residents voted in the Democratic and Republican primaries, smashing the state's presidential primary record of 396,385 set in 2000.

While election administrators love to see higher-than-usual voter participation, the prospect of a turnout wave in November has many officials biting their nails over whether they'll be able to handle it. Throughout the protracted presidential primary season, complaints ranging from long lines at polls to ballot irregularities frequently surfaced, in addition to concerns voiced over the reliability of electronic voting systems.

In the Feb. 12 District of Columbia primary, many polling places ran out of paper ballots. A week earlier, precincts across California reported similar ballot shortages.

"During the primary season, there were a number of jurisdictions within states that appeared to be surprised by the turnout," said Dan Seligson, editor of Electionline.org, which tracks voting procedures and administration. "It's hard enough finding capable poll workouts for even a low turnout election. But in this kind of high interest election, the numbers just aren't there. We anticipate there could be significant lines on election days, among other problems, based on what we've seen in the primaries."

Though states have made significant strides since the 2000 Florida presidential election debacle, voting procedures are still deficient in many respects-even after passage of the Help America Vote Act (HAVA), which directed the federal government to pony up money to prepare states for Election Day.

In the past week alone, distinctly different problems have arisen. In Pennsylvania, which holds its primary April 22, officials were forced to take down a Web site that allowed residents to fill out voter registration forms on their personal computers after learning that it was possible to use the site to view other people's registration information, which included driver's license numbers or the last four digits of Social Security numbers.

In neighboring New Jersey, a group of couny clerks asked the state's attorney general to investigate voting discrepancies observed in e-voting machines used in the Feb. 5 primary. According to the state's Constitutional Officers Association, about 60 of the state's Sequoia Voting Systems e-voting machines produced discrepancies, usually a one- or two-vote difference, between the paper tape logged by the machine and the number of votes stored in the computer's memory cartridges.

Even states considered to have strong election administration systems have experienced problems.

In New Hampshire, a GOP presidential primary recount requested by gadfly candidate Albert Howard showed vote discrepancies. While McCain was initially reported to have won the primary with 88,713 votes, a Feb. 11 recount decreased that total to 88,571. Second-place finisher Mitt Romney dropped from 75,675 votes to 75,546 (Howard's vote tally actually increased from a grand total of 43 to 44.) Gardner blamed the discrepancies on problems with optical scan ballots used by some localities.

"Given how clear it was that there was going to be strong turnout this year, states and localities were woefully unprepared," says Tova Andrea Wang, a Democracy fellow at the Century Foundation. "We know that turnout is probably going to be incredible in the fall…It would not shock me to see some of these same problems in the general election."