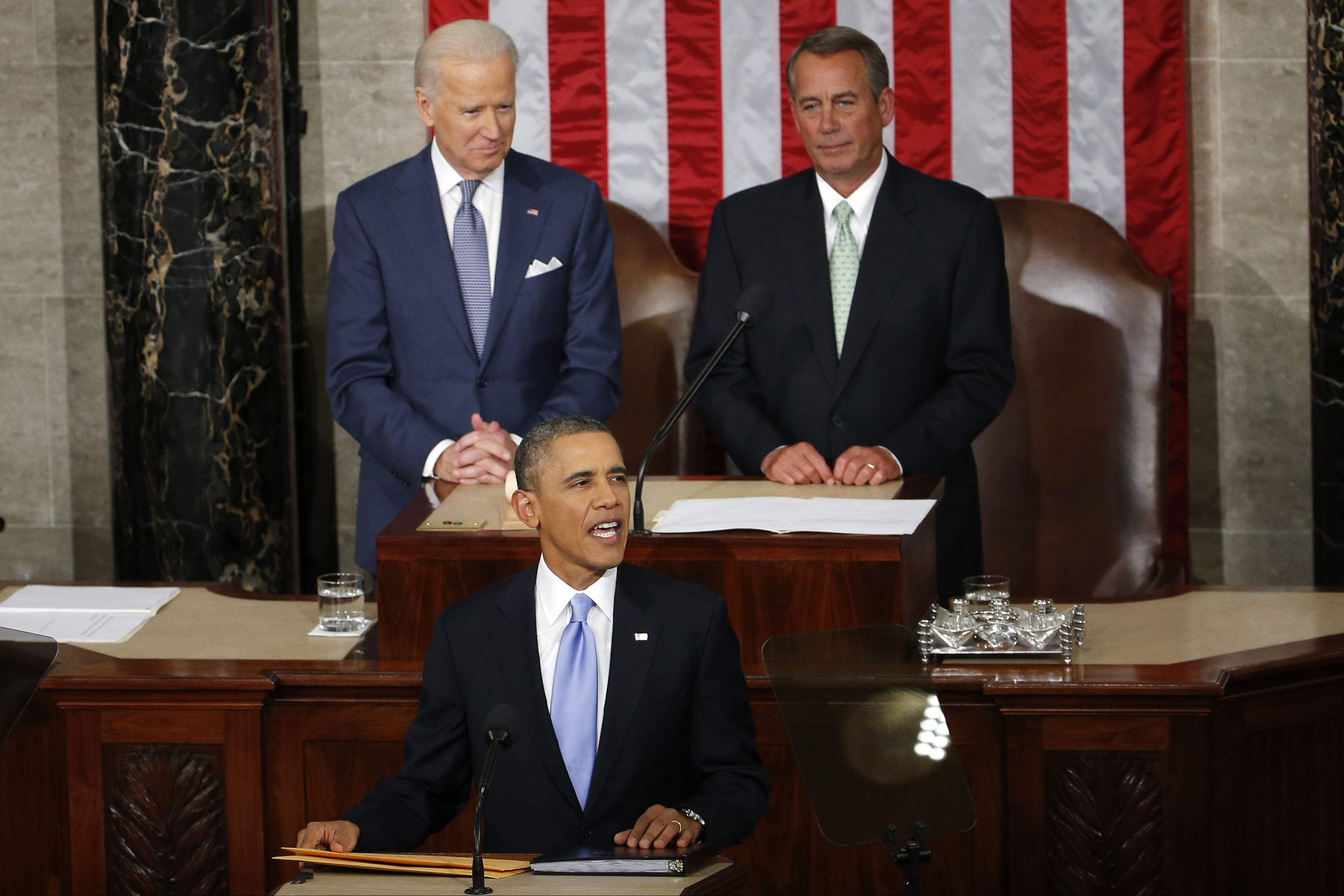 President Obama is calling on Congress to join him in “a year of action” in 2014 with a set of policies aimed at reversing the trend of growing inequality and stalled upward mobility in the United States.

Delivering his sixth annual address to Congress Tuesday night – known as a State of the Union address in all but the first year – Mr. Obama is once again reckoning with an economy that has not made a full recovery, one that has been kind to the wealthiest Americans and corporations but hard for millions who see their middle-class status slipping away.

“What I believe unites the people of this nation, regardless of race or region or party, young or old, rich or poor, is the simple, profound belief in opportunity for all – the notion that if you work hard and take responsibility, you can get ahead,” the president said. "Let’s face it: that belief has suffered some serious blows.  Over more than three decades, even before the Great Recession hit, massive shifts in technology and global competition had eliminated a lot of good, middle-class jobs, and weakened the economic foundations that families depend on.”

Mr. Obama said that the job of the government must be to “reverse the tides” of growing corporate profits and stock prices alongside stagnant wages and unemployment for average Americans. The central promise of Tuesday’s address is he has recommitted himself to that endeavor, with or without Congress.

“What I offer tonight is a set of concrete, practical proposals to speed up growth, strengthen the middle class, and build new ladders of opportunity into the middle class.  Some require congressional action, and I’m eager to work with all of you,” he said. “ But America does not stand still – and neither will I.  So wherever and whenever I can take steps without legislation to expand opportunity for more American families, that’s what I’m going to do.”

Mr. Obama's 65-minute speech comes after a long year that saw many of his top goals like gun control and immigration reform stall in Congress. Gun control, in particular, was a prominent part of the 2013 State of the Union, which came just a few months after a shooting rampage at Sandy Hook Elementary School in Newtown, Conn. After all proposed legislation failed in Congress, it got just a passing mention this year.

"I have seen the courage of parents, students, pastors, and police officers all over this country who say “we are not afraid,” and I intend to keep trying, with or without Congress, to help stop more tragedies from visiting innocent Americans in our movie theaters, shopping malls, or schools like Sandy Hook," Mr. Obama said, the words of a president who is, on many issues. out of options.

Democrats and Republicans also remained as divided as ever on issues of federal spending and the size of government throughout the year, culminating in a 16-day shutdown last October.

Those arguments are important, Mr. Obama said, but can't stop the government from fulfilling its duties.

"When that debate prevents us from carrying out even the most basic functions of our democracy – when our differences shut down government or threaten the full faith and credit of the United States – then we are not doing right by the American people," he said.

The speech did contain several issues on which the president called for bipartisan action, including tax reform, undoing budget cuts to research, and immigration reform. Many of the issues will fall victim to bipartisan bickering, although Republicans say they are planning to tackle the issue of immigration in the coming months.

"If we are serious about economic growth, it is time to heed the call of business leaders, labor leaders, faith leaders, and law enforcement – and fix our broken immigration system.  Republicans and Democrats in the Senate have acted.  I know that members of both parties in the House want to do the same," he said. "Independent economists say immigration reform will grow our economy and shrink our deficits by almost $1 trillion in the next two decades.  And for good reason: when people come here to fulfill their dreams – to study, invent, and contribute to our culture – they make our country a more attractive place for businesses to locate and create jobs for everyone.  So let’s get immigration reform done this year."

On other issues he struck a less conciliatory tone. Mr. Obama spent several minutes doubling down on his all-of-the-above energy strategy, which has emphasized natural gas production and reducing carbon pollution.

"The debate is settled.  Climate change is a fact.  And when our children’s children look us in the eye and ask if we did all we could to leave them a safer, more stable world, with new sources of energy, I want us to be able to say yes, we did," the president declared, which drew loud cheers from Democrats but stony silence from many Republicans.

With the conflict in Afghanistan winding down, international issues largely took a back seat to domestic ones. President Obama spent a few minutes reflecting on the need to continue searching out and disabling terrorist networks, and only once mentioned his controversial drone policies and surveillance programs. He made just a passing reference to the reforms to the National Security Agency's intelligence gathering even though he gave a long speech on the issue earlier this month.

Much of his work over the next three years could revolve around diplomacy rather than the military. Mr. Obama reiterated a pledge that he will veto any new Iran sanctions from Congress, which the administration says

could undermine a temporary deal to halt Iran's nuclear program in exchange for limited sanctions relief while world leaders work on a larger agreement.

"For the sake of our national security, we must give diplomacy a chance to succeed," Mr. Obama said. "If Iran’s leaders do not seize this opportunity, then I will be the first to call for more sanctions, and stand ready to exercise all options to make sure Iran does not build a nuclear weapon.  But if Iran’s leaders do seize the chance, then Iran could take an important step to rejoin the community of nations, and we will have resolved one of the leading security challenges of our time without the risks of war."

In a speech set to begin after the president’s address, Rep. Cathy McMorris Rodgers, R-Wash., will argue on behalf of the GOP that the economy has stagnated because of, not in spite of, the president’s efforts.

"Last month, more Americans stopped looking for a job than found one.  Too many people are falling further and further behind because, right now, the President’s policies are making people’s lives harder," McMorris Rodgers said.

She offered an overview of the Republican alternatives, including jobs bills that require no additional government spending, building more parental choice into the education process, and, most importantly, rolling back parts of the Affordable Care Act.

"No, we shouldn’t go back to the way things were, but this law is not working," McMorris Rodgers said. "Republicans believe health care choices should be yours, not the government’s."

She argued that the Republican vision focuses on empowering people over the government and ensuring that Washington plays by the same rules as the American people.

The president dedicated a few minutes of his speech defending the Affordable Care Act, leading with the story of Amanda Shelley, one of his guests at the speech, who got emergency surgery on Jan. 6, less than a week after she was able to obtain insurance coverage under the law.

He said that he didn't expect to "convince my Republican friends on the merits of the law."

"But," Mr. Obama continued, "I know that the American people aren't interested in refighting old battles. So again, if you have specific plans to cut costs, cover more people, and increase choice -- tell America what you'd do differently. Let's see if the numbers add up."

In addition to McMorris Rodgers, three other Republicans are planning other responses. Sen. Mike Lee, R-Utah, will speak on behalf of the Tea Party Express, which bills itself as the nation’s largest tea party political action committee. Sen. Rand Paul, R-Ky., will videotape his own response. And Rep. Ileana Ros-Lehtinen, R-Fla., will deliver a response in Spanish to air on Spanish-language media.

In attendance Tuesday: most of Congress, the Supreme Court and the president’s Cabinet. Following a decades-long tradition, however, one cabinet member watched the speech from an undisclosed location where they would be safe from harm and able to assume the presidency in the event of an attack on the country. This year, the cabinet member will be Energy Secretary Ernest Moniz, who is 15th in the line of succession to the presidency.