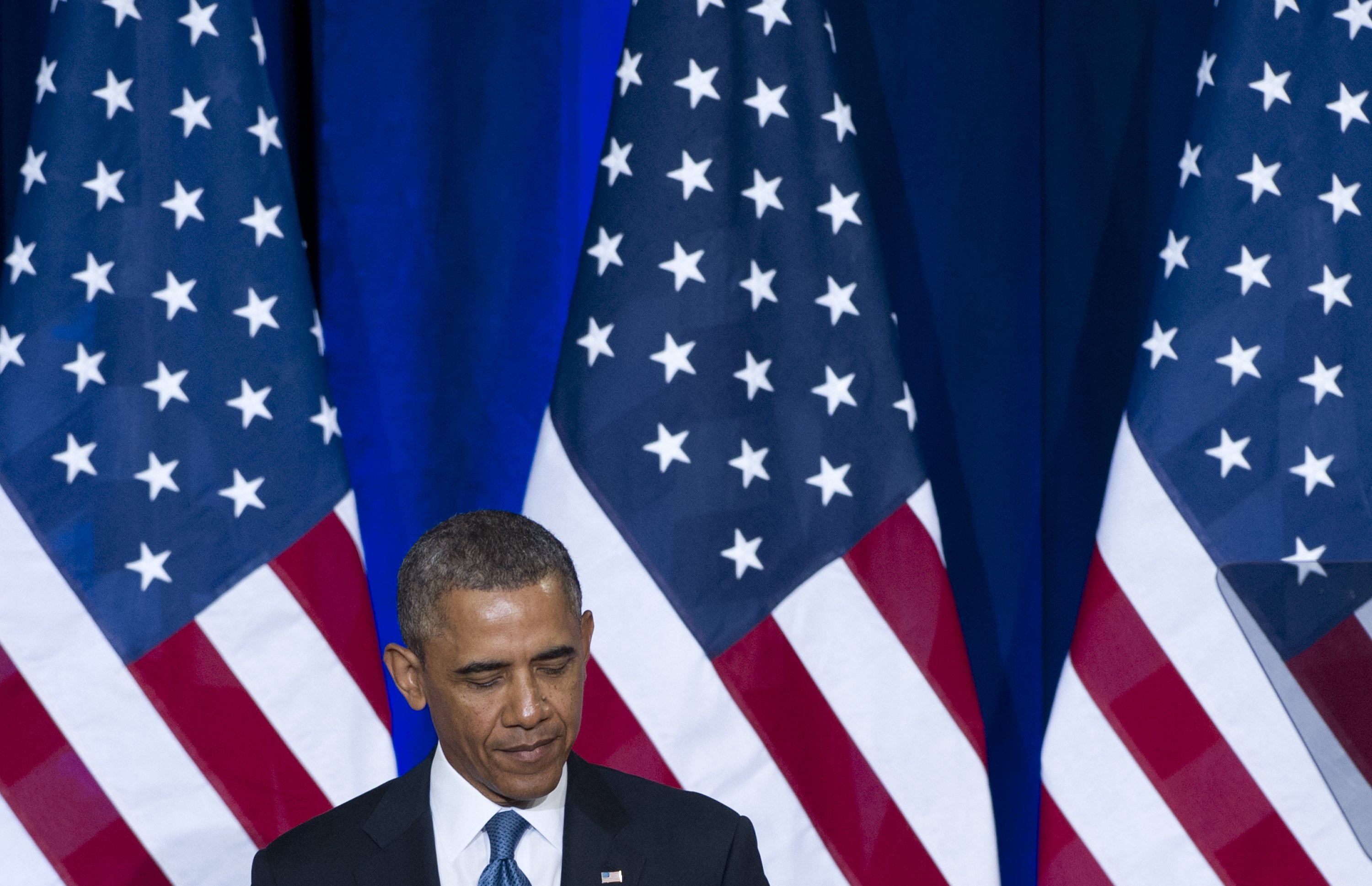 President Obama on Friday announced a series of reforms to the nation’s surveillance apparatus, including steps to add more privacy safeguards to a controversial National Security Agency program that collects Americans’ phone records in bulk. The reforms, however, leave a number of open questions for Congress and other government officials to resolve.

“We have to make some important decisions about how to protect ourselves and sustain our leadership in the world, while upholding the civil liberties and privacy protections that our ideals – and our Constitution – require,” Mr. Obama said in a speech delivered from the Justice Department.

Most significantly, Mr. Obama is requiring the NSA to get judicial approval before querying its vast database of telephone metadata.

Effectively immediately, the president is also reducing the number of data connections surveillance analysts can use to tie communications of terrors suspects to phone numbers. These so-called “hops” previously could be used three times by analysts to develop a potential pattern or matrix of sources or terrorist affiliations, but Mr. Obama is reducing the number of “hops” from three to two.

In addition to those steps, Mr. Obama is asking Attorney General Eric Holder and the intelligence community devise a way to transfer the metadata database from the government to a third party -- whether it is telecommunications firms or some yet-to-be created entity.

While Holder and the intelligence community considers what third party could hold onto the metadata, Mr. Obama is also asking them to consider what they can do with other existing programs to map terrorist connections.

The steps Mr. Obama announced, a senior administration official told reporters Friday, are “without a doubt the most significant reform in our surveillance programs since President Obama took office.” While the president says he welcomes the debate over these programs, they were prompted by the information leaked by former government contractor Edward Snowden.

Mr. Obama said Friday he would not “dwell on Mr. Snowden’s actions,” noting that he delivered a speech last year at the National Defense University -- before the Snowden revelations -- calling for  a more robust public discussion about the balance between security and liberty.

Still, senior administration officials acknowledged Friday morning that the reforms announced today are targeting the metadata collection -- currently authorized under Section 215 of the Patriot Act -- because that program “has been of the greatest interest” since the Snowden leaks in June. The president, while announcing reforms to other facets of intelligence gathering, isn’t reforming any other programs specifically authorized under Section 215.

“What the administration trying to do is less about a broader balancing of our intelligence collection and posture and more about addressing the controversies,” CBS News Senior National Security Analyst Juan Zarate said. “These appear to be targeted fixes to specific controversies.”

“Why is AT&T having the data, rather than the government, any better?” Zarate asked. “I elect my government, I know what the oversight is -- if Google is going to run this, what control do I have over data?”

Requiring telephone companies to hold data “could require companies to alter their procedures in ways that raise new privacy concerns,” he said. “On the other hand, any third party maintaining a single, consolidated data-base would be carrying out what is essentially a government function with more expense, more legal ambiguity, and a doubtful impact on public confidence that their privacy is being protected.”

He added, “More work needs to be done to determine exactly how this system might work.”

The president has asked Holder and the intelligence community to report back to him by March 28, the date by which this program needs to be reauthorized. In the meantime, he said he would consult with Congress to see their views and get congressional reauthorization as needed.

Rep. Adam Schiff, D-Calif., a member of the House Intelligence Committee, has introduced legislation that would codify the changes the president came close to endorsing -- his bill would require the government to obtain metadata records on a case-by-case basis from telephone companies. He told CBS News that passing any legislation on this issue could be a challenge. “I would encourage the administration to do as much as it can administratively,” he said.

On the other hand, Schiff pointed out that there’s some incentive for Congress to act at least before June 2015 -- at that point, because of a “sunset provision” in the Patriot Act, the program would totally expire unless Congress explicitly reauthorizes it.

“For those that don’t really want to see reform... if they’re unwilling to compromise, the program is going to be gone all together,” Schiff said.

Along with the reforms to the telephone metadata collection program, Mr. Obama also announced reforms to multiple other surveillance programs along with a series of reforms to the levers of power used to manage these programs:

Surveillance authorized under Section 702 of the FISA Amendments Act: Section 702 is intended to let the government collect the content of communications from foreigners, but Americans’ communications are easily ensnared during the intelligence gathering. Mr. Obama said that he is asking Holder and Director of National Intelligence James Clapper to place greater restrictions on the government’s ability to retain, search, and use communications between Americans and foreign citizens that is “incidentally” swept up.
FBI’s use of National Security Letters: The FBI uses national security letters to obtain so-called business records (like credit card statements or phone records) without any court approval, and without disclosing the orders to the subject of the investigation. An advisory panel that Mr. Obama convened to review surveillance programs recommended -- among dozens of strong recommendations -- that national security letters be subject to judicial review. Mr. Obama didn’t go that far.
"I have concerns that we should not set a standard for terrorism investigations that is higher than those involved in investigating an ordinary crime,” Mr. Obama said Friday in response to that suggestion. “But I agree that greater oversight on the use of these letters may be appropriate, and am prepared to work with Congress on this issue.”

He did, however, say he’s directing Holder to amend the use of national security letters so that they cannot remain secret indefinitely -- the government will need to establish the need for secrecy by a certain point, or a letter’s secrecy will expire.

“These are cases in which it is important that the subject of the investigation, such as a possible terrorist or spy, isn’t tipped off,” Mr. Obama said. “But we can – and should – be more transparent in how government uses this authority.”

Foreign Intelligence Surveillance Act (FISA) Court reform: While the FISA court, up to this point, did not have to review individual queries of metadata, it did grant the NSA authority at various intervals to collect the data in bulk. The court has come under fire for hardly ever rejecting government surveillance applications. One criticism of the court is that it only hears the government’s perspective -- there is no adversary to argue on behalf of the subjects of surveillance.

To improve the court’s perspective, Mr. Obama on Friday called on Congress to establish “a panel of advocates from outside government to provide an independent voice in significant cases” before the FISA court.

Oversight within the executive branch: In a presidential directive issued Friday, Mr. Obama ordered an annual administrative review of intelligence priorities. He also announced that new oversight officials will be appointed in the White House and the State Department.

Greater transparency: Mr. Obama said he is ordering Clapper, in consultation with Holder, to review any future FISA court opinions “with broad privacy implications” for the purpose of declassifying them.

He will also take steps to let communications providers make public more information about government requests they receive for data.

Surveillance of foreign heads of state: Absent a compelling national security purpose, the U.S. government will not monitor heads of state of close U.S. allies.

“Heads of state and government with whom we work closely, and on whose cooperation we depend, should feel confident that we are treating them as real partners,” Mr. Obama said.

Bolstering protections for non-U.S. persons overseas: The presidential directive issued Friday specifies what the U.S. does and does not do in overseas surveillance. For instance, Mr. Obama said, “the directive makes clear that the United States only uses signals intelligence for legitimate national security purposes, and not for the purpose of indiscriminately reviewing the emails or phone calls of ordinary people.”

On top of that Mr. Obama has taken what he called the “unprecedented step” of extending certain American protections to people overseas. He directed Holder and Clapper to develop safeguards to limit the duration in which the U.S. can hold personal information from people overseas, while also restricting the use of this information.

“The bottom line is that people around the world – regardless of their nationality – should know that the United States is not spying on ordinary people who don’t threaten our national security, and that we take their privacy concerns into account,” Mr. Obama said.

Answering the broader questions: Mr. Obama also announced he’s asked his counselor John Podesta to lead a comprehensive review of big data and privacy. Podesta will lead a group of government officials who, along with the President’s Council of Advisors on Science and Technology, will reach out to privacy experts, technologists and business leaders to discuss the challenges of “big data” and how to potentially create international norms for managing such data.

“Ultimately, what’s at stake in this debate goes far beyond a few months of headlines, or passing tensions in our foreign policy,” Mr. Obama said. “When you cut through the noise, what’s really at stake is how we remain true to who we are in a world that is remaking itself at dizzying speed.”

Mr. Obama’s reforms elicited a wide range of opinions from Congress on Friday. Schiff said in a statement he is pleased with the president’s concrete steps to improve privacy protections and oversight. “Though the steps announced today are important, it will be up to Congress to implement many of these changes, as well as others, and to ensure that they are durable across future Administrations,” he said.

“After the long push to rein in overbroad surveillance powers, we are very pleased that the President announced his intent to end the bulk collection of Americans’ phone records," the senators said. "Ending this dragnet collection will go a long way toward restoring Americans’ constitutional rights and rebuilding the public’s trust. Make no mistake, this is a major milestone in our longstanding efforts to reform the National Security Agency’s bulk collection program."

However, other lawmakers interested in protecting civil liberties -- from both sides of the aisle -- were more critical.

Sen. Rand Paul, R-Ky., said in a statement that he is “encouraged” by the president’s reforms but disappointed in the details.

“The Fourth Amendment requires an individualized warrant based on probable cause before the government can search phone records and e-mails. President Obama's announced solution to the NSA spying controversy is the same unconstitutional program with a new configuration,” Paul said. “I intend to continue the fight to restore Americans rights through my Fourth Amendment Restoration Act and my legal challenge against the NSA. The American people should not expect the fox to guard the hen house.”

Rep. Peter Welch, D-Vt., similarly said he appreciated the president’s efforts. However, he said, “the steps he announced today fall short of reining in the NSA.”