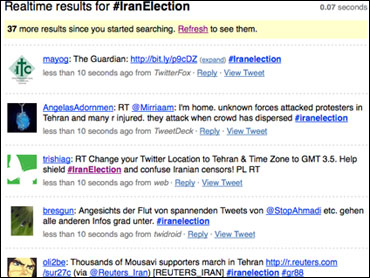 (CBS)
A senior official has confirmed that the State Department asked Twitter to delay a schedule maintenance shutdown and keep the social networking site running over the past weekend, when it was slated to be offline.

The action was seen as a likely effort to maintain communication with users in Iran, where the contested presidential election has sparked a series of increasingly violent demonstrations and protests.

At the State Department Briefing today, spokesman Ian Kelly acknowledged that officials had been communicating with Twitter and other media sites, but refused to comment on whether those conversations were in reference to Iran.

"I know the secretary has a - wants a big push for Diplomacy in using these new social media to develop horizontally communities," he said. "And of course, twitter is another one of those social media."

As the fallout over President Mahmoud Ahmadinejad self-proclaimed presidential victory continues, websites like Twitter, MySpace and Facebook have become popular modes of communication for Iranians on both sides of the debate - allowing them to organize, mobilize and share their stories with the rest of the world.

Despite its timely talks with Twitter, the State Department continues to assert neutrality on the issue, emphasizing that whatever the election results, they should reflect the will of the Iranian people.

"We're trying to avoid any kind of appearance of this being about the U.S. We don't want to appear as meddling in this whole process," he said. "Again, this is not about us."