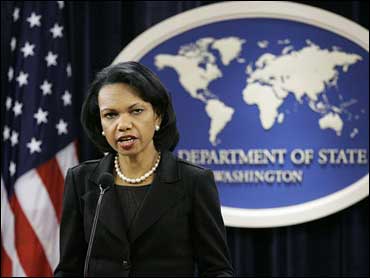 A House lawmaker on Tuesday complained to Secretary of State Condoleezza Rice about the alleged muzzling of State Department officials in inquiries involving Blackwater USA and Iraq's government.

Rep. Henry Waxman, D-Calif., chairman of the Oversight and Government Reform Committee, said the State Department had informed the committee that State employees could not discuss potential corruption in the government of Iraqi Prime Minister Nouri al-Maliki unless the information was treated as a national security secret.

Blackwater USA, the North Carolina-based security contractor involved in the deaths of civilians in Iraq this month, has also claimed that the State Department had banned company communication with Waxman's investigators, the lawmaker said.

"I urge you to reconsider the unusual positions you are taking," Waxman wrote to Rice. "You are wrong to interfere with the committee's inquiry."

The State Department said it was cooperating with the committee and is providing the information requested.

"Blackwater has been informed that the State Department has no objection to it providing information to the committee," said Tom Casey, a State Department spokesman. "We have offered to make available for testimony those officials in the best position to respond to the specific issues the committee has raised."

Waxman said his staff was told Monday that State Department officials with what he called "direct knowledge of corruption within the Maliki government" were barred from giving the committee "assessments which judge or characterize the quality of Iraqi governance," or Baghdad's ability to address corruption, unless the material was withheld from the public.

In the Blackwater matter, Waxman said the company claimed that the State Department insisted on reviewing and approving any documents the company gave to the committee.

According to the Los Angeles Times, a letter sent last week to a senior Blackwater executive by a State Department official ordered the company "to make no disclosure of the documents or information" about its work in Iraq without approval.

Waxman also said Rice has refused to testify before his committee about the status of political reconciliation in Iraq, potential corruption or the Blackwater incident.

Rice has ordered a review of security practices for U.S. diplomats in Iraq following the killing of 11 Iraqis this month while Blackwater guards were protecting a U.S. Embassy convoy.

Waxman has scheduled a hearing on the Blackwater incident for next Tuesday, the Times reported, but Blackwater attorneys said the State Department's letter may make it "difficult, if not impossible" for company executives to testify.

Waxman and Rice tangled earlier this year when she refused to appear in person to answer questions about the Bush administration's prewar intelligence. Rice said she already has addressed claims that Iraq had sought uranium from the African nation of Niger.