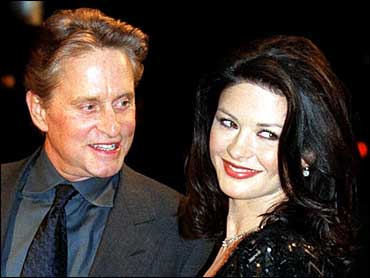 When the organizers of the annual Nobel Peace Prize concert asked actor Michael Douglas to host the event, he agreed but asked if his wife, actress Catherine Zeta-Jones, could lend a hand.

"That was our first choice, but we didn't dare to ask for both at the same time," concert organizer Odd Arvid Stroemstad said Thursday. "It didn't take us long to say 'yes."'

Douglas and Zeta-Jones, both Academy Award winners, will act as co-masters of ceremony at the Dec. 11 concert in Oslo, the day after Iranian lawyer, writer and human rights activist Shirin Ebadi accepts her 2003 Nobel Peace Prize.

The traditional Nobel concert will be carried live in more than 100 countries.

"My impression is that it is getting better and better known," said Stroemstad. "We can see every year that the artists are very positive to invitations."

Since planning starts in January, the artists invited to the concert aren't typically connected to the winner, who is announced in October.

"But we do usually make a few late additions, to reflect the winner," said Stroemstad.

Ebadi was selected for this year's prize Oct. 10, the first Muslim woman to receive it. She was lauded for her efforts in promoting the rights of women and children in Iran and worldwide. She will receive the $1.3 million prize Dec. 10.

The award will be marked by a solemn ceremony at the Oslo City Hall, a torchlight parade in Ebadi's honor and a banquet, followed by the Dec. 11 concert.