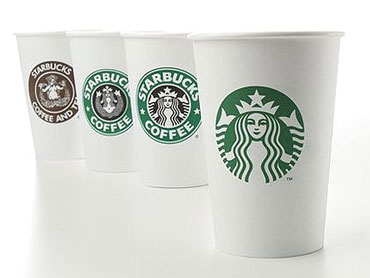 Starbucks Corp. is giving its siren a facelift.

The world's largest coffee company is unveiling a new logo Wednesday that drops the words encircling its iconic sea nymph and gives her a few subtle updates.

Starbucks says the changes amount to more than nips and tucks to its favorite lady. The fresh look goes with a new direction for the company as it makes its way back from its toughest times in its 40-year history.

Prior versions of the logo helped build Starbucks into one of the world's best recognized brands, and the company felt it no longer needed to reinforce its name at every turn. The new wordless logo also is better suited to the company's expansion beyond coffee into a wider array of business lines and into more international markets.

Starbucks plans to unveil the logo to employees Wednesday and bring it to stores in March to coincide with its 40th anniversary.

"What is really important here is an evolutionary refinement of the logo, which is a mirror image of the strategy," said Howard Schultz, CEO of Starbucks. "This is not just, let's wake up one day and change our logo."

This is the fourth version of Starbucks' logo since the company's beginnings as a small coffee, tea and spice shop in Seattle in 1971. The first update came in 1987, taking the original bare-breasted siren in brown to a more stylized and modest version in green as the company began to expand. The image was further refined in the 1990s as the company went public and its growth soared.

Starbucks eventually suffered from its own success. It grew too far, too fast and began drawing criticism that it had become the Wal-Mart of coffee. Its luster further faded as the recession hit and consumers drank coffee at home or went to lower-priced competitors like McDonald's Corp., which had upped their coffee offerings. The coffee's giant's sales and stock price both fell.

The company also expanded its product lines introducing Via, its first instant coffee. It increased its emphasis on beans, ice cream and other packaged goods sold in grocery stores. And it put a big push on its other business lines like Tazo tea and Seattle's Best Coffee. Starbucks ramped up its plans for international markets, like China, where it now has 400 stores on the mainland and plans to open hundreds more in coming years.

"We're sitting today with record revenue, record profit; the stock price is at a five-year high. This isn't an accident," Schultz said.

Starbucks leaders say the changes to the logo are in some ways a metaphor for the company dropping the boundaries of its own business and growing into new areas. Marketing experts agree.

"The brand is now evolving to a point where the coffee association is too confining and restrictive," said John Quelch, a marketing professor at Harvard Business School. "Starbucks is fundamentally selling an experience, but by no means is coffee the only part of the experience. It is important that they not have a logo that is too confining."

Starbucks looked to companies like Nike Inc. and Apple Inc., which had earned the clout with consumers to drop the words from their logos. And it closely watched the missteps of others, such as Gap Inc., which launched a new logo in October only to withdraw it after harsh criticism by customers and others.

Starbucks sees other changes ahead under its new banner: it's testing a system for customers to order and pay for coffee by mobile phone. It's seeking a way for rewards card holders to earn points buying Starbucks products at grocers or other stores. And it's considering offering beer and wine at night in some of its cafes. Starbucks also suggested it is looking at new food business opportunities, though company officials would not disclose details.

"I've never been more excited about the future of the company, I'll tell you that," Schultz said.