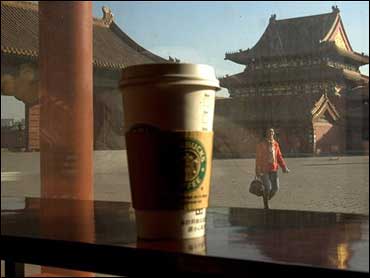 Starbucks has closed a coffeehouse in China's former imperial palace, the company said Saturday, ending a presence that sparked protests by Chinese critics who said it damaged a key historical site.

The controversy over Starbucks at Beijing's 587-year-old Forbidden City has highlighted Chinese sensitivity about cultural symbols and unease over an influx of foreign pop culture.

"It was a very congenial decision. We respect what they are doing," Woon said.

The Starbucks opened in 2000 at the invitation of palace managers, who needed to raise money to maintain the 178-acre complex of villas and gardens. But critics said it was inappropriate. An anchor for Chinese state television led an online protest, saying the coffeehouse diminished Chinese culture.

Starbucks was offered the option of becoming part of a combined outlet with other beverage brands all sold under the Palace Museum brand name, according to Woon and Chinese news reports, which cited the palace's vice president, Li Wenru.

"There were several choices, one of which was to continue, but it would not carry the Starbucks name any more," Woon said. "We decided at the end that it is not our custom worldwide to have stores that have any other name, so therefore we decided the choice would be to leave."

Seattle-based Starbucks Corp. opened its first coffeehouse in China in 1999 and now has 250 mainland outlets. Its success has spawned a series of Chinese imitators. Starbucks chairman Howard Schultz described China last year as the company's No. 1 growth market.

The Forbidden City was home to 24 emperors before the end of imperial rule in 1911. It is China's top tourist attraction, drawing some 7 million visitors a year. Other businesses there include bookstores, souvenir shops and Chinese-style teahouses.

The palace is in the midst of a renovation, due to last through 2020, to restore the site to its imperial-era appearance. That includes removing a five-story archive museum and toning down commercial symbols. The number of shops on its grounds has been cut from 37 to 17, according to state media.

"Those businesses that remain in the Forbidden City must carry out reforms," the newspaper Beijing Daily quoted Li, the vice president, as saying. It gave no details.

Starbucks was a popular resting spot for palace visitors, but attracted criticism from the start. The company agreed shortly after opening to lower its profile by removing its exterior sign.