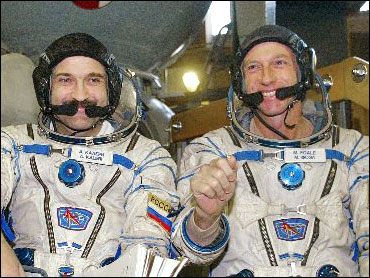 It was just four high-energy batteries, the kind that are found in a lot of military equipment such as walkie-talkie sets and night vision equipment. Similar batteries already were being used on the international space station.

But when NASA officials discovered last year that Russian space officials were allowing the four batteries on-board the space station without the proper testing, they objected strenuously. The batteries could be toxic and had a small potential to explode. The Russians went ahead anyway.

Nothing ever happened. But the friction caused by the batteries underscores the divide between the now hyper-safety-conscious Americans and what the Russians describe as their "more flexible" approach.

It's a different philosophy, explains Shirley McCarty, former head of NASA's safety advisory board: In the U.S. program you must prove it is safe. The Russian approach is "prove it's not safe."

After the Columbia space shuttle disaster, safety is getting even more attention by the U.S. space program.

Tensions over the two countries' approaches are being played out in Houston and Moscow as both programs debate whether to allow a spacewalk by the current space station crew of just two men — astronaut Michael Foale and cosmonaut Alexander Kaleri. A spacewalk would leave the space station temporarily empty. Previous spacewalks at the international space station have depended on a third crew member inside.

The Russians, however, are comfortable with the risk and carried out spacewalks on their Mir space station with just a two-man crew. They are pushing for a spacewalk in late February to do minor work involving payloads and preparatory work for a new type of cargo ship.

The Russians consider themselves less rigid and more inventive than the Americans, who tend to follow every letter in the technical manuals, said Sergei Gorbunov, a spokesman for the Russian Space Agency.

It may not be a fault, but the different approaches contribute to communications problems that could lead to dangerous situations, NASA's safety advisory board warned in a report last year.

"They share safety concerns," Michael Suffredini, the station's operations and integration manager for NASA, said last week of the Russians. "Sometimes we have a different view."

Jerry Linenger, a former astronaut who lived aboard Russia's Mir in 1997, said there has to be a "happy medium" between the two approaches.

During Linenger's stay on Mir, the Russian space station suffered the most severe fire ever aboard an orbiting spacecraft, a near collision with a cargo ship, failures of onboard systems including an oxygen generator, loss of electrical power and an uncontrolled tumble through space.

The current space station crew also is experienced with close calls. Foale was on Mir when it collided with a cargo ship. Kaleri was on Mir along with Linenger when the fire broke out.

The differences between the Russian and U.S. approaches to safety are as much from cultural as economic factors, said Linenger.

Russian industry, for instance, doesn't have the commitment to worker safety that the United States has adopted in recent decades through agencies such as the Occupational Safety and Health Administration. In addition, workers in the Russian space program haven't shaken off the Soviet-era habit of following orders without question, Linenger said.

"The Russians don't want to lose a cosmonaut any more than we want to lose an astronaut," he said, but suggested that perhaps they were "less used to protecting the worker ... They're probably more willing to overlook a lot of things that we're not."

The limited budget of the Russian space program also contributes to how it approaches safety, Linenger said. The cash-strapped space agency, after all, has allowed U.S. millionaire Dennis Tito and South African Mark Shuttleworth to pay for the privilege of being space tourists on the station despite the initial objections of NASA officials.

Most recently, the Russian space program disclosed that government funds allocated for building crew capsules and supply ships for the space station are only about half of what's needed.

"When you have a limited budget like they did when I was there, you can't afford to go to option B," Linenger said. "Maybe we misinterpret that they're cavalier about things when they have no options."

Linenger noted that NASA recently decided to send the current crew to the space station despite concerns from a NASA physician and scientist that exercise equipment and some water and air monitoring devices weren't working properly.

"When you're between a rock and a hard place, I'm not sure we would act any differently," he said.

Ed Lu, who returned from the space station last month after a six-month stay, said any differences in approaches to safety aren't noticeable.

"It's really one big program right now," he said during an interview from space before his return. "You can't really separate the organizations too much anymore."

But members of NASA's Aerospace Safety Advisory Panel felt otherwise. They resigned en masse in September after being described as ineffective in a report by the Columbia Accident Investigation Board. Before resigning, members cited two other recent incidents in which miscommunication between the Russians and Americans on the ground had caused problems with how the space station was positioned.

"It just seems all the required operating procedures, the ground rules aboard the station, really hadn't been completely planned out between the various international partners," said Robert Schaufele, a former member of the safety panel and a professor of aircraft design at California State University.

But the two programs have learned from past problems, and new procedures have been put in place, said Bill Gerstenmaier, the space station's program manager for NASA.

Since the batteries incident, complaints or concerns can be taken up the command chain more quickly, said Arthur Zygielbaum, a former safety advisory board member.

With this communications foundation, Montalbano said, "we can work better and stronger."