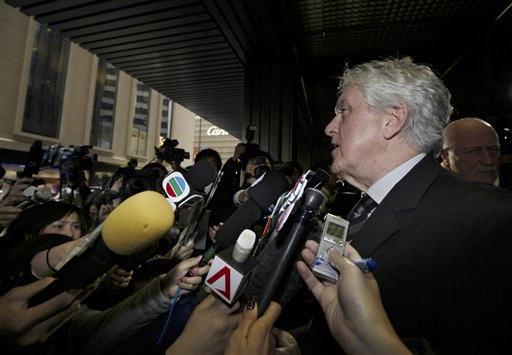 HONG KONG (AP) - Asian casino magnate Stanley Ho has filed a new lawsuit in an attempt to get back a $1.45 billion stake in his Macau gambling empire that he says was seized by some of his family members.

It's yet another twist in a family feud that erupted in late January over who will control the ailing tycoon's interests in the world's biggest gambling market. The 89-year-old Ho, who was hospitalized for seven months after reportedly undergoing brain surgery in August 2009, has 16 surviving children by four women he calls his "wives." The ongoing drama highlights a power struggle among different branches of the family for control of his lucrative gambling business.

The firm's senior partner Gordon Oldham told reporters that it went back to the courts again because no deal had been reached.

"Dr. Ho is very annoyed, very disappointed that in spite of two weeks of discussion between the four families, no resolution has been brought to him," he told reporters.

The firm said in a statement that Pansy and Daisy Ho, two of Ho's daughters by his second wife, have broken their promise to return the stake.

The two are named as defendants in a writ filed with the court, along with two companies controlled by the families of Ho's second and third wives, and Lanceford, a company that held Ho's stake in Hong Kong-listed casino operator Sociedade de Jogos de Macau, or SJM.

The controversy erupted when SJM said nearly all of Ho's shares in Lanceford were being transferred to the companies controlled by the families of the second and third wives.

In videos released earlier by Oldham showing him talking with Ho about the dispute, Ho says he wants to divide his assets equally among his four families.

Oldham reiterated that Ho was misled into signing over the shares.

The firm said the legal action would continue until Ho's shares are returned and other family members may be added "unless their full co-operation is forthcoming."

The high-stakes drama has fascinated Hong Kongers with its glimpse into the private life of one of the city's wealthiest men. Forbes earlier this year estimated his fortune at $3.1 billion.

Macau's economy has boomed since it broke up its gambling monopoly eight years ago. Ho's casinos, which now compete against the likes of Las Vegas Sands Corp. and MGM Resorts, are still the market leaders, accounting for about 30 percent of the city's gambling revenue, which surged to a record $23.5 billion last year.