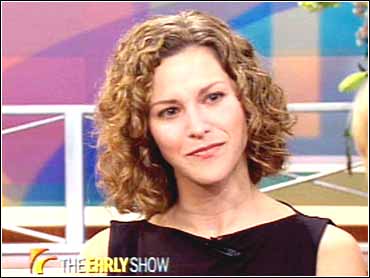 The first two weeks of the million-dollar Survivor adventure series saw two of the older competitors voted off the island. But Wednesday night, it was one of the younger castaways who fell victim to the tribal council, reports Early Show Co-Anchor Jane Clayson.

In the real world, Stacey Stillman, 27, is an attorney from San Francisco.

"I knew before the council I was the one going to go," she said. "I had a personal conflict with some of the people and I felt that I was physically the weakest one on our tribe, and they were concerned about the physical ability of our team for the challenges."

People perceived her as a bit of a whiner.

"Well, I mean, I did get cranky," says Stillman. "We hadn't eaten in nine days. People have seen 45 minutes of each 72-hour period. There were happy times, too."

This week's Early Show Survivor round table discussion, moderated by Anchor Bryant Gumbel, featured comedian Robert Klein, anthropologist Helen Fisher of Rutgers University, and Andy Borowitz, a columnist for The New Yorker magazine and author of a new book, The Trillionaire Next Door.

All were eager to discuss Wednesday night's installment in terms both intellectual and whimsical, although Borowitz was sorry that Rudy the former Navy SEAL was not eliminated instead of Stillman.

"He kept on telling everybody what rope to use. I don't need that. I'm having enough time surviving everything else without Rudy saying, 'Use this rope,'" he said.

But Klein observed, "A guy who knows what rope to use is more handy than a lawyer in almost any situation."

Stillman said the tribal council meetings felt like junior high school. And that's a feeling with some scientific basis, noted anthropologist Fisher: "For millions of years, we were traveling on these grasslands of Africa, and ostracism was death. We have a feeling we want to be included."

For Stillman, it was a little more immediate. "When you're in junior high and they are picking teams, you have a feeling that, you know, you might be the least desirable one," she explained. "And at the council, I knew I was going to go. It was a matter of getting out of that monsoon and getting into a warm bed, pretty much."

She ate three bugs for her team; actually, beetle larvae. What does a grub taste like?

"A writhing egg yolk," reported Stillman, adding that the bugs popped when she bit down on them.

And didn't that count for something?

"I think it did count for something, but I really feel you're only as good as your last few hours on the island," she says. "There is no predictability. People will be amazed to see what happens."

After she left the island, she didn't go home right away.

"I stayed in Malaysia for the full seven weeks," she explained. "I couldn't go home because if I had just showed up on March 24, eerybody would know what happened."

Was it because she was embarrassed that her co-workers would know that she had been eliminated so early?

"Not really," she replied. "I would do the show again if I was the first one kicked off."

Clayson asked Stillman to give one- or two-word descriptions for each of her teammates.

Dirk: "Religious virgin." In fact, Klein, Fisher, and Borowitz agreed that Dirk's ideology will probably be his downfall. Said one: "You must separate church and island."

Kelly: "Resourceful. Crunchy (down to earth)."

Sonja (the first voted off the island from Stillman's tribe): "Sweet."

Although they were not in her tribe, Stillman commented on two other contenders, whom she got to know on the boat en route to the island.

Clayson pointed out that other people, when voted off the island, looked relieved. But Stillman seemed angry.

"Yeah. I don't know why I looked that way," she replied. "I didn't feel as angry as relieved. I did feel very relieved. I got to have a shower. I heard my team had to walk back in the rain through the jungle to their camp. I was happy about that."

What did she like best about the whole experience?

"The sunrises and building a shelter out of bamboo. Like adult Lincoln Logs."

Michael Mann on the prequel/sequel novel "Heat 2"
Thanks for reading CBS NEWS.
Create your free account or log in
for more features.
View CBS News In
CBS News App Open
Chrome Safari Continue
Be the first to know
Get browser notifications for breaking news, live events, and exclusive reporting.