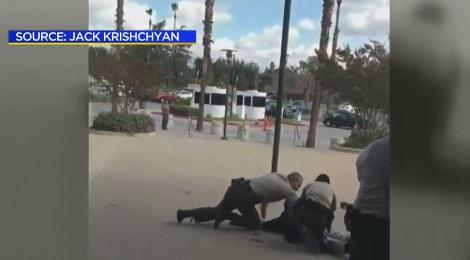 LOS ANGELES -- A sheriff’s deputy has shot and killed a man who stabbed his wife outside a Los Angeles courthouse.

Sheriff’s Officer Benny Carbajal said the man died of his wounds at a hospital after Monday’s shooting.

Attorney Thomas Feher was at the Chatsworth courthouse and saw the shooting. Feher said he saw a woman get out of a car and run toward the courthouse, chased by a man who got out of the car with a knife.

Authorities said the man was shot after he caught up with his wife on the courthouse steps and repeatedly stabbed her, refusing commands to drop the knife.

The courthouse, which handles family disputes such as divorces and custody battles, was closed for the rest of the day and was expected to reopen for business on Tuesday, officials said, CBS Los Angeles reported.