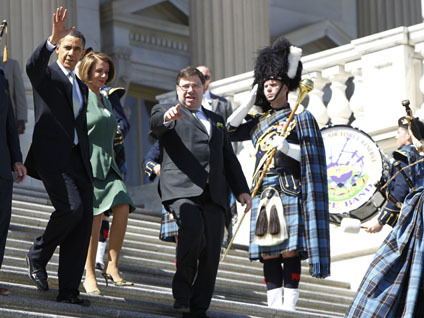 It's genealogy be damned on St. Patrick's Day - even at the White House. Every president claims to have at least a small branch of his family tree than can be traced to Ireland.

Again this year, President Obama trumpeted his bit of Irish blood from his mother's side, though he added a couple of "greats" to his description.

But that's two "greats" more than the far-removed Irish relative he referred to on St. Patrick's Day a year ago as "my great-great-great grandfather."

But by the time of the evening reception he hosted in the East Room, the number of "greats" changed again.

So it was three "greats" last year, five this morning and four this evening.

It suggested the president might have inherited a long-lost Irish relatives gift of blarney, not unknown among American politicians.

Not seeming to realize the twists in his family tree, Mr. Obama went on to say his relative hailed from County Offaly, the same as Irish Prime Minister Brian Cowen.

Checking up on claims of Irish lineage was easier 41 years ago on Richard Nixon's first St. Patrick's Day as president.

"I should point out that in our family, Mrs. Nixon's father was Irish, and on my side my mother was Irish," he said in a ceremony in the Roosevelt Room with William P. Fay, then-Ireland's Ambassador to the U.S.

Year after year, St. Patrick's Day gives American and Irish leaders a chance to hail the longstanding friendship between their two countries and peoples.

"The Emerald Isle has given much to the world, but she has blessed America abundantly with her most precious gift: her children," said President Reagan at a St. Patrick's Day event in 1982.

In 1937, President Franklin Roosevelt broadcast radio greetings on the occasion of St. Patrick's Day from his retreat in Warm Springs, Ga.

"Our own country owes a great debt to them for their contribution to its upbuilding," said FDR in a tribute to the millions of Irish who immigrated to the U.S.

In 1994, then-Irish Prime Minister Albert Reynolds took note of the exodus from his country to the U.S.

"Because of the generations of Irish people who have come to these shores, St. Patricks' Day is perhaps even more honored here than in Ireland," he said at a shamrock ceremony with President Clinton.

Shamrock is always part of the White House observance of March 17th. Year after year, the Irish Taoiseach (Prime Minister) presents the U.S. president with a Waterford crystal bowl of shamrock.

"I want to offer you a gift of a bowl of shamrock, which is genuine shamrock and which I think should be enough for you, your Cabinet, or your family -- anybody else around," said Taoiseach Garret Fitzgerald to Reagan in 1986.

Photo Gallery: Presidents and Shamrocks Over the Last 40 years

A few years earlier, Reagan didn't have any shamrock so he presented the Irish ambassador to the U.S. with a bowl of jellybeans - all green.

At that first St. Patrick's Day for Nixon in 1969, Ambassador Fay offered to put a sprig of shamrock in Nixon's buttonhole.

"Does it work," asked Nixon about the reputed powers of shamrock.

"I hope so," replied the ambassador, enough of a diplomat to respond with a non-committal answer.

"I hope the shamrocks will bring us the luck of the Irish over the next few months," he said to Prime Minister John Bruton in 1995.

But in 1989, it wasn't a gift of shamrock that symbolized Irish-American friendship, even as President George H. W. Bush received a bowlful from Ireland's Deputy Prime Minister Brian Lenihan.

"Once you're had a glass of Guinness with a man in Ireland, as I have with Brian Lenihan, why, you're friends," said Mr. Bush.

Whether with dry Irish stout, or three-leafed clover, St. Patrick's Day has become a White House tradition and reason enough for some music and dance.

Also, check out the fountain in front of the White House today, tinted green for St. Patrick's Day: