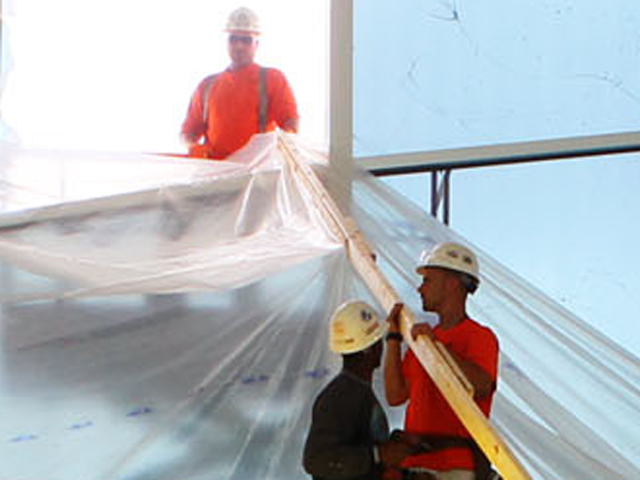 ST. LOUIS - As the St. Louis area continues to recover from tornado damage, the airport is already getting closer to normal.

St. Louis-Lambert International Airport was shut down after it was struck by the tornado that ravaged the St. Louis area Friday. Lambert reopened to arriving flights Saturday night and to departures Sunday.

Officials expect the airport to be running at 85 percent capacity starting Monday, with at least 200 of the approximate 250 scheduled flights departing as scheduled. Complete recovery could take two months.

Airport leaders credit the hard work of re-construction crews and employees in getting the airport repaired so quickly from a tornado that blew out hundreds of windows and caused damage estimated in the millions of dollars.

The most powerful tornado in 44 years ripped through a densely populated suburban area, destroying up to 100 homes, shattering hundreds of panes of glass at the main terminal and blowing a shuttle bus on top of a roof. Yet no one is killed, or even seriously hurt. How?

Early warnings, good timing and common sense all helped prevent a tragedy Friday night. But on Easter Sunday, many of those cleaning up the mess also thanked a higher power.

"I don't know why God decided to spare our lives but I'm thankful for it," Joni Bellinger, children's minister at hard-hit Ferguson Christian Church, said Sunday.

Still, dozens of flights have been canceled, the airport's Concourse C is still closed.

The tornado peaked at an EF-4 level, second-highest on the Enhanced Fujita scale, packing winds of up to 200 mph, National Weather Service meteorologist Wes Browning said. It was the most powerful twister in metropolitan St. Louis since 1967 — and eerily, it followed a path similar to that of the earlier tornado.

Entire subdivisions were destroyed. Cars were tossed about like toys, roofs tossed hundreds of yards and 100-year-old trees sucked out by the roots.

County officials said during a news conference Sunday that 2,700 buildings were damaged. Gov. Jay Nixon said Saturday that up to 100 were uninhabitable. The damage clearly will cost millions of dollars to repair, but a more precise estimate was unavailable Sunday.

The twister destroyed two of the homes John Stein owns on a street in the city of Berkeley, and damaged five others. "Everything you'd find in a war zone except the bodies," Stein said.

Residents in nine communities and unincorporated parts of St. Louis County were still sorting through the rubble Sunday. Ameren Corp. had about 2,000 workers seeking to restore outages that affected 47,000 homes and businesses immediately after the storm.

Yet the common refrain was: It could have been worse. Stuff was destroyed, not lives.

The normally busy airport took a direct hit, with hundreds of panes of glass shattering from the force of the wind. The shuttle bus on the roof was among dozens of vehicles that were damaged.

But the airport had been quiet Friday night. Few planes on the ground were filled with passengers, and those shook but didn't topple. Just a couple of hundred passengers and workers were in Concourse C, which took the brunt of the damage, airport director Rhonda Hamm-Niebruegge said. Five people suffered minor injuries.

Residents praised the weather service for warning them about the tornado more than a half-hour before it hit. Warning sirens blared at the airport, where security officers and other workers herded people to stairwells and bathrooms.

Residents also paid attention to the sirens, and local TV stations switched from network programming to radar of the pending disaster and stern warnings from meteorologists to seek refuge in basements.

"The bottom line is the 34-minute warning and the heeding of that warning by the citizens has saved countless lives," Nixon said.

"The public did what we told them to do," the meteorologist said. "Many came out of the basement without a scratch, and there was nothing left" of their homes.

Bridgeton Mayor Conrad Bowers believes divine intervention also was at work. His own home had moderate damage, but several houses in his neighborhood were obliterated. In many of them, mercifully, no one was home when the twister hit. One family was out for dinner. Another was away playing cards. Another was visiting relatives in Dallas.

At Ferguson Christian Church, nearly three dozen people were gathered on Good Friday to watch the movie "Passion of the Christ" when the sirens began to blare. Pastor Stacy Garner paused the movie and hurried everyone to the basement. They were out of harm's way as the tornado imploded the sanctuary above them.

Like hundreds of residents in surrounding communities, church members have been back trying to salvage what they could. Their Easter Sunday services were at a college campus. They've had a lot of help from neighbors and friends.

"It's not just our church, but people from all over the neighborhood have come to help and clean up the mess and pick up the pieces, and try to figure out what we're going to do from now on," said Bellinger, the children's minister.