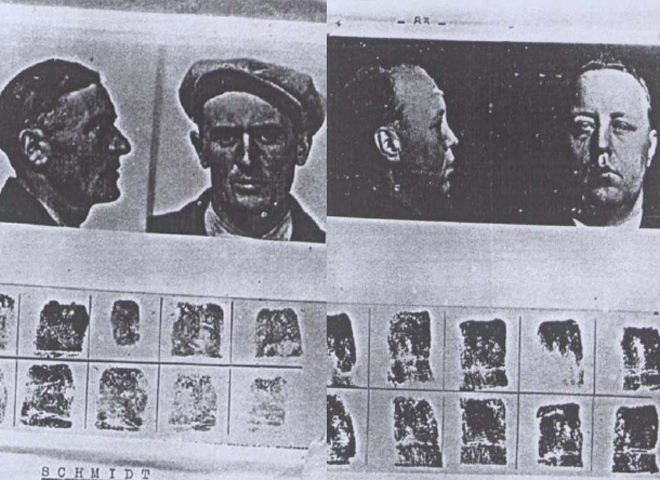 LONDON - The four men wading ashore on a Florida beach wearing nothing but bathing trunks and German army hats looked like an unlikely invading force.

Declassified British intelligence files describe how the men were part of Nazi sabotage teams sent to the U.S. in June 1942 to undermine the American war effort.

They were trained in bomb-making, supplied with explosives and instructed in how to make timers from "easily obtainable commodities such as dried peas, lumps of sugar and razor blades."

Fortunately for the U.S., they were also spectacularly unsuccessful.

"It was not brilliantly planned," said Edward Hampshire, a historian at Britain's National Archives, which released the wartime intelligence documents Monday. "The Germans picked the leader for this very, very poorly. He immediately wanted to give himself up."

A detailed new account of the mission — code-named Pastorius after an early German settler in the U.S. — is provided in a report written in 1943 by MI5 intelligence officer Victor Rothschild. It is one of a trove of previously secret documents which shed light on the Nazis' desire to use sabotage, subterfuge and even poisoned sausages to fight the war.

Pastorius was a mixture of elaborate planning, bad luck and human error.

Eight Germans who had lived in the U.S. were dropped along the Eastern seaboard — four on Long Island, the rest south of Jacksonville, Florida. They were to go ashore, blend in, then begin a campaign of sabotage against factories, railways and canals, as well as launching "small acts of terrorism" including suitcase bombs aimed at Jewish-owned shops.

But the plan started to go wrong almost as soon as the men left their "sabotage camp" in Germany.

They went to Paris, where one of the team got drunk at the hotel bar and "told everyone that he was a secret agent" — something, the MI5 report notes, that may "have contributed to the failure of the undertaking."

The submarine dropping half the group on Long Island ran aground, and MI5 noted that "it was only owing to the laziness or stupidity of the American coast guards that this submarine was not attacked by U.S. forces."

The Germans were stopped by a coast guard, who — to the evident astonishment of the British — did not detain them. He told his superiors, who were slow to contact the FBI.

The others in Florida also made it ashore, despite their attention-grabbing attire of "bathing trunks and army forage caps."

Unfortunately for the team, their leader, George John Dasch, had decided to surrender. The report describes Dasch "ringing up the FBI in Washington from the Mayfair Hotel and saying that he was a saboteur and wished to tell his story to Mr. Hoover" — FBI chief J. Edgar Hoover. The FBI was initially skeptical, but Dasch was soon giving a full confession, and the whole gang was rounded up.

Within months, the saboteurs had been tried and sentenced to death. All were executed except Dasch and another who had also backed out. They were deported to Germany after the war.

For the U.S. it was a lucky escape. In World War I, German saboteurs blew up an arms dump in New York harbor, killing several people and injuring hundreds.

The newly-declassified files give a glimpse of the Nazis' desperate determination to fight a covert campaign against the Allies, even as they knew the war was lost.

One captured French Nazi intelligence agent told his interrogators he had attended a conference in the final weeks of the war to plan a violent campaign that would sow chaos across Western Europe and "eventually lead to a state of civil war in which Fourth Reich would re-emerge."

The campaign was to involve sabotage, assassinations and even chemical weapons.

One file chronicles German attempts to use poison as a postwar weapon. Intelligence from captured Nazi agents indicated there were plans to contaminate alcoholic drinks with methanol, inject sausages with poison and prepare "poisoned Nescafe, sugar, German cigarettes and German chocolate."

Another elaborate plan involved supplying agents with special headache-inducing cigarettes, which could be given to an assassination target. When the person complained of a headache, they would be offered an aspirin — which had been laced with poison.

The files suggest British agents were unsure how much credence to give some of the more fanciful claims, though a memo was drawn up advising that Allied soldiers should not eat German food or smoke German cigarettes "under pain of severe penalties."

"Nowadays, it's easy to regard such schemes as impossibly far-fetched," said Christopher Andrew, the official historian of MI5. "But at the time it was reasonable to believe that after the Allied victory there would remain a dangerous postwar Nazi underground which would continue a secret war."