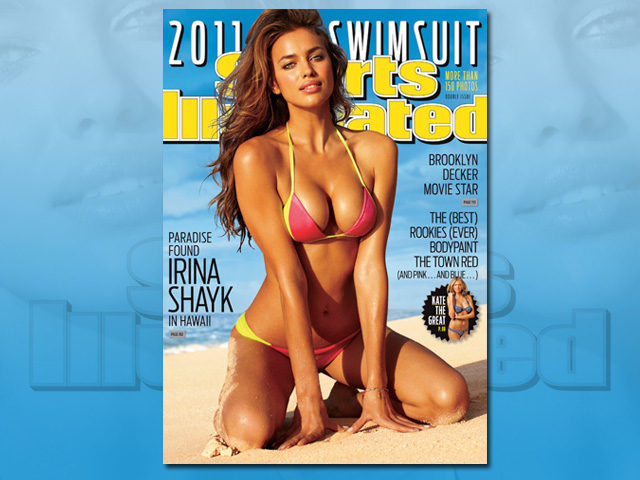 NEW YORK - A sun-kissed Irina Shayk in a tiny pink-and-yellow halter bikini has landed her first cover of the Sports Illustrated Swimsuit issue.

The Russian-born, 25-year-old learned Monday at a taping of David Letterman's show that she won the coveted spot based on a photo shoot months ago in Hawaii. She's been in the wildly popular issue five times before.

"There were 10 models there to do the Top 10 List, and nobody knows until the last minute who the cover will be," Shayk said. "And then I saw it, and I couldn't believe it."

In keeping with tradition, the cover of the special issue is kept secret until the magazine is ready to hit newsstands.

Shayk, the girlfriend of soccer superstar Cristiano Ronaldo, said if she were going to choose one of her photos as her favorite, the cover selection likely would be the one. She liked the push-up bra style of the suit, in a design of pink diamonds on the front of the top with yellow around the neck and sides.

"I never get to see the photos when we take them, but I remembered the swimsuit," Shayk said.

Her other photo shoot for this year's issue was in the Philippines'.

She has a wardrobe of hundreds of bathing suits thanks to her Sports Illustrated work. "When I'm going to vacation on my own — I get the swimsuits after the shoots — I have so many choices!"

Her regimen to get readyfor the skimpy work doesn't really change from her normal beauty routine.

"I do work out five times a week, but I'm never dieting," Shayk said. "I try to be healthy because to be happy and healthy on the inside shows on the outside."

Sports Illustrated is published by Time Inc., a unit of Time Warner Inc.