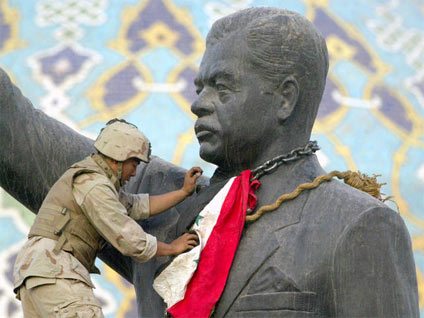 The Grammy award winning band Train is on track this summer, touring all over the country to promote its current CD, "My Private Nation" and a brand new single, "Ordinary," which is found on the "Spider Man 2" soundtrack in stores now.

"It was a privilege and an honor to see the movie and try to write a song inspired by it," band member Pat Monahan tells The Early Show co-anchor Hannah Storm. "It worked out really well. It's a great film and even a better song."

"Ordinary" was one of the songs Monahan, Jimmy Stafford and Scott Underwood performed live for The Early Show Summer Concert series. The band also treated viewers to "Get To Me," and "All American Girl," also from the latest CD, as well as the hit single, "Meet Virginia."

And the women viewers went crazy. It was actually Monahan's mom who inspired him to write the lyrics to his songs about relationships.

And so the band is treating its fans by playing this summer in a lot of smaller venues around the country, something Underwood says was new band member Johnny Colt's idea.

Underwood explains, "It was Johnny's idea, our bass player, who thought it would be cool to do because we were opening for giant bands, Matchbox 20 and all these guys. All of the fans were paying money to see a short Train set. So we decided to play two sets of everything we've written, as much as we could. It's turned out to be great. We have more fun doing that than the big show."

And performing live is something Train truly enjoys, says Stafford, "It's where we came from. We started out in coffee shops and kind of grew up as a band in small clubs and, you know, got popular enough to play bigger places. But, you know, we're definitely a live band and are planning on putting out a live album this fall."

Released in 2003, "My Private Nation" is Train's third album and contains the hit single "Calling All Angels."

The year was full of success but also changes for the group. Rob Hotchkiss left the band in 2003, and earlier this year Train lost Charlie Colin.