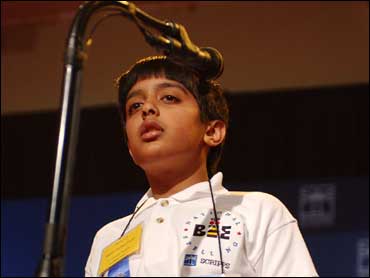 Samir Patel's dream of winning the national spelling title, a goal that dominated the last five years of his life, ended in one quick moment Thursday with the word "clevis."

Spectators in the Grand Hyatt ballroom gasped as the 13-year-old Texan spelled out the word for a type fastening device as "c-l-e-v-i-c-e." The error eliminated him in the fifth round of the Scripps National Spelling Bee.

Patel, considered by many to be this year's favorite, wiped away tears as he talked about it later.

"The first thing I thought was 'c-l-e-v-i-s,' and if I had been slow and cautious like I always am, I would have got it right," he said. "But I just outsmarted myself. It was an easy word. I just made a stupid mistake."

Patel's mother appealed his dismissal, but officials rejected the appeal.

Thirty-three other spellers advanced to the sixth round at the 80th annual bee. The semifinals continued, with the winner set to be crowned Thursday night.

Several other top favorites from previous years remained in contention for the title, which comes with a $35,000 cash prize, plus a $5,000 scholarship, a $2,500 savings bond and a complete set of reference works. The day began with 59 spellers remaining from the record 286 who started the competition Wednesday.

Tia Thomas, 12, of Coarsegold, Calif., bounced on her feet and kept her arms folded behind her back as she dispatched "sagittal" (resembling an arrow), then raised both arms in triumph. Matthew Evans, 12, from Albuquerque, N.M., mastered "azotea" (a terraced roof). Both are in the bee for the fourth time.

The afternoon semifinals were televised for the 14th year by ESPN, with the finals to air on ABC in prime time for the second consecutive year.

For the third time in two days, the Kiwi accent of the representative from New Zealand threw the judges for a loop. After listening to a replay, officials still weren't sure if 13-year-old Kate Weir of Christchurch had tried to spell "jardiniere" (an ornamental plant stand) with a "g" or a "j." They finally asked her to give another word starting with the letter. When she said "giraffe," the bell sounded and she was out.

The words got tougher as the rounds progressed, and several spellers used humor when they reached the breaking point. Josiah Wright of Fleetwood, N.C., asked "Is that English?" when he heard the scientific term "ptilopod."

"They tell me it is," replied pronouncer Jacques Bailly.

Josiah spelled the word as "tylopod" and was eliminated.

Others stayed alive with a good guess.

"Wow, this is a new one," said Caroline Rouse of St. Louis upon hearing "beccafico" (a kind of bird).

Claire Zhang, 14, of Jupiter, Fla., knew something was amiss when she heard the telltale bell signal that she had misspelled "burelage" (intricate lines found on security paper). Claire had been escorted to the edge off the stage on the way to the comfort room before the judges ordered an audio replay of her spelling and, after a delay of several minutes, discovered that she had indeed spelled it flawlessly.

"Claire, you may resume your place," head judge Mary Brooks announced as the audience cheered.