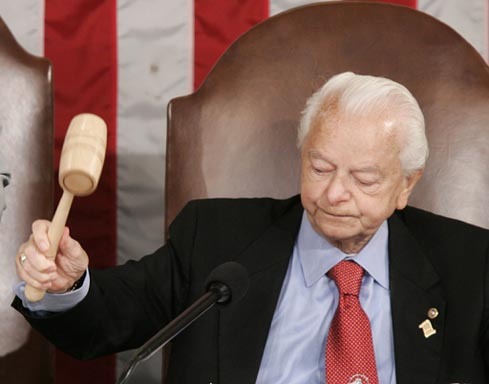 Now West Virginia Secretary of State Natalie Tennant has weighed in to say that her office interprets the law to mean that the special election will be held in November 2012 - the same day as the general election contest coming at what would have been the end of Byrd's term.

Tennant cites state code mandating that because the filing period for the 2010 election has passed the election will have to wait, adding there is precedent for such an interpretation. That creates a unique situation in which the special election and the regular election for the following term will be held at the same time, with the winner of the special election merely serving the short period between the election and the new term.

"Section 3-10-3 states that for terms with more than two years and six months remaining, such as this one with Senator Byrd, the Governor will appoint a replacement who serves the unexpired term until a successor has been elected," Tennant said in a statement.

"That means the election for the unexpired term would be the next election cycle which would take place in 2012," added the secretary of state.

Manchin is believed to be interested in running for the Senate himself and quietly established a federal political action committee in early June to start raising seed money for a Senate bid, as Ambinder notes. The governor told the Associated Press he will not appoint himself to fill Byrd's vacancy.