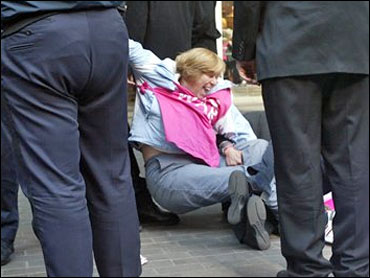 Bill Burke had a vision about leading Michigan State's past arch-rival Michigan. Still, he didn't see anything like this happening.

"One of my keys is to visualize playing a good game," Burke said. "I'm not sure I was thinking about 400 yards, though."

The win left Michigan State, which began the season unranked, 6-0 overall and 3-0 in the conference. The Wolverines, hoping for a second national title in three years, slipped to 5-1, 2-1.

Burke completed 21 of 36 passes and became the first player to pass for 400 yards for Michigan State, breaking the mark of 369 by Ed Smith against Indiana in 1978.

"I've had games where I felt better, but I just wanted to keep plugging away," Burke said. "I just didn't want to do anything that could lose the game."

Burress, who broke the school mark of 252 receiving yards by Andre Rison in the 1989 Gator Bowl against Georgia, wasn't about to let that happen.

"My motto is `Stay Dangerous'. I've got a new attitude," Burress said. "If I drop a pass, I just tell myself that the defense has to respect me, because they know I'll catch the next one."

The battle in the trenches, while not as glamorous, was just as important to the Spartans as the heroics of Burke and Burress.

Michigan State, which had not allowed a rushing touchdown, went into the game allowing an average of just 42.8 yards per game on the ground. The Wolverines learned why, finishing with just six yards on 21 rushing attempts.

Michigan got school-record 396 of its 402 yards through the air, most of it on the arm of Tom Brady during a furious fourth-quarter comeback that came up short. The Spartans had 90 yards rushing.

"We just didnt put together four quarters of football," Brady said. "We came on at the end, but to beat a team like this, you need to play 60 minutes."

Brady, a senior who has battled highly touted sophomore Drew Henson for the quarterback job all season, played the first and fourth quarters.

Henson, who completed 6-of-12 for 111 yards, got the Wolverines their first touchdown on an 81-yard pass to Marcus Knight in the second quarter. But he wasn't able to move the offense in the third quarter and Brady brought the Wolverines back from a 27-10 deficit by directing three scoring drives in the final quarter.

The Spartans had dominated both sides of the ball until Brady got things going in the final quarter. The Wolverines rolled up 208 yards during their fourth quarter blitz.

"They beat us up front and that was really where the game was won," Michigan coach Lloyd Carr said. "They beat us on both sides of the ball and just did a tremendous job."

Michigan State, behind the passing of Burke and big-play receptions by Burress, dominated the first two quarters, yet led just 13-10 at halftime.

Freshman T.J. Duckett scored on a 1-yard run and Paul Edinger kicked field goals of 39 and 43 yards in the first half for the Spartans. The Wolverines got a school-record 56-yard field goal by Hayden Epstein and Henson's bomb to Knight.

Michigan State kept the pressure on in the second half. Edinger missed a 44-yard attempt on the Spartans first possession, but with Burke and Burress hooking up for 17 yards, Michigan State drove 49-yards in seven plays for a touchdown and a 20-10 lead on a 19-yard TD toss from Burke to Gari Scott.

Moments later, Henson under a tremendous rush was picked off by Aric Morris who returned it 17 yards to the Michigan 18. Three plays later, Burke found Burress wide open in the end zone for a 15-yard touchdown and a 27-10 lead with 3:02 left in the third quarter.

It didn't slow down Burke or the Spartans, however. Burke hit passes of 21 and 35 yards as Michigan State went 76 yards in six plays on its next possession, taking a 34-17 lead on a 14-yard scoring run by Dawan Moss.

Brady, continuing the comeback quest, completed 8-of-8 for 75 yards on Michigan's next possession, hitting David Terrell with a 19-yard TD toss to make it 34-24 with 8:11 left.

Brady, hitting 9-of-11 for 86 yards, took the Wolverines 96 yards on their next possession, hooking up with Aaron Shea for an 8-yard touchdown, closing the gap to three points with 2:47 remaining.

It was just the 12th time Michigan and Michigan State met when both wer ranked by The Associated Press. Michigan had won the last five, but the Spartans now lead the series 6-5-1 in those 12 games