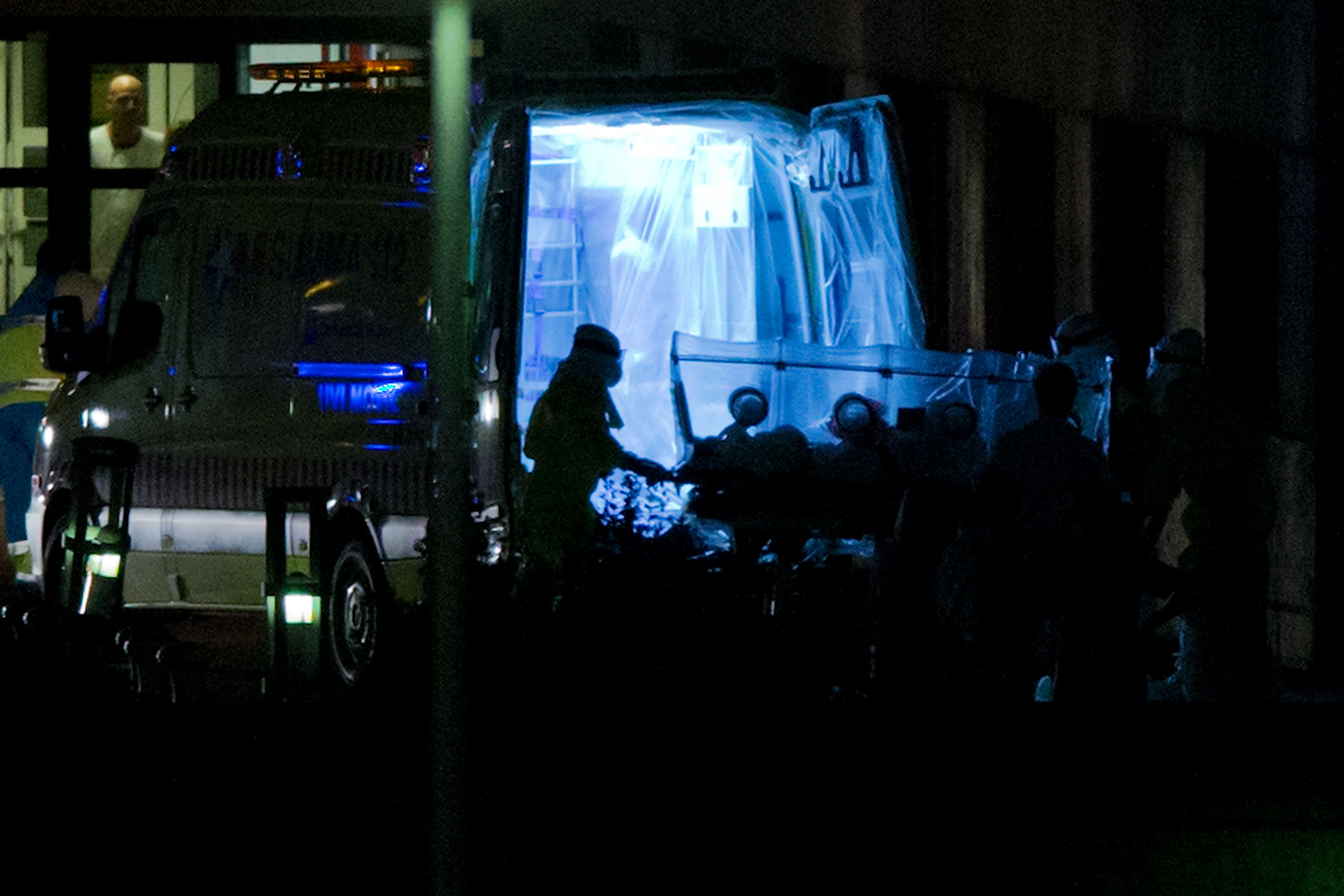 MADRID -- Three more people were placed under quarantine for Ebola at a Madrid hospital where a Spanish nursing assistant became infected, authorities said Tuesday. More than 50 other possible contacts were being monitored.

The nursing assistant, who had cared for a Spanish priest who died of Ebola, was the first case of Ebola being transmitted outside of West Africa, where a months-long outbreak has killed at least 3,500 people and infected at least twice as many. The woman was initially reported to be a nurse.

Her case highlighted the dangers that health care workers face caring for Ebola patients - officials said she had changed a diaper for the priest and collected material from his room after he died. Dead Ebola victims are highly infectious and in West Africa their bodies are collected by workers in hazmat outfits.

News of the quarantines hit Spain's stock market Tuesday. Spain is one of Europe's biggest tourist destinations and stocks in tourism-related companies such as airlines and hotel chains fell on the Madrid stock exchange as investors feared the consequences of the Ebola case.

Shares in International Airlines Group, formed in early 2011 by the merger of British Airways and Iberia, dropped more than 6 percent, while those of NH Hotel Group and Melia Hotels were down 4 percent. The Ibex 35 stock market index was 1.7 percent lower.

The nursing assistant's husband has shown no signs of having the disease but was hospitalized as a precaution, said Dr. Francisco Arnalich, head of internal medicine at the Carlos III hospital where all were under quarantine.

In addition, a nurse who also treated the priest who died Sept. 25 was put into quarantine after experiencing diarrhea but she did not have a fever, the most common initial symptom for Ebola. And a Nigerian man who recently arrived in Spain was also under quarantine but tested negative for Ebola in his first test.

Public Health Director Mercedes Vinuesa told Parliament that authorities were drawing up a list of other people who may have had contact with the nurse. She has not been publicly identified but has no children.

By Tuesday, authorities had gotten in touch with 22 people - including relatives and personnel at the hospital in the Madrid suburb of Alcorcon where she went early Monday with a fever. They were also monitoring about 30 other members of the health care team that treated Manuel Garcia Viejo, the priest who returned from Sierra Leone and died of the disease.

The Health Ministry's chief coordinator for health emergencies, Fernando Simon, told Cadena SER radio the nursing assistant was in stable condition and her life not in immediate danger. Health officials said she had no symptoms besides fever. Simon said the nursing assistant's husband was "OK and relatively calm."

He also rejected criticism that Spain authorities were slow to react to the case.

About 20 health care workers at the hospital protested Tuesday amid claims by nursing union officials that Spain was not giving them enough training and the most modern Ebola protection equipment.

The nursing assistant with Ebola also assisted treating 75-year-old Spanish priest Miguel Pajares, who got Ebola in Liberia, flew back to Spain, was treated with the experimental Ebola medicine ZMapp but still died. The other patient, Garcia Viejo, who was in charge of the San Juan del Dios hospital in Lunsar, Sierra Leone, was not given ZMapp because worldwide supplies ran out.

The virus that causes Ebola spreads through direct contact with the bodily fluids of an infected person.

According to Reuters, an official at the Carlos III hospital said the nursing assistant was being given antibodies via a drip from a previous Ebola patient in the country.

The nursing assistant's illness illustrates that health care workers are at risk even in more sophisticated medical centers of Europe and the United States, said Dr. William Schaffner, an infectious disease expert at Vanderbilt University.

"At greatest risk in all Ebola outbreaks are health care workers," he said.

More than 370 health care workers in the hardest-hit countries of Liberia, Guinea and Sierra Leone have died.

In the U.S., video journalist Ashoka Mukpo, who became infected while working in Liberia, arrived at the Nebraska Medical Center in Omaha. It's not clear how he was infected his father, Dr. Mitchell Levy said, adding that on Monday, his symptoms of fever and nausea still appeared mild.

Mukpo is the fifth American sick with Ebola brought back from West Africa for medical care. The others were aid workers - three have recovered and one remains hospitalized.

There are no approved drugs for Ebola, so doctors have tried experimental treatments in some cases.

A critically ill Liberian man hospitalized in Dallas is getting an experimental treatment, Texas Health Presbyterian Hospital said. Thomas Eric Duncan is the first person to be diagnosed with Ebola in the U.S.; he was admitted to the hospital Sept. 28.

The hospital said Duncan was receiving an experimental medication called brincidofovir, which was developed to treat other types of viruses. Laboratory tests suggested it may also work against Ebola.

But Federal health officials say a travel ban could make the desperate situation worse in those countries. White House spokesman Josh Earnest said it was not currently under consideration.

President Barack Obama said the U.S. will be "working on protocols to do additional passenger screening both at the source and here in the United States." He did not outline any details.