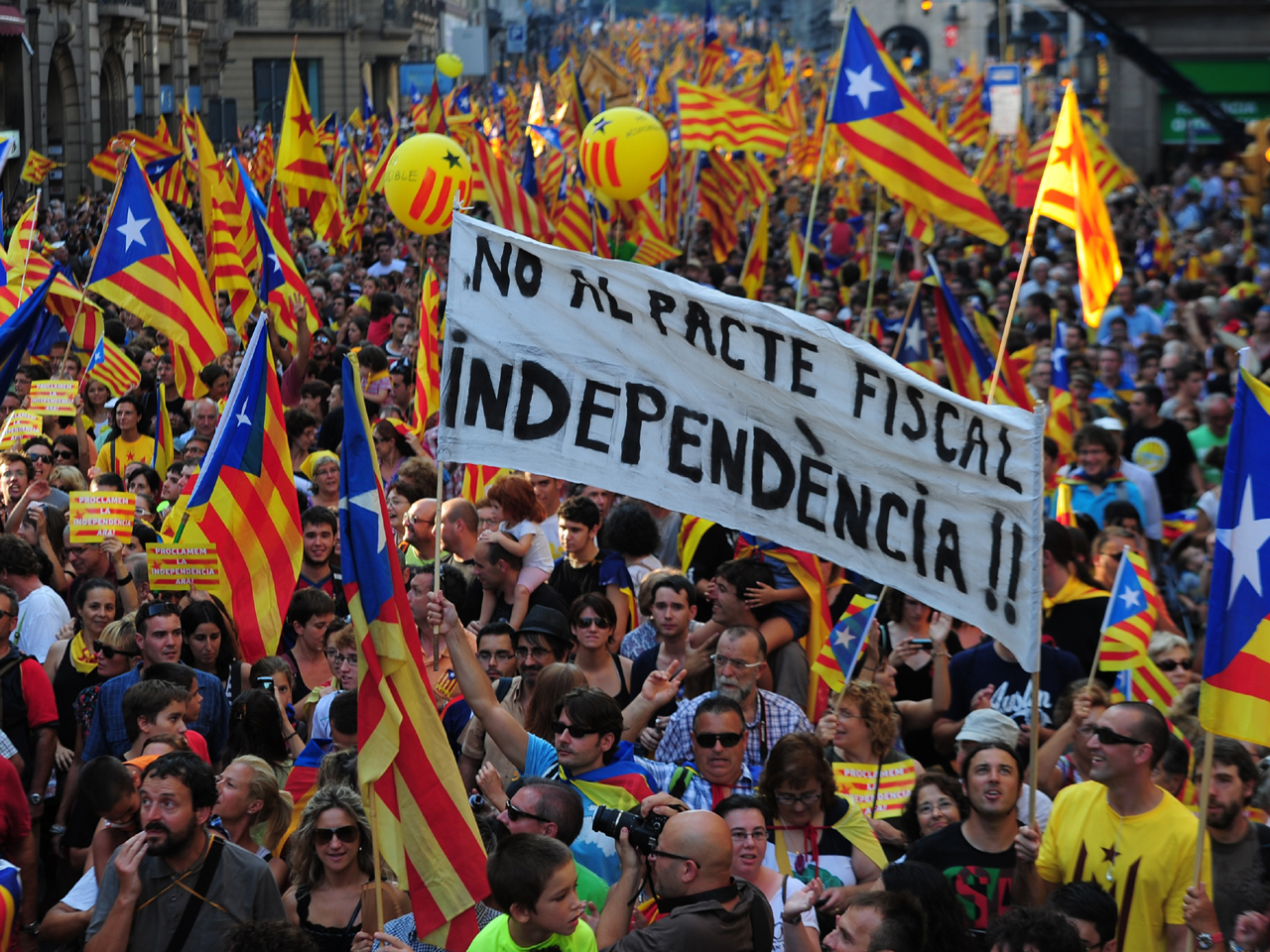 (MoneyWatch) Spain is denying it will ask for a bailout as it prepares another round of budget cuts to address its worsening economic situation. Further declines in real estate prices are increasing the amount Madrid may have to borrow to rescue its banks.

This comes amid increasing pressure to help the nation's floundering regional governments and avoid civil disorders. Earlier this week an estimated 1.5 million people joined in a protest demanding independence for the nation's Catalan region.

Representatives of both Spain and the European Central Bank have denied reports of negotiations around a $300 billion bailout, which appeared Friday in the Dutch financial daily Het Financieele Dagblad. That story came out a day after Bloomberg reported the French government was pressing Madrid to seek a bailout. An official with Spain's Economy Ministry refuted this report as well.

On Friday, Economy Minister Luis de Guindos told a gathering of eurozone finance ministers that the government is drawing up another set of structural economic reforms with firm deadlines. He said the plan will be presented to the European Union by the end of the month. Spain's 2013 budget and a long-delayed detailed audit of its banks' capital needs are both due on Sept. 28.

ECB plan is a more powerful patch, not a solution
What do Americans think of the rich?Census report doesn't capture extent of poverty
Poverty remains level, but incomes fall

"We will adopt a new set of reforms to boost growth... It will be in line with the recommendations of the European Commission," de Guindos said after the meeting in Cyprus.

Market pressure on Spain to seek a bailout has eased considerably since ECB President Mario Draghi announced he had unlimited funds ready to buy the bonds of any nation seeking a bailout. However, the nation's increasing economic problems continue to add to its debt burden and spur dissent among its people.

A report out this week showed Spanish home prices fell a record amount in the second quarter of the year. This further decline in real estate is adding to the amount that will be needed to bailout the nation's many bankrupt financial institutions.

From May to June the average price of houses and apartments declined 14.4 percent from a year earlier, according to the National Statistics Institute in Madrid. That is the biggest drop since the measurement began in 2008. Prices were down 3.3 percent compared to the previous quarter.

Since their 2007 peak, home prices have fallen 32.4 percent, according to Tasaciones Inmobiliarias, Spain's largest home appraiser. The number of Spanish homes sold declined in July for a 17th month, dropping 2.5 percent from a year earlier, according to the statistics agency. Also, mortgage lending fell 20.4 percent in June from the year-ago period.

Spain, which is in its second recession in three years, expects its economy to contract 1.7 percent this year. The country's 25 percent unemployment rate is Europe's highest.

Earlier this week approximately 1.5 million people took to the streets of Barcelona, Spain's second largest city, to demand independence for the region of Catalonia. Polls published this week show support for independence running at 46.4 percent, twice as high as in 2008, when the financial crisis began. The nation's economic problems have exacerbated long-standing resentments among Catalans about what they see as unfairly high contribution to the central government.