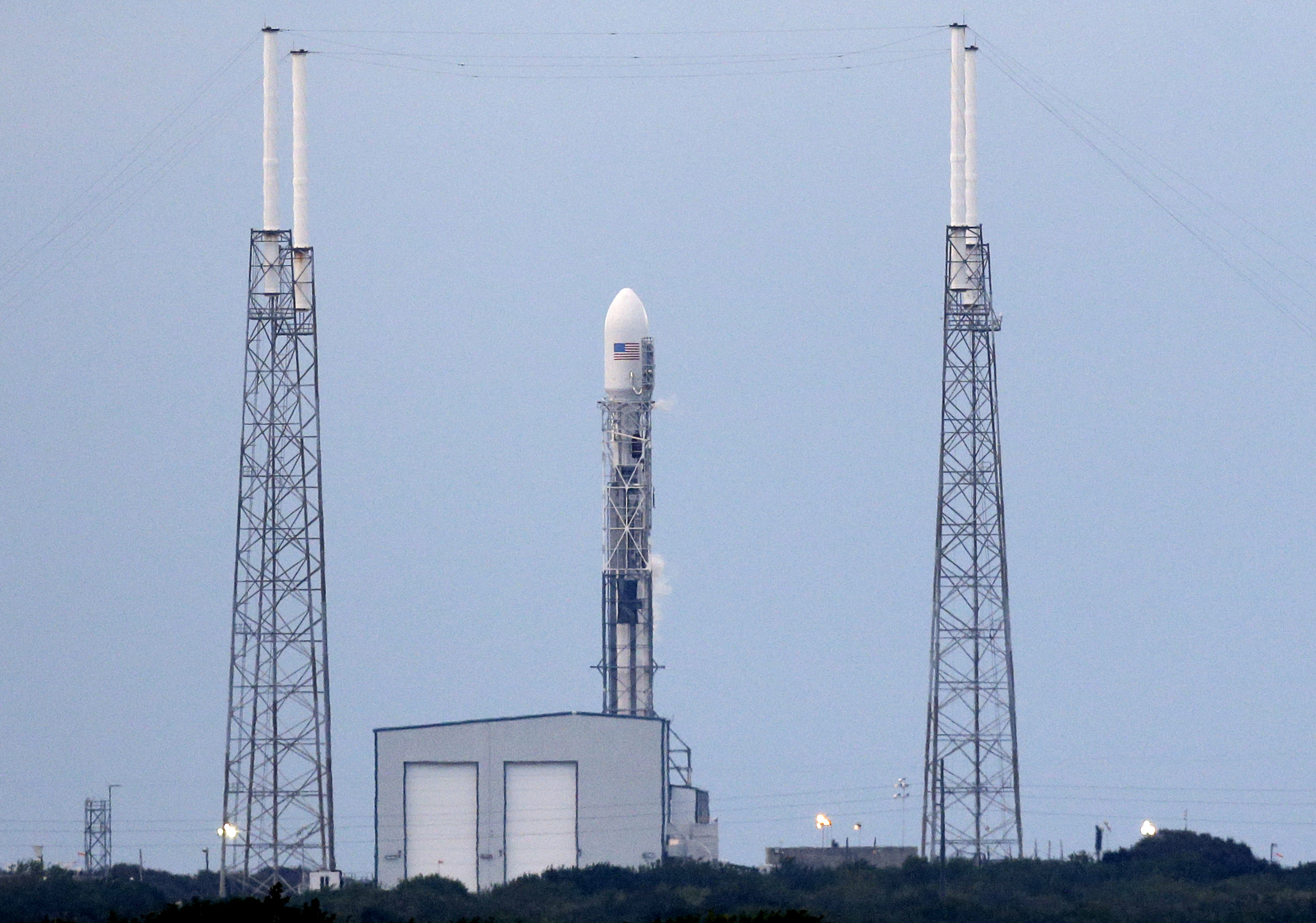 Launch of a SpaceX Falcon 9 rocket carrying a space weather satellite inspired 17 years ago by Al Gore was grounded again Tuesday, this time by high upper level winds. SpaceX engineers were told to recycle the countdown for a third attempt Wednesday at 6:03 p.m. EST (GMT-5).

Even without a launch it was a busy day for the California rocket company. Earlier Tuesday, astronaut Samantha Cristoforetti, operating the International Space Station's robot arm, released a SpaceX Dragon cargo ship to kick off an autonomous five-and-a-half-hour descent to Earth.

"This is the end of a very, very successful Dragon mission," Cristoforetti radioed flight controllers as the cargo ship moved away. "We'd really like to thank you ... for working hard on this and, of course, the (SpaceX) folks in Hawthorne (California).... We're obviously looking forward to a successful splashdown and recovery."

The Dragon's braking rockets fired on time at 6:49 p.m., dropping the craft out of orbit for an hour-long descent to a parachute-assisted splashdown 259 miles southwest of Long Beach, Calif., around 7:44 p.m. SpaceX recovery crews stationed near the Pacific Ocean landing target were standing by to haul the capsule aboard for the trip back to port.

The suits that will be used by Wilmore and Virts passed their pre-EVA tests with flying colors, but during routine tests of another spacesuit in December, a fan pump separator, used in the suit's water cooling system, failed to start. The unit was replaced with a spare, but it, too, malfunctioned during a test last month.

Both units will be returned to the spacesuit vendor, United Technologies Aerospace Systems, for detailed inspections. Depending on the results, Wilmore and Virts will either be cleared to proceed with their planned spacewalks or the work will be deferred pending additional troubleshooting.

As it now stands, NASA plans three spacewalks -- Feb. 20, 24 and March 1 -- to install cabling and other equipment needed to prepare the lab for new docking mechanisms that will be used by commercial crew ferry craft being built by Boeing and SpaceX.

SpaceX engineers at the Cape Canaveral Air Force Station in Florida had hoped to launch the Deep Space Climate Observatory satellite, or DSCOVR, atop the Falcon 9 rocket at 6:05 p.m., just an hour and a half before the Dragon's splashdown.

There were no technical problems at launch complex 40 and the local weather was "go" for flight. But weather balloons indicated severe wind shear between 25,000 and 30,000 feet, exceeding the Falcon 9's structural and steering limits.

In a tweet a few hours before launch, SpaceX founder and chief designer Elon Musk said such "extreme wind shear ... feels like a sledgehammer when supersonic in the vertical. Hoping it changes."

But a final weather balloon launched in the last half hour of the countdown showed the winds had not abated enough to permit a launching and the countdown was called off for the day.

The DSCOVR satellite was proposed 17 years ago by then Vice President Al Gore to provide streaming, high-resolution Earth views to the internet. But the Bush administration canceled the project in 2001 and the spacecraft was put into storage.

NOAA took it over in 2008, splitting the cost with NASA and the Air Force, and gave the spacecraft a new mission: to provide early warning of potentially dangerous solar storms.

SpaceX had hoped to launch the rocket Sunday evening, but problems with an Air Force tracking radar stopped the countdown just two-and-a-half minutes before liftoff. A second launch try Monday was ruled out because of predicted -- and realized -- low clouds and rain, setting up a second attempt to get the $340 million mission underway Tuesday.

But it was not to be. Instead, SpaceX, NASA, NOAA and the Air Force will set their collective sights on Wednesday when forecasters are predicting a 90 percent chance of good weather. If the mission still can't get off the ground for some reason, the flight will be delayed to Feb. 20.

Whenever it takes off, the Falcon 9's first stage will attempt a computer-controlled re-entry and landing on a so-called drone ship stationed well off the coast of Jacksonville, the latest in a series of tests the company is conducting to perfect the techniques needed to recover spent stages for refurbishment and re-launch.

A similar attempt during the Dragon cargo ship's launch last month was only partially successful. The rocket made it back to the drone ship but its stabilization system ran out of hydraulic fluid in the final stages of the descent, and the rocket hit the landing deck at an angle and exploded.

This time around, more than enough hydraulic fluid was on board but the demands of the DSCOVR trajectory meant the first stage would only have enough left-over propellant to carry out two braking "burns" instead of three. That was expected to result in a much faster, much more stressful re-entry.

But the primary goal of the mission is to launch DSCOVR, the first deep space payload assigned to a Falcon 9 rocket.

While monitoring space weather is now the primary goal of the mission, the 1,256-pound solar-powered satellite will still provide dramatic whole Earth views from its orbital perch nearly 1 million miles toward the sun.

It also will measure the amount of solar energy reaching the planet, and the amount reflected back out into space, with unprecedented precision.

"What this satellite will make it possible to do is to measure not only the energy coming into the Earth from the sun, which we can measure today, but we can also now for the first time measure the energy reflected back into space from the Earth," Gore told reporters at the launch site Sunday.

"You subtract that second number from the first number, that's the problem we've got to solve. Because the amount of energy that's being trapped in the atmosphere, it is growing. That's why the ice is melting and the sea level is rising in Miami Beach and a lot of other places."

But DSCOVR will not stream Earth views to the internet as initially envisioned by Gore. Instead, it will take high-resolution multi-wavelength pictures every few hours and downlink them to Earth. The images typically will be posted the following day.