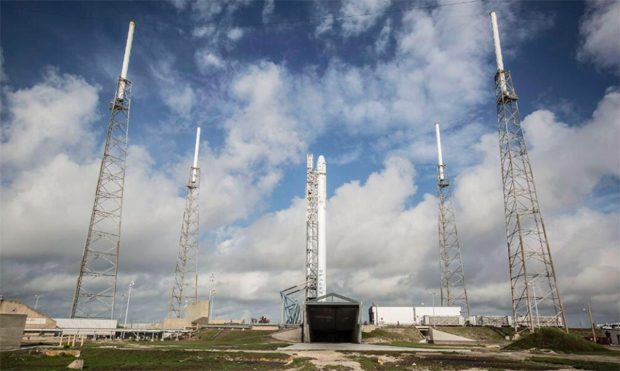 SpaceX is readying a Falcon 9 rocket and a Dragon cargo ship for launch Sunday to deliver more than 4,000 pounds of equipment, supplies and science gear to the International Space Station, including the first of two new docking adapters needed to capture American crew capsules being built by Boeing and SpaceX.

The science instruments and supplies cover a wide range of disciplines, including work to help figure out what is causing vision problems in three quarters of the astronauts who make long-duration space flights. A customized camera will photograph shooting stars from above to determine their chemical composition and the station crew will attempt to grow cabbage that can be added to the lab's menu.

Other experiments include studying how genes are turned on and off in weightlessness, how microorganisms grow and move through the station and tests to better understand how implantable drug delivery systems work at the molecular level to improve performance on Earth. Also on board: more than two dozen student experiments.

"There are about 35 different experiments that are going up or down on SpaceX 7, and those support the over 250 active investigations we have going on on ISS right now," said Julie Robinson, space station program scientist.

While getting the Dragon to the space station is the primary objective of the mission, SpaceX plans to make a third attempt to land the rocket's first stage on off-shore remotely-operated barge, or drone ship. Recovering booster stages and flying them again is a key element in founder Elon Musk's drive to lower launch costs.

During the first attempt in January, the descending rocket stage ran out of hydraulic fluid and crashed into the "Just Read the Instructions" drone ship. A second try in April almost worked, but a valve problem caused a loss of control seconds before touchdown and the booster tipped over and exploded.

This time around, Hans Koenigsmann, SpaceX vice president of mission assurance, said he was hopeful, but cautioned that success was far from certain.

"It's hard to say what the odds are, if it's better than the last one or not," he told reporters Friday. "There is always uncertainty until we basically solve this problem end to end. But I feel a little bit better (about the outcome)."

Liftoff from the Cape Canaveral Air Force Station is targeted for 10:21 a.m. EDT, roughly the moment Earth's rotation carries launch complex 40 into the plane of the space station's orbit. Forecasters predicted a 90 percent chance of acceptable weather, dropping to 70 percent "go" should launch be delayed to Monday.

The Falcon 9's first stage is expected to shut down a little less than three minutes after launch. At that point, it will begin fly-back maneuvers, flipping around and carrying out the first of three rocket firings to slow down and line up on a trajectory toward the drone ship.

"The first stage will flip around pretty quickly and then perform a boost-back burn," Koenigsmann said. "It then will coast for a while and then perform an entry burn. The entry burn basically lowers the dynamic pressure during the atmospheric entry. And then at the very end, it will perform a landing burn on a single engine and hopefully, gently, land on the drone ship."

If successful, the booster will be hauled back to port in Jacksonville and transported to SpaceX's McGregor, Texas, test facility for "a really thorough inspection."

"Given the way we re-enter and given the heat shield design and everything, we think it's going to be in very good shape (if the landing is successful), and we can fly it pretty quickly after that," Koenigsmann said. "The vehicle is designed to fly multiple times to be reusable. And we're going to test that."

While the first stage is attempting to land, the Falcon 9 second stage, powered by a single Merlin 1D engine, will continue the push to orbit, releasing the Dragon capsule about nine-and-a-half minutes after liftoff. The capsule's solar arrays should deploy a few moments later, setting the stage for a carefully orchestrated series of thruster firings to catch up with the space station.

If all goes well, the Dragon, approaching from below, will pull to within about 30 feet of the lab complex around 6:42 a.m. Tuesday. At that point, astronaut Scott Kelly, operating the station's robot arm, will latch onto a grapple fixture so the cargo ship can be pulled in for berthing at the Earth-facing port of the forward Harmony module.

The capsule is loaded with 4,116 pounds of cargo, including 1,490 pounds of crew clothing, food and "care packages," 1,016 pounds of vehicle hardware, 1,166 pounds of science gear, 366 pounds of spacewalk equipment, 77 pounds of computer gear and the 1,160-pound docking adapter mounted in the capsule's unpressurized trunk section.

Two International Docking adapters, or IDAs, will be attached to ports on the front and top of the station for dockings by Boeing's CST-100 ferry craft and piloted versions of SpaceX's Dragon capsule. During spacewalks earlier this year, the station crew installed wiring and antennas needed to tie the IDAs into the lab's power and data systems.

The IDA going up Sunday aboard the Dragon is expected to be installed no earlier than August or September. The second IDA, which will go up aboard the SpaceX 9 mission in December, will be installed early next year. When the work is finished, the U.S. segment of the station will boast two docking ports for U.S. crew ferry craft and two for unpiloted cargo ships.

In addition to the IDA, "there are a number of important spares that are coming up on this flight, as well as a few extra provisions -- food, some crew clothing -- that we're replacing that were on the (Russian) Progress that was recently lost," said Mike Suffredini, the space station program manager.

"But even with that loss we have very good logistics on board for the entire crew," he added. "We're good to the October timeframe if no other (cargo) vehicles show up. And with SpaceX 7, we get ourselves to pretty much the end of the year on most of the supplies. So we're in very good shape in that respect."

The Russians plan to launch another Progress supply craft, the first since the April 28 failure, on July 3.

The vision research aboard the station is taking on a more significant role as NASA studies the long-term effects of weightlessness and the radiation astronauts experience during long-duration spaceflight. Kelly and cosmonaut Mikhail Kornienko plan to spend nearly a year aboard the lab complex. Eventual flights to Mars would take much longer.

"Up to three quarters of American astronauts are coming back (from long-duration station flights) with changes in ocular structure and vision, all with varying severity," said Michael Stenger, a principal investigator with the Fluid Shifts experiment. "It's very unclear what is causing this and why some astronauts have more severe vision issues than others."

In the absence of gravity, fluids tend to shift toward the upper body. Researchers suspect increased intracranial pressure causes changes in the shape of the eye and stress on the optic nerve.

"The hypothesis is that the headward fluid shift experienced in spaceflight is leading to an increase in inner cranial pressure," Stenger said. "Intra cranial pressure, or ICP, has never been measured in spaceflight, so at this point it's just a hypothesis. The purpose of this experiment is to try to gain more information as to why these changes are occurring in astronauts' eyes."

He said many astronauts recover normal, or near-normal vision after return to Earth but a handful of others experience long-term problems.

The goal of the Fluid Shifts experiment is "to determine if there's a relationship between unique individual response to this headward fluid shift and subsequent changes in ocular structure of swelling of the eye, changing of the shape of the back of the eye, which is ultimately leading to changes in visual acuity," Stenger said.

The problem may involve how blood drains from the cranium. On Earth, blood in the heads of people sitting up tends to drain through vessels at the back of the cranium. When resting on one's back, the jugular vein takes over.

"The ability of an astronaut to drain their brain may somehow impact the amount of pressure they're experiencing in the head, which may be impacting this visual syndrome," Stenger said.

After the Dragon is berthed, the astronaut will spend the next several weeks unloading its cargo and repacking it with 1,366 pounds of no-longer needed equipment, research samples and miscellaneous cargo. Assuming no problems develop, the Dragon will be detached from the station Aug. 5 for a fiery return to Earth.

Should parents snoop on their kids online?
William Harwood