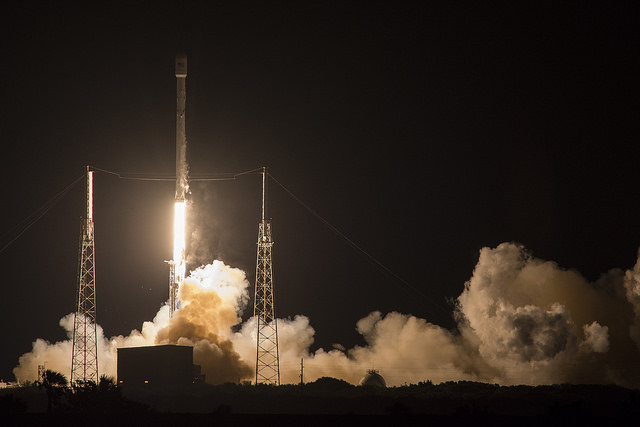 A SpaceX Falcon 9 rocket roared to life and shot away from Cape Canaveral early Friday, lighting up the night sky with a streak of fiery exhaust as it boosted a powerful Japanese communications satellite into space.

Chalking up a double success, the JCSAT-14 relay station was delivered to the intended preliminary orbit -- the primary goal of the mission -- and the rocket's first stage carried out a controlled landing on an offshore barge, or "droneship," the second such successful landing in a row.

SpaceX managers said before launch they were not optimistic given the satellite's trajectory and the high speed of the booster at stage separation. But the stage made it back to the droneship "Of Course I Still Love You" and settled to a picture-perfect powered landing.

SpaceX pulled off its first successful offshore landing April 8 after sending a Dragon cargo ship on its way to the International Space Station. The first and, so far, only successful return to a Cape Canaveral landing occurred last December. The company's record now stands at three successful landings in seven attempts.

Recovering, refurbishing and relaunching rocket stages is a key element in Musk's drive to dramatically lower launch costs. SpaceX hopes to relaunch the stage recovered in April sometime this summer.

Friday's mission began at 1:21 a.m. EDT (GMT-4) when the Falcon 9's nine Merlin 1D first-stage engines ignited with a rush of flame, quickly pushing the 229-foot-tall rocket away from pad 40 at the Cape Canaveral Air Force Station. Liftoff was delayed 24 hours by stormy weather earlier in the week, but it was clear sailing Friday.

With Mars and Saturn rising in the East, the slender booster put on a dramatic show as it consumed its load of first stage propellants, becoming ever lighter and rapidly accelerating, visible for miles around in a cloudless, new-moon sky as a deep, crackling roar washed over Florida's Space Coast.

The first stage engines shut down two minutes and 38 seconds after liftoff, the rocket's two stages separated a few seconds later and the flight continued under the power of a single Merlin 1D engine driving the upper stage.

The first stage, meanwhile, arced back to Earth and fired three of its engines to reduce speed for a tail-first entry into the discernible atmosphere. The engines then restarted as planned as the rocket plunged toward SpaceX's droneship several hundred miles east of Cape Canaveral.

Quickly slowing down, the booster's four landing legs deployed and it settled to a smooth touchdown, prompting a rousing cheer from SpaceX flight controllers watching the descent from a control room at the company's Hawthorne, Calif., plant.

Before launch, Musk put the odds of success at "maybe even" due to the high-speed entry required after a high-performance comsat launch.

"Rocket reentry is a lot faster and hotter than last time, so odds of making it are maybe even, but we should learn a lot either way," he said.

Dramatic as it was, the recovery of the first stage was a strictly secondary objective. The primary goal was to deliver the JCSAT-14 communications satellite to the intended elliptical orbit.

After two second stage rocket firings, the satellite was released into an elliptical geostationary transfer orbit about 32 minutes after launch. On-board thrusters will be used to raise the low point of the orbit, putting the relay station in a circular orbit 22,300 miles above the equator.

In such orbits, satellites take 24 hours to complete one trip around the planet, thus appearing to hang stationary in the sky.

JCSAT-14 is owned by Sky Perfect JSAT Corp., the only non-governmental provider of multi-channel pay television and satellite communications in Japan and a major communications provider across Asia and Oceania. JCSAT-14 will boost the company's fleet of relay stations to 17.

Built by Space Systems/Loral, the new satellite is equipped with 26 C-band and 18 Ku-band transponders. With a design life of 15 years, the satellite will replace the aging JCSAT-2A now stationed at 154 degrees East longitude.

For SpaceX, Friday's launching was the fourth of more than a dozen flights planned this year, an ambitious launch rate that reflects the company's growing presence in the commercial launch industry.

In the near term up to four more flights are planned in the next month and a half: two commercial satellite launchings from Cape Canaveral, launch of a science satellite from Vandenberg Air Force Base, Calif., and a space station resupply launch near the end of June.

"Our launch rate is going to continue to grow," Musk said after the April space station resupply launch. "We're expecting by maybe the third or fourth quarter that we would be