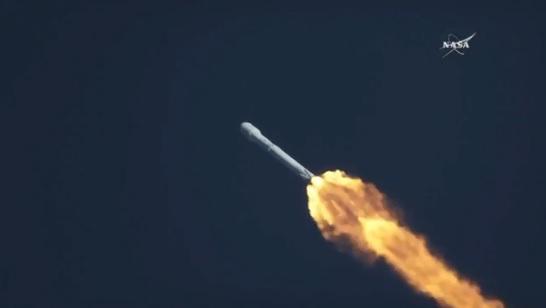 SpaceX engineers pressed ahead Wednesday with preparations to launch a Falcon 9 rocket carrying a $337 million planet-hunting satellite that NASA hopes will take the search for planets beyond Earth's solar system to another level.

Running two days late because of an unexplained guidance, navigation and control issue, the Falcon 9 was poised for liftoff from pad 40 at the Cape Canaveral Air Force Station at 6:51 p.m. EDT (GMT-4), the opening of a 30-second window. Forecasters predicted a better than 90 percent chance of favorable weather.

SpaceX planned to attempt recovery of the booster's first stage with a rocket-powered descent to touchdown on an offshore droneship, the "Of Course I Still Love You." Going into this week's launch, SpaceX's record stood at 23 successful recoveries, 11 on land and 12 on automated droneships.

But the primary goal of the flight was to launch NASA's Transiting Exoplanet Survey Satellite, or TESS, a relatively modest spacecraft equipped with four state-of-the-art digital cameras designed to measure the light from millions of stars in search of the tell-tale dimming that occurs when an exoplanet moves in front, or "transits."

The mission builds on the legacy of NASA's Kepler space telescope, which examined a smaller area of the sky and confirmed the presence of thousands of planets and, by extension, hundreds of billions across the Milky Way.

During its two-year primary mission, TESS will expand the search across 85 percent of the sky, on the lookout for Earth-size or slightly larger worlds worthy of follow-on studies by NASA's James Webb Space Telescope and other ground- and space-based instruments now under development.

The ultimate goal is to use those larger observatories to spectroscopically examine light passing through an exoplanet's atmosphere to determine its composition and, possibly, to detect the chemical byproducts of life.

"You can think of TESS as the finder scope for the James Webb Space Telescope," astrophysicist Padi Boyd, TESS deputy project scientist, told CBS News. "TESS is basically the discoverer, it's going to find the really exciting planets that we can then follow up with powerful telescopes."

Paul Hertz, director of astrophysics at NASA Headquarters, said with those larger telescopes, "we'll be able to look for tell-tale signs in the atmospheres of those planets that might tell us what the planets are made of and perhaps even whether they have the kinds of gases that on Earth are an indication of life."

"TESS itself will not be able to find life beyond Earth," he said, "but TESS will help us figure out where to point our larger telescopes in that search."