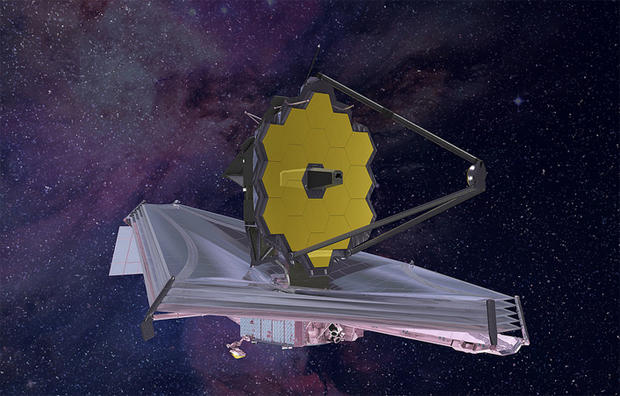 hugely successful HubbleLaunch of NASA's James Webb Space Telescope, the long-delayed successor to the hugely successful Hubble, faces yet another slip, NASA announced Tuesday, moving from 2019 to around May 2020 to give engineers more time to work through a host of technical issues and make sure the world's most expensive robotic spacecraft will work as advertised.

The delay could push the telescope beyond its congressionally mandated $8 billion cost cap, forcing NASA to seek reauthorization from lawmakers to keep the project on track.

NASA's budget includes another $800 million or so for five years of operations in space, but does not include the cost of Webb's Ariane 5 rocket, being provided by the European Space Agency in exchange for observing time, or the cost of science instruments developed by ESA and the Canadian Space Agency.

No matter the accounting, the James Webb Space Telescope is the most expensive science satellite ever built, second only to the International Space Station when piloted spacecraft are included.

From the beginning, the enormously complex telescope, designed to capture light from the first generations of stars and galaxies, was a daunting technological challenge for NASA and Northrup Grumman, the prime contractor, with repeated delays and escalating costs as engineers worked through a steady stream of technical issues and management miscues.

How Sandy morphed from "boring" to killer superstorm

The two major components of the telescope -- the optical system with its mirrors and instruments and the spacecraft "bus" housing computers, propulsion systems, communications gear and other critical systems -- are both now at Northrup Grumman's processing facility in Callifornia undergoing tests and integration.

The latest delay follows reviews that uncovered avoidable missteps by Northrup Grumman and technical surprises no one was expecting. For example, mistakes testing and servicing propulsion system components triggered unexpected delays and engineers ran into problems with cables used to deploy the observatory's critical sunshield.

The five-layer shield, folded at launch, is designed to expand to the size of a tennis court in space, allowing Webb's sensitive optics and instruments to operate at ultra-low temperatures around 50 degrees above absolute zero.

The layers of the sunshield are stretched out, separated from each other and kept under tension using motor-driven cables. During testing, the cables developed more slack than expected and multiple rips up to four inches long developed in the fabric of the shield.

Assessing those issues and others -- a heater was damaged when incorrect voltage was applied, for example -- "NASA has determined that the Webb launch date milestone will be delayed ... by more than six months and its development cost might exceed the $8 billion limit," Lightfoot said.

Additional reviews are planned between now and this summer to get a better handle on what additional funding might be required, where that money might come from and to get a better idea of the technical hurdles remaining.

NASA announced a series of major management changes to get Webb across the finish line in 2020, including more hands-on involvement by senior agency personnel, both at agency headquarters and at Northrup Grumman, extensive changes to improve communications across the program and establishment of a standing independent review panel chaired by Thomas Young, a widely respected aerospace manager.

Thomas Zurbuchen, NASA chief of science operations, said it is imperative that NASA and its contractor not cut any corners and resolve problems now, while the telescope is on the ground, because Webb is bound for an orbit where it will be beyond any help if trouble develops.

"Extensive and rigorous testing is necessary to ensure that we have a launch and deployment checkout that succeeds with high confidence," he said. "Webb will journey to an orbit about a million miles from the Earth, four times farther than the moon. Simply put, we have one shot to get this right before going into space. ... Really, failure is not an option."

In a statement, Northrup Grumman said the company "remains steadfast in its commitment to NASA and ensuring successful integration, launch and deployment of the James Webb Space Telescope, the world's most advanced space telescope."

Optimized to study infrared light emitted from the very first stars and galaxies to fire up in the wake of the big bang birth of the cosmos 13.8 billion years ago, the JWST is expected to provide key insights into galaxy evolution, aid in the search for exoplanets and inform theories about the birth and ultimate fate of the universe.

The stakes are extraordinarily high for NASA and its partners. Unlike Hubble, which was launched into low-Earth orbit by a space shuttle and periodically serviced, upgraded and repaired by spacewalking astronauts, the JWST will be boosted to a location known as the sun-Earth Lagrange point No. 2 -- L2 -- about one million miles from Earth.

As such, the JWST will be completely on its own once launched, and all of its complex systems must work as designed right out of the box. It was not designed for servicing by spacewalking astronauts and in any case, no piloted spacecraft is available or planned that could reach the telescope and latch onto it for repairs or upgrades.

The telescope will launch atop an Ariane 5 rocket, it's primary mirror, appendages and sunshield folded to fit inside the booster's nose cone fairing.

The basic design of the telescope is familiar. It features a large primary mirror to collect and concentrate starlight that will be reflected up to a 2.4-foot-wide secondary mirror that, in turn, will bounce it back down toward the center of the primary where the aft optical assembly protrudes. There, the light will hit a fixed tertiary mirror that will bounce starlight back up to a small "steering" mirror.

So far so good. But getting all of the telescope's mirror segments, appendages and sunshade to deploy properly represents an enormous technological challenge.

It will take a full month for the JWST to reach its operational station at the L2 point. Along the way, it will begin unfolding like a huge mechanical origami. Two panels of primary mirror segments will deploy to form the full-diameter primary, along with erection of a three-legged mast supporting the secondary.

Radiator panels will rotate into place, its main high-gain antenna will deploy and the giant five-layer sunshield will open and stretch into position to shade the optical system.

All together, more than 300 mechanical deployments must be carried out compared to about 70 on the Mars Curiosity rover. As one might expect, building a space telescope of such power and complexity has been extremely challenging. And expensive.

First proposed in 1995, the Next Generation Space Telescope, as it was then known, featured a 13-foot mirror and systems optimized for a relatively narrow infrared bandwidth. Rough estimates put the cost of the proposed observatory between $500 million and $1 billion.

Northrup Grumman was named prime contractor in 2002 and as the design matured and capabilities grew, the projected cost climbed to $2.5 billion with launch expected around 2010.

By 2005, the launch date had slipped two years and the project's life-cycle costs had climbed another $2 billion to $4.5 billion. Three years after that, a program review put the cost at $5 billion and estimated launch in 2014.

Finally, in 2010, Congress ordered an independent review, which concluded the JWST program had been poorly managed by NASA and would cost at least $6.5 billion. NASA conducted an extensive replanning exercise and reported to Congress in 2011 that JWST would cost $8.8 billion and that launch would slip to October 2018.

But that target date did not hold up. Late last year, after the JWST team burned through the remaining available reserve time built into the schedule to handle unexpected problems, NASA announced launch would slip to the March-June timeframe in 2019.

The delay was intended to give engineers more time to work through any final hurdles that might crop up and to prevent the sort of schedule pressure that could lead to costly mistakes.

Since then, additional issues came to light, prompting NASA to order the latest delay to the spring of 2020.

"We're very confident that with these enhancements we'll get to a place that will allow us to have a higher confidence level that the telescope functions as expected before it travels to French Guiana, South America, and launches into space," he said.