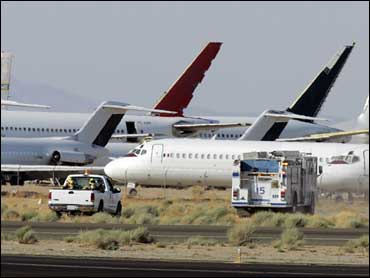 As a female voice coos, "Welcome to space," six passengers in skintight spacesuits unbuckle their seatbelts and somersault in zero gravity, occasionally peeking back at Earth through the private spaceship's large portholes.

Virgin Galactic showed off this animated video promoting the weightless joys of commercial space travel at a trade show for experimental aircraft last month. But the excitement was overshadowed three days later when a deadly flash explosion rocked a Mojave Desert facility where top-secret tests were underway for Virgin's unfinished spaceship.

The accident at the remote site run by famed aerospace designer Burt Rutan rattled the fledgling space tourism industry, which has enjoyed a honeymoon period since 2004 when Rutan launched SpaceShipOne, the first private manned rocket into space.

It also offered insight into how two pioneering companies that forged an unlikely partnership two years ago to fly civilians to space reacted to the tragedy. In a reversal of roles, Richard Branson's publicity-seeking Virgin Galactic kept a low profile while its usually silent partner, Rutan's Scaled Composites LLC, took to the Internet to mourn its workers.

Some space experts believe Virgin Galactic is following the right strategy because the accident was of an industrial nature and not directly related to spaceflight. But eventually customers and the public will demand answers, they say.

"It's natural for a company to not be out there talking immediately afterward. I don't think that would be good PR (public relations)," said Kathleen Allen of the University of Southern California's Marshall School of Business, who follows the commercial space industry.

Virgin Galactic did privately contact its prized customers known as founders, who have paid the full $200,000 to be among the first to experience four minutes of weightlessness.

Stephen Attenborough, Virgin Galactic's astronaut liaison, reassured the founders in an e-mail that the accident's impact on the first commercial spaceflights - expected in late 2009 or 2010 - will be "minimal" and that it was "business as usual."

In a telephone interview, Virgin Galactic President Will Whitehorn said it is not the company's place to comment because the blast occurred in Rutan's backyard. He added that four new customers have signed up since the mishap and none of the astronauts-in-waiting have asked for a refund.

"It hasn't affected Virgin Galactic as a business at all," Whitehorn said. "It hasn't put a stop to anything."

The Mojave accident invoked memories of NASA's Apollo 1 tragedy 40 years ago in which three astronauts were killed in a flash fire during a routine launch pad test. The accident forced NASA to temporarily halt its space race with the Soviet Union and make design changes that led to the successful moon landings.

In Scaled's case, three technicians died and three others were critically injured while performing a routine cold-flow test of nitrous oxide that did not involve a rocket firing. The company, which has done the test numerous times before without a problem, uses the chemical as an oxidizer in its spaceship's hybrid rocket motor.

California occupational safety regulators are investigating the July 26 explosion and have six months to complete a report.

The first fatalities of the new space race stunned the commercial space community, which until now has spoken about risks in abstract terms.

Exactly how the accident will affect other companies building their own spaceships is unclear since most are working on different propulsion technologies. However, the Personal Spaceflight Federation, made up of more than a dozen private space companies, pledged to plow ahead despite the tragedy.

Before the accident, hardly anything was known about Scaled's progress on its suborbital spaceship program. Afterward, Rutan admitted for the first time the company was testing a propellent system for SpaceShipTwo, the successor to SpaceShipOne. Many details about the program are still unknown including how far along Scaled is.

Rutan also opened up a bit about his relationship with Virgin, calling it "clumsy" as he explained Scaled's silence.

"This whole program for Richard Branson's company is a program that's clumsy for us, because it's announced but not unveiled," Rutan said on July 26. "So we have for a year and a half here been not answering any questions at all about the program."

Rutan did not respond to e-mails seeking additional comment.

Scaled has since shed some of its stoic image. Its technical Web site was transformed into a virtual shrine for the three rocket workers killed in the line of duty. It set up a memorial fund, posted poignant online remembrances and gave updates on funeral arrangements and conditions of the injured, who are expected to survive.

Scaled also sought outside experts to determine what went wrong and vowed to share lessons learned with the industry to prevent another accident.

"Burt is taking it hard because it's the first time he's lost people. There is a feeling of shock that some of his friends died," said space business consultant Thomas Matula.

Virgin Galactic reacted to the accident by posting a three-line condolence message on its Web site under the heading "Mojave Incident." Its unusual public silence caused some in the British press to speculate about its future and prompted Whitehorn to write a rebuttal in London's Evening Standard newspaper.

Virgin Galactic's relative silence is a far cry from its publicity blitz at the Experimental Aircraft Association trade show in Oshkosh, Wisconsin.

Whitehorn talked about the ease of a Virgin Galactic spaceflight. "You don't have to learn to speak Russian or train for six months in order to go on SpaceShipTwo," he said.

Tai gushed about SpaceShipTwo's hybrid rocket motor: "We know it's going to be the safest way to go into space. There's no moving parts in it, which means it's pretty much impossible for that thing to fail."