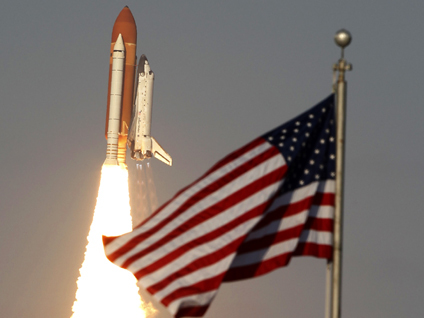 CAPE CANAVERAL, Fla. - Discovery, the world's most traveled spaceship, thundered into orbit for the final time Thursday, heading toward the International Space Station on a journey that marks the beginning of the end of the shuttle era.

The six astronauts on board, all experienced space fliers, were thrilled to be on their way after a delay of nearly four months for fuel tank repairs. But it puts Discovery on the cusp of retirement when it returns in 11 days and eventually heads to a museum.

Trouble with an Air Force range safety system computer put the launch in doubt as the countdown ticked into its final stages, CBS News space consultant Bill Harwood reports. To give repair crews as much time as possible, Launch Director Mike Leinbach ordered engineers to pick up the countdown at the T-minus nine-minute mark and to press ahead toward launch.

But the problem was not immediately resolved and the countdown entered an unplanned "hold" at the T-minus five-minute mark, Harwood reports. Finally, with just three seconds left to make the end of the launch window, the glitch was resolved, the countdown resumed and Discovery blasted off at 4:53:24 p.m. ET.

Discovery is the oldest of NASA's three surviving space shuttles and the first to be decommissioned this year. Two missions remain, first by Atlantis and then Endeavour, to end the 30-year program.

It was Discovery's 39th launch and the 133rd shuttle mission overall.

"Enjoy the ride," the test conductor radioed just before liftoff. Commander Steven Lindsey thanked everyone for the work in getting Discovery ready to go: "And for those watching, get ready to witness the majesty and the power of Discovery as she lifts off one final time."

Emotions ran high as Discovery rocketed off its seaside pad into a late afternoon clear blue sky, and arced out over the Atlantic on its farewell flight.

Discovery will reach the space station Saturday, delivering a small chamber full of supplies and an experimental humanoid robot. "Look forward to having company here on ISS in a couple days," station commander Scott Kelly said in a Twitter message.

The orbiting lab was soaring over the South Pacific when Discovery blasted off.

"Discovery now making one last reach for the stars," the Mission Control commentator said once the shuttle cleared the launch tower.

On-board TV cameras showed some pieces of foam insulation breaking off the external fuel tank four minutes into the flight, but shouldn't pose any safety concerns because it was late enough after liftoff.

NASA is under presidential direction to retire the shuttle fleet this summer, let private companies take over trips to orbit and focus on getting astronauts to asteroids and Mars.

An estimated 40,000 guests gathered at Kennedy Space Center to witness history in the making, including a small delegation from Congress and Florida's new Gov. Rick Scott. Discovery frenzy took over not only the launch site, but neighboring towns.

The launch team also got into the act. A competition was held to craft the departing salutation from Launch Control: "The final liftoff of Discovery, a tribute to the dedication, hard work and pride of America's space shuttle team." Kennedy's public affairs office normally comes up with the parting line. Souvenir photos of Discovery were set aside for controllers in the firing room. Many posed for group shots.

Lindsey and his crew paused to take in the significance of it all, before boarding Discovery. They embraced in a group hug at the base of the launch pad.

Unlike the first try back in November, no hydrogen gas leaked during Thursday's fueling.

NASA also was confident no cracks would develop in the external fuel tank; nothing serious was spotted during the final checks at the pad. Both problems cropped up during the initial countdown in early November, and the repairs took almost four months. The cracks in the midsection of the tank, which holds instruments but no fuel, could have been dangerous.

The lengthy postponement kept one of the original crew from flying.

Packed aboard Discovery is Robonaut 2, or R2, set to become the first humanoid robot in space. The experimental machine — looking human from the waist up — will remain boxed until after Discovery departs. Its twin was at the launch site, perched atop a rover, waving goodbye.

"I'm in space! HELLO UNIVERSE!!!" R2 announced in a tweet sent by a human still on Earth.

Discovery already has 143 million miles to its credit, beginning with its first flight in 1984. By the time this mission ends, the shuttle will have tacked on another 4.5 million miles. And it will have spent 363 days in space and circled Earth 5,800 times when it returns March 7.

No other spacecraft has been launched so many times.

Discovery's list of achievements include delivering the Hubble Space Telescope to orbit, carrying the first Russian cosmonaut to launch on a U.S. spaceship, performing the first rendezvous with the Russian space station Mir with the first female shuttle pilot in the cockpit, returning Mercury astronaut John Glenn to orbit, and bringing shuttle flights back to life after the Challenger and Columbia accidents.

Discovery is expected to be eventually put on display by the Smithsonian Institution.

The most controversial nuke program ever: Operation Plumbbob