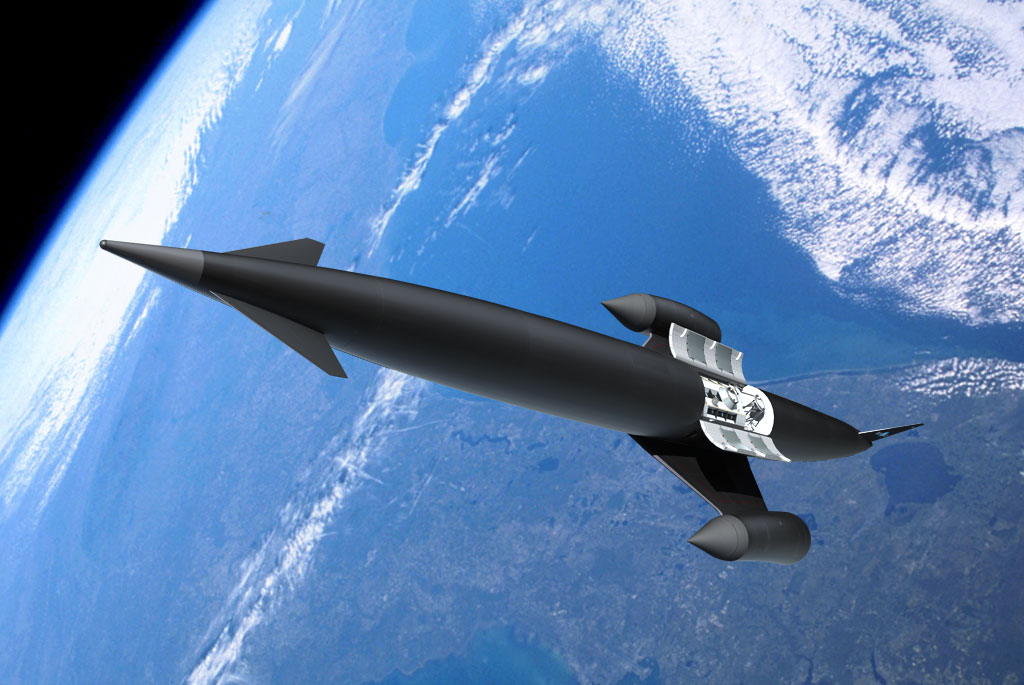 Engine technology being developed for a British space plane could also find its way into hypersonic aircraft built by the U.S. military.

The U.S. Air Force Research Laboratory is studying hypersonic vehicles that would use the Synergetic Air-Breathing Rocket Engine (SABRE), which the English company Reaction Engines Ltd. is working on to power the Skylon space plane, AFRL officials said.

"AFRL is formulating plans to look at advanced vehicle concepts based on Reaction Engine's heat-exchanger technology and SABRE engine concept," officials with AFRL, which is based in Ohio, told Space.com via email last month. [The Skylon Space Plane (Images)]

SABRE and Skylon were invented by Alan Bond and his team of engineers at the Abingdon, England-based Reaction Engines.

SABRE burns hydrogen and oxygen. It acts like a jet engine in Earth's thick lower atmosphere, taking in oxygen to combust with onboard liquid hydrogen. When SABRE reaches an altitude of 16 miles (26 kilometers) and five times the speed of sound (Mach 5), however, it switches over to Skylon's onboard liquid oxygen tank to reach orbit. (Hypersonic flight is generally defined as anything that reaches at least Mach 5.)

The SABRE heat exchanger is also known as a pre-cooler. It will cool the air entering Skylon's engines from more than 1,832 degrees Fahrenheit (1,000 degrees Celsius) down to minus 238 degrees Fahrenheit (minus 150 degrees C) in one one-hundredth of a second. The oxygen in the chilled air will become liquid in the process. [Skylon's Many Possible Missions (Video)]

"The [pre-cooler] performance has always been pretty much what we predicted," Bond explained in an interview with Space.com at the Farnborough International Airshow in England on July 16. "We've now done over 700 actual tests. It's now done as much service as a pre-cooler would in a real engine."

Bond's team has also successfully tested the pre-cooler for a problem aviation jet engines have to deal with: foreign objects being sucked in.

"We know it [the pre-cooler] can take debris, insects, leaves," Bond said.

Working with the U.S. military

Bond estimates that the pre-cooler is now at a technology readiness level (TRL) of about 5. NASA and AFRL use a 1-to-9 TRL scale to describe a technology's stage of development. According to NASA's TRL descriptions, 5 represents "thorough testing" of a prototype in a "representative environment."

The AFRL work is being carried out under a Cooperative Research and Development Agreement (CRADA) with Reaction Engines that was announced in January. AFRL officials told Space.com that they are using computers to model SABRE.

"The Air Force research laboratories in the States have carried out some modeling to verify that the SABRE does actually work, that it is a real engine, and so I am hoping they are going to confirm that very soon," Bond said.

"This is obviously opening doors in the United States, and again, I can't say a great deal about that, but we have very good dialogue going across the Atlantic," he added. "In the next couple of years, it's going to be quite exciting."

Bond sees Skylon as an international project that would include the U.S. and Europe.

"We're in dialogue with people across Europe in regard to supplying [rocket engine components]. We don't want to reinvent the wheel; we'd like to be the engine integrator and put it on our test facilities and run it," he explained.

Two SABRE engines are expected to be tested in 2019. "Hopefully, the earlier part of 2019," Bond said. "I'd like to feel we can test them on Westcott. That is where the rocket propulsion establishment used to be." (In the 1950s and 1960s, the United Kingdom had its own space program; the nation launched a satellite called Prospero with its last rocket, Black Arrow, in 1971. Westcott is about a one-hour drive from Reaction Engines' headquarters).

The SABRE development program is expected to cost 360 million British pounds ($600 million at current exchange rates). "We've got 80 million [British pounds] of the 360 million lined up. We're well on our way to that," Bond said.

Of the 80 million pounds, 60 million is from the U.K. government. As with the commercial ventures NASA supports, Reaction Engines has to meet milestones to acquire those government funds.

"We have to meet milestones, but those are programmatic issues," Bond said. "There is nothing contentious about that; it is just a matter of getting the work done to get there. I think of it as an R&D program, and we've done the 'R' bit, and this part forward is the 'D' bit. We've spent years making sure the technology actually works."

In January, this R&D program reached its third phase, which is split into four sections, known as 3A, 3B, 3C and 3D. Sections 3A and 3B are being carried out in cooperation with the European Space Agency (ESA).

Section 3A began in January and will last until April 2015. It involves the engine's system design, revising the engine's layout and studying the impact on Skylon's performance. This work will cost 8 million euros ($10.7 million, or 6.4 million British pounds), half of which will come from the U.K. government and ESA and the other half from Reaction Engines' private investment.

"This is it for real now; this isn't studies anymore," Bond said. Section 3A will continue until spring 2015, and section 3B is due to start in January 2015, he added. "That is the preliminary design phase,." Bond said."

Section 3B will last until the end of 2015. During this section, the characteristics of the engine components will be defined and technical specifications produced.

Section 3C, which starts from mid-2015, will see 10 million euros ($13.37 million, or 8 million British pounds) from the U.K. government spent. The section 3C work with suppliers overlaps section 3B. This is because some of the components will get specifications during 3B before other parts of the engine are fully defined. Those detailed components with specifications can then be given to prospective suppliers during the first few months of section 3C.

"In 3C, we start to do detailed design -- what the bearings will look like, who is the supplier going to be, that sort of stuff. This is really exciting stuff. We're starting to pull the real engine together during the course of next year," Bond said.