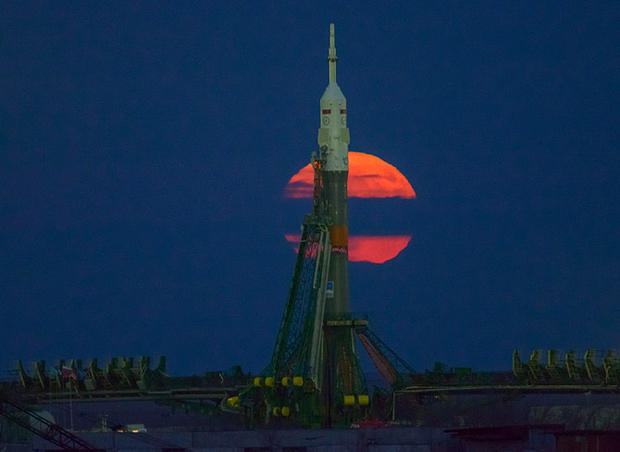 A veteran Russian cosmonaut, a rookie French flight engineer and a record-setting NASA astronaut making her third trip to the International Space Station are gearing up for launch Thursday aboard an upgraded Soyuz ferry craft, kicking off a two-day flight to the orbital lab complex.

As with all missions to the space station, the launching is timed to coincide with the moment Earth’s rotation carries the pad into the plane of the lab’s orbit, a rendezvous requirement for spacecraft trying to match orbits with a target streaking through space at five miles per second.

The Soyuz MS-03 spacecraft is the third in a series of upgraded ferry craft featuring improved propulsion, navigation and communications systems. As with the first two flights in July and October, Novitskiy’s crew will carry out a two-day rendezvous with the station to give Russian flight controllers more time to put the new systems through their paces.

Whitson said she had hoped the first two MS-series flights would clear the way for resumption of shorter four-orbit rendezvous profiles because “two days on board the Soyuz isn’t as good as two days on board the space station.” But she said the additional testing will ensure the upgraded spacecraft is safe in all phases of flight.

“Definitely, all the changes they’ve put in have improved the reliability of the vehicle,” she said. “That’s how the Russians do their progression -- it’s small steps changing out a few things at a time, making sure they work before they progress to the next level.

“I think it’s a very reliable vehicle to begin with, and I think the changes they’ve put in will make it even more reliable.”

If all goes well, Novitskiy will oversee an automated rendezvous and docking at the lab’s Russian Rassvet module, arriving at the Earth-facing port around 5:01 p.m. Saturday. Standing by to welcome them aboard will be Expedition 50 commander Shane Kimbrough, Sergey Ryzhikov and flight engineer Andrey Borisenko.

They were launched to the station Oct. 19 aboard the Soyuz MS-02 spacecraft, joining Soyuz MS-01 commander Anatoly Ivanishin, Japanese astronaut Takuya Onishi and NASA biochemist Kate Rubins. Ivanishin and his crewmates returned to Earth on Oct. 30, leaving Kimbrough, Ryzhikov and Borisenko on their own.

With the addition of Novitskiy, Pesquet and Whitson, the lab’s crew will be back up to its full complement of six, clearing the way for a full slate of research activity.

Whitson, 56, holds a doctorate in biochemistry. She is America’s most experienced female astronaut, a veteran of two long-duration stays aboard the station in 2002 and 2007-08 totaling nearly 377 days aloft. She served as commander of the station during her second visit and was the first non-military pilot, and first female, to serve as chief of NASA’s astronaut office at the Johnson Space Center.

During her third space flight, Whitson will set a new record for most time in space by a U.S. astronaut. On April 24, she will surpass the 534-day mark set in September by astronaut Jeff Williams.

But it’s the science, not records, that holds Whitson’s attention.

“One of the more interesting experiments for me, because of my background, is going to be looking at how stem cells grow and also potentially looking at how a bacteria grows and multiplies and how mutations occur and doing the genetic sequencing of those cells,” she said.

She said earlier that she’s particularly looking forward to carrying out research to learn more about how the immune system works in the weightless environment of space to help pave the way for long-duration missions beyond low-Earth orbit.

“We’re trying to understand why crew members sometimes have more rashes or more allergies than we do on the ground, and trying to improve how people live in space for long periods of time,” she said in an interview. “Obviously, we’ve been looking at bone loss for quite some time, and we’re continuing with that, trying to understand what is the minimum amount of exercise you can (safely) do.”

Space station astronauts currently spend two hours a day exercising, using treadmills and resistive weight machines to keep in shape. Whitson said she will participate in tests of a new, smaller exercise device during her upcoming mission that may prove useful for astronauts on deep space missions who will be confined to smaller spacecraft.

Another experiment of interest to Whitson, one that also could prove useful for deep space explorers, is one devoted to studying X-rays emitted by neutron stars, the collapsed high-gravity cores of massive stars that exploded in the distant past.

Along with studying the basic physics of neutron stars, the experiment also will help engineers assess the possible use of such X-ray beacons as a sort of cosmic GPS navigation system.

“And that could prove to be space navigation just like we have GPS satellites around the Earth. Once we leave Earth, we don’t have GPS any more. So this would be the next level of our GPS system, except it would be at a much bigger scale.”

Like Whitson, Novitskiy is a veteran space station crew member, serving as a flight engineer during a 144-day visit in 2012-13. Pesquet, an aerospace engineer and veteran Air France pilot, is making his first flight.

Asked if he had any fear about riding into space on top of a rocket, Pesquet said: “If you’re not afraid, it doesn’t mean you’re brave, it means you’re crazy.”

He said flying with veterans like Novitskiy and Whitson was a definite bonus, joking that Whitson “built the space station by herself.”

“It’s really a long process for me to learn from these two guys, and I think we’re in good shape now,” he said. “It’s going to be exciting. I hope I haven’t forgotten anything in my suitcase for that big upcoming trip!”

Novitskiy said he had no worries in that regard.

“I think it’s great to have him as a left seater,” Novitskiy said, referring to the flight engineer’s position in the command module. “He works very fast, and he’s a real professional. He knows the systems very well, and the training has been going fantastically well, too. So I’m fully confident it will be just as great during the flight.”

Whitson said all three crew members get along well and enjoy each other’s company.

“It’s been really a great time training with these two guys, they’re both extremely professional, which I respect and admire, and that’s what I like having on the team, that professionalism,” she said.

“But what’s really neat about them that makes them a little bit unique is that we really have a lot of fun together, too. Oleg has a great sense of humor and he’s willing to laugh at himself. And Thomas is the comedian of the team and entertains us quite well.”

During their stay aboard the space station, Whitson and company will welcome a Russian Progress cargo ship on Dec. 3 and a Japanese HTV freighter on Dec. 13. The HTV is loaded with six state-of-the-art lithium-ion batteries that will replace 12 aging nickel-hydrogen batteries in one set of the station’s solar arrays.

The batteries will be installed during at least two spacewalks in January. Whitson and Kimbrough are spacewalk veterans and both have trained for the battery swap out, as has Pesquet. NASA has not yet identified who will venture outside in January.

Additional spacewalks are tentatively planned in the March-April timeframe to attach a short tunnel-like pressurized mating adapter to a port on the forward Harmony module that eventually will be used by commercial crew ships being built by Boeing and SpaceX. One such port already is attached to the front of the station.

Along with routine research and spacewalk planning, the station crew also hopes to welcome two SpaceX Dragon cargo ships, one in January and one in March, along with a Progress supply craft in January and an Orbital ATK Cygnus cargo ship in February. SpaceX, however, is still recovering from a Sept. 1 launch pad explosion, and while the company hopes to resume launchings in December, it’s not yet clear when the Dragon cargo missions will actually fly.

“If everything goes and we get all the vehicles that are planned, we will have a very exciting and busy mission,” Whitson said. “I anticipate it’s going to be busy no matter what we end up having because the ground is great at finding things for us to work on depending on what’s available.

“Some of those fine details we don’t know yet. But we’re an adaptable crew, we’ll be able to do whatever it is they give us to do, and we’re looking forward to it. We have an incredible number of scientific investigations, some are already on board, some will be arriving while we’re up there, and we’ll be able to continue to conduct research no matter what the shuffle is.”

And along the way, Pesquet may provide a bit of entertainment. He hopes to carry up a saxophone. While he said he was out of practice and “not good at all,” he looks forward to finding a quiet corner and trying his hand again.

“You never know. It could be really cool on a Sunday,” he told reporters. “I hope it won’t bother my crewmates, I’ll try to find the most isolated corner of space station so that in case I’m really not doing well at all it won’t be too much pain for you guys.”

Said Whitson: “We’ll let you know whether or not he’s any good.”