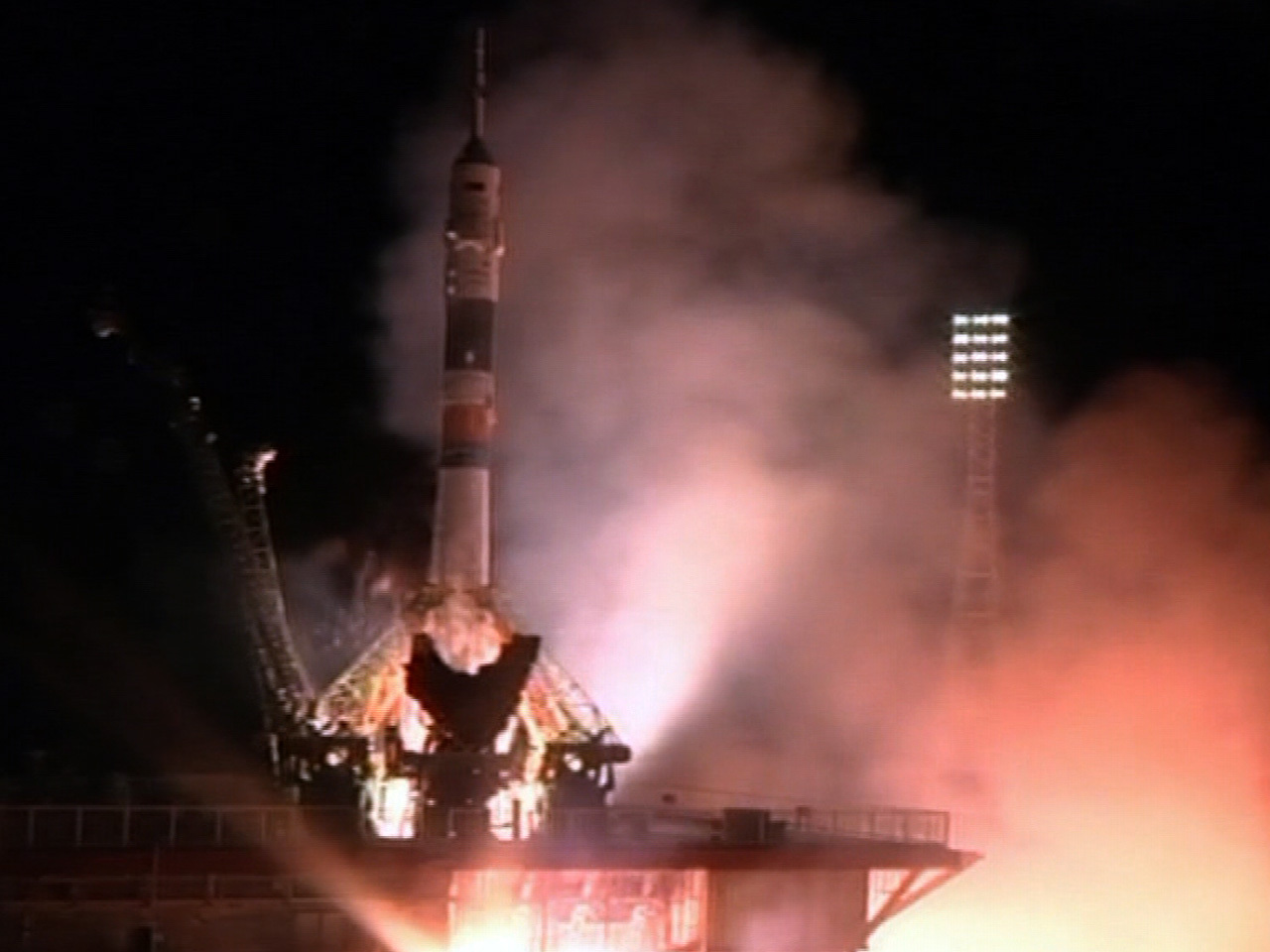 MOSCOWA Russian Soyuz rocket blasted off and thundered into orbit Tuesday carrying a veteran cosmonaut, a NASA shuttle veteran and a rookie Italian test pilot on a smooth six-hour flight to the International Space Station.

With Soyuz TMA-09M commander Fyodor Yurchikhin at the controls, flanked by European Space Agency astronaut Luca Parmitano on his left and shuttle veteran Karen Nyberg on his right, the Russian ferry craft glided to a flawless docking at the station's Russian Rassvet module at 10:10 p.m. EDT (GMT-4), just four orbits after launch from the Baikonur Cosmodrome in Kazakhstan.

"I'm so happy that you feel really at home," Yurchikhin's wife, Larisa Anatolievna Yurchikhina, told her husband during a post-docking video conference. "I love you so very much, my dear."

Replying from the station's Russian command module, Yurchikhin said: "I'd like to say to you, you're the greatest girl in the world, and I love you so very much. And this is for everybody to hear."

Cassidy, a Navy SEAL, surprised the arriving crew members by greeting them with a shaved head, matching Parmitano's bald pate.

Nyberg's husband, shuttle pilot Douglas Hurley, said the crew looked good, but "there are way too many bald guys on space station right now. Have a great time up there."

"Hey there, I'm glad you enjoyed the launch," Nyberg replied. "It was a pretty cool ride."

As for Cassidy's haircut, or lack thereof, "I told Chris he looks awesome like this!" Parmitano said.

The combined crew faces a particularly busy summer and fall in space, with up to six spacewalks on tap, the arrival of four cargo ships -- including the maiden visit by a commercial cargo craft built by Orbital Sciences Corp. -- and a full slate of scientific research.

Toward the end of the TMA-09M crew's stay, the Olympic torch will be carried aloft by three crew members scheduled to arrive Nov. 7. The torch, heralding the 2014 Winter Games in Sochi, Russia, will be carried outside during a spacewalk Nov. 9 and returned to Earth Nov. 11 by Yurchikhin, Parmitano and Nyberg.

"The International Space Station is a great achievement by many countries around the world," said astronaut Richard Mastracchio, who will help deliver the torch to the lab complex later this year. "The Olympics represents that exact idea, many countries getting together to compete in peaceful times and show how we can get along on this planet.

"We're going to carry up the torch, and we're going to hand it off. ... So we'll have our own relay going, around the world."

Yurchikhin, Parmitano and Nyberg began their planned 165-day voyage at 4:31:24 p.m. (2:31 a.m. Wednesday local time) when their Soyuz booster roared to life, lighting up the night sky with a burst of fiery exhaust.

Vaulting away from its launching pad -- the same pad used by Yuri Gagarin at the dawn of the space age -- the workhorse rocket quickly accelerated as it gulped its load of liquid oxygen and kerosene propellants, arcing away to the east as it climbed into the plane of the space station's orbit.

Live television from inside the cramped Soyuz command module showed all three crew members as they monitored the automated ascent, looking relaxed despite the steadily building acceleration pushing them back into their custom seats.

The rocket's four liquid-fueled strap-on boosters, which operate collectively as the booster's first stage, shut down and fell away as planned about two minutes after launch, followed by the central second stage core booster three minutes after that.

The Soyuz rocket's third stage continued the push to space and eight minutes and 45 seconds after liftoff, the TMA-09M spacecraft was released into its planned preliminary orbit. A few moments later, the craft's two solar panels and navigation antennas deployed as expected.

The space station passed over the launch site just four minutes before liftoff at an elevation of about 77 degrees. When the Soyuz was released from its booster, Yurchikhin and company were trailing their target by about 2,550 miles.

Soyuz ferry craft flying to the space station have traditionally followed two-day 34-orbit rendezvous trajectories. But in recent months, the Russians have been testing single-day six-orbit rendezvous procedures, including the most recent manned flight to the station in March.

Yurchikhin first flew to the space station in 2002 as a shuttle astronaut on a mission to attach part of the lab's solar power truss. He then completed two long-duration stays, riding aloft aboard Soyuz spacecraft in 2007 and 2010. When Vinogradov, Misurkin and Cassidy depart in September, Yurchikhin will take over as commander of Expedition 37.

Parmitano, an Italian test pilot and European Space Agency astronaut, is making his first flight, serving as flight engineer, or co-pilot, aboard the Soyuz TMA-09M spacecraft.

Nyberg has a single previous spaceflight to her credit, a 16-day 2008 shuttle mission to deliver and install a Japanese laboratory module. Nyberg and Hurley have one child, 3-year-old Jack.

"All of us have children," she told a reporter before launch. "My son is 3 and he's going to do a lot of growing in six months. But I'm going to see a lot of video of him and I think we'll be very well connected. And he'll be home with his Daddy.

"But it's a challenge all of us have to deal with. ... So we can support each other, knowing we have families at home that we all miss."

Hurley, who piloted two shuttle missions, said his wife was well prepared for an extended stay aboard the station.

"Karen is meticulous about everything in her life and I think we've got a good plan to get our family through the next five months," he said in a NASA interview. "She can call us from the space station, we can do video conferences. I think we're wall prepared for this."

Nyberg holds a doctorate in mechanical engineering and will play a central role in research conducted in the U.S. segment of the space station. She also hopes to find time to enjoy the view from 250 miles up and to have more time to reflect than she did on her tightly timelined shuttle mission.

"There's a lot of that mission that I don't really remember," she said. "I look at pictures and I'm like, 'oh yeah, we did that.' I think with a longer period of time, I'll have time to actually get it ingrained in my brain of where I am and what I'm doing, and I won't need to go back and look at those pictures to remember what it is that I've done."

She also hopes to have more time to enjoy her hobbies, drawing and sewing.

But her family will never be far from her thoughts. While she isn't sure how much her son understands about his mom's job, "he knows I'm going to the space station and he knows what that is when he sees a picture of it and he knows there is no gravity there and things will float."

"I think it'll be very fun for him to see video of me and communicate with me when he sees me in that environment."