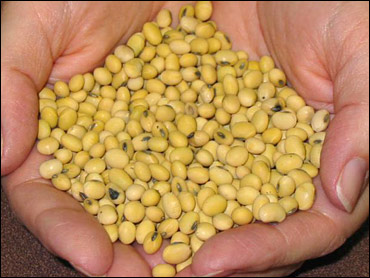 Never heard of soy nuts? They're dry-roasted soybeans. Like other soy foods,
they contain nutrients called isoflavones, along with 8 grams of fat and 240 calories in a half cup.

When it comes to lowering blood pressure, they may be a smart snack for women, a new study suggests.

The new study, published in the Archives of Internal Medicine, included 60 healthy postmenopausal women who were 53-58 years old, on
average.

At the study's start, 12 of the women had high blood pressure. They tended
to be a little heavier than the 48 other women with normal blood pressure based on average BMI (body mass index), which relates height to weight.

During the study, the women spent eight weeks on a healthy diet that didn't
include soy nuts. After that, they took a blood pressure test.

The women also spent another eight weeks on the same healthy diet. But this
time, they replaced some of their protein with half a cup of unsalted soy nuts, split into three or four portions spread throughout the day.

The women's blood pressure was lowest after eight weeks of snacking on soy
nuts, even for those who started the study with normal blood pressure.

Women with high blood pressure also had an 11% drop in levels of their LDL
("bad") cholesterol after snacking on the soy nuts for eight weeks. No
cholesterol benefits were seen in the women with normal blood pressure.

The study doesn't show why soy nuts were linked to lower blood pressure. But
the researchers write that diets that include soy foods "may be a practical, safe, and inexpensive" way to reduce blood pressure.

Larger studies should be done to confirm the findings, wrote the researchers, who included Francine Welty, MD, PhD. Welty is an associate professor of medicine at Harvard Medical School, preventive cardiologist at Boston's Beth Israel Deaconess Medical Center, and director of the National Heart, Lung, and Blood Institute's Specialized Center of Research in Vascular Injury, Repair, and Remodeling.

Men weren't included in this study, but other research suggests that soy foods may help men's blood pressure, Welty noted.

"The study was started to assess soy as an alternative to hormone replacement therapy. That's why men were not studied in this particular trial," Welty told WebMD.

She noted that two other published studies have shown blood pressure reduction in men and women who ate soy foods as part of their diet. One of those studies included soy cookies; the other included soy milk.