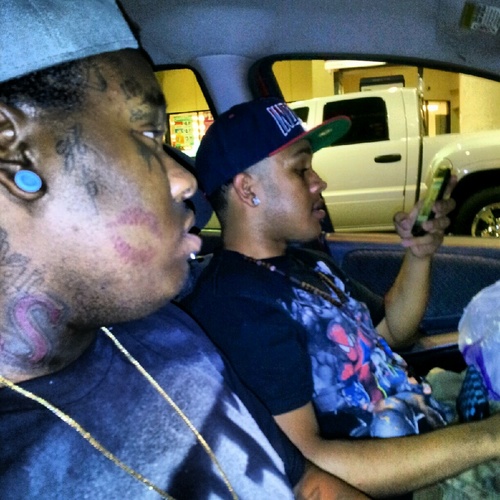 (CBS News) Erwin McKiness, an aspiring Southern California rapper also known as Jew'elz and Inkyy, died in a  suspected drunk-driving crash after reportedly tweeting the phrase "YOLO" - "You Only Live Once" - a phrase popularized by rapper Drake's song "The Motto."

"Drunk af going 120 difting corners #F**kItYOLO," tweeted the 21-year-old McKiness just before he and his friends died in a car accident on Sept. 2 in Ontario, Calif., reports the San Bernardino Sun.

McKinness was accompanied in the car by Marquell Bogan, 23, and Dylan George, 20, Jonathan Watson, 21, and JaJuan Bennett, 23. Bogan died at Kaiser Permanente Medical Center in Fontana, Calif. The others were pronounced dead at the scene.

While McKiness' tweet makes it sound as if he was behind the wheel, police said it was Watson who was driving, reports the paper.

According to police, the driver lost control of the 2005 Nissan Sentra after running a red light and slammed into a wall.

The police are still investigating the incident, but officers told the paper that there was a high likelihood alcohol was involved, based on the statements made before the crash.

The police were referring to the final tweet by @ink2flashyy, sent out at 1:20 a.m.

It read "Driving tweeting sipping the cup (expletive) yolo I'm turning it up."