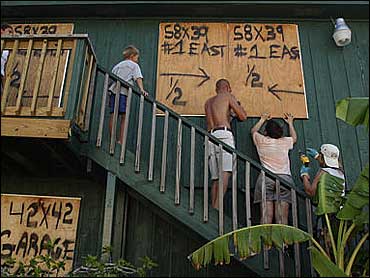 Far South Texas residents were urged Tuesday to take caution and move farther inland as an approaching Hurricane Emily gathered strength in the Gulf of Mexico.

"If they tell us to leave, we'll leave. We're not going to be that stubborn," said Jerilyn Howell.

So far, the only ones ordered out are about 600 recreational vehicles, vulnerable to high winds, reports

At 11 a.m. EDT, the storm was centered about 210 miles east of La Pesca, Mexico, and 235 miles southeast of Brownsville, Texas, moving west-northwest at about 14 mph. It had sustained winds of 90 mph and was expected to become a Category 2 hurricane later Tuesday.

The big question remained whether Emily would turn west toward Mexico or continue on a northwesterly track toward Texas' coast, the National Hurricane Center said.

"We stress the point that it still looks like it is going to go south of us, but there is always the potential," Hushen said. "We are all praying for that turn, but we have to be cautious. We have to look at the safety of the citizens."

Residents in Cameron county, which neighbors the Mexican border and sits on the Gulf Coast, were told if they didn't feel safe in their homes, they could go to one of three shelters that opened Tuesday at local schools. Hushen said additional shelters would open if needed.

By Tuesday, 90,000 sandbags had been distributed, windows boarded up on some homes and businesses and RVs at a beachside park on South Padre Island evacuated.

Hushen said RV and trailer owners who refused to leave were urged to at least tie down their mobile homes. Late Monday, about two dozen trailers and RVs remained in the park that once had 600.

Emily slammed into the Yucatan Peninsula on Monday as a Category 4 storm that ripped roofs off resort hotels, stranded thousands of tourists and caused flooding.

Yucatan Peninsula residents waded through knee-deep flood waters to assess damage Tuesday. Many are poor and came to the Yucatan Peninsula for jobs. They live in flimsy thatched huts just out of sight of the resorts.

Officials for the state of Quintana Roo estimated about 3,000 such huts were damaged or destroyed.

Tourists who spent the night in makeshift shelters emerged to try to find ways home. Many went to the Cancun airport, which reopened Monday after closing Sunday afternoon as the storm approached.

A steady stream of cars were crossing the border near Brownsville, Texas, Tuesday morning, hoping to avoid the brunt of the storm, reports Michael Board of CBS radio affiliate KTSA. Many Americans are cutting their vacations short, saying better safe than sorry.

But not Jack Howell.

"Noooo! Were going to hang out here and see what happens," he told Cobiella on South Padre Island.

After entering the Gulf of Mexico, Emily began strengthening as it moved on its west-northwesterly journey.

"Your luck can't be that good all of the time and we've been lucky," Cameron County park Ranger Arnold Flores said Monday night as he urged RV owners on South Padre Island to leave the resort city. "We haven't been hit like Florida has."

Still, some hoped the hurricane projected path would take Emily to Mexico and bring nothing more than some much needed rain to South Texas.

In Brownsville, drought-like conditions have persisted for months. Brownsville has gotten 2.85 inches of rain this year as of the end of June, which is about 8 inches below normal.

"My yard is kind of crunchy," South Padre Island restaurant owner Shawn Moore said. "I could use the rain."

"It's just like having a baby," Acevedo said. "You know it is coming, but you don't know what to expect. It's not frustrating, but just an antsy feeling, just a feeling that something is pending — something that is going to require a lot of work once it does come our way."