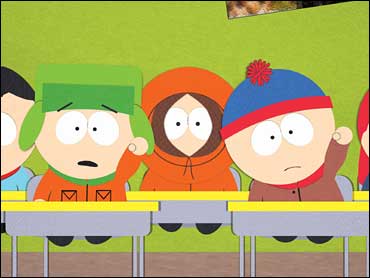 NEW YORK (CBS/AP) Trey Parker and Matt Stone, the producers and brains behind "South Park," said Thursday that Comedy Central censored a speech about intimidation and fear from their show after a radical Muslim group warned that they could be killed for insulting the Prophet Muhammad.

According to a statement released by the duo, the bleeps inserted throughout the controversial episode, particularly during about 35 seconds of dialogue between the cartoon characters of Kyle, Jesus Christ and Santa Claus, was not a joke or commentary on censorship, as some had speculated.

"It wasn't some meta-joke on our part," Parker and Stone said.

Earlier this week, the radical group Revolution Muslim said on its website that "South Park" had insulted their prophet during its 200th episode by depicting him in a bear costume.

The group said it wasn't threatening Parker and Stone, but the web post included a gruesome picture of Theo Van Gogh, a Dutch filmmaker killed by a Muslim extremist in 2004, and said the producers could meet the same fate.

The website posted the addresses of Comedy Central's New York office and the California production studio where "South Park" is made.

Despite that, Parker and Stone included the Muhammad character in this week's episode. Muhammad appeared with his body obscured by a black box labeled "censored," since Muslims consider a physical representation of their prophet to be blasphemous.

Parker and Stone said that in 14 years of making "South Park," which just had its 200th episode, they've never delivered an episode they couldn't stand behind.

"Kyle's customary final speech was about intimidation and fear," they said. "It didn't mention Muhammad at all but it got bleeped...We'll be back next week with a whole new show about something completely different and we'll see what happens to it."

Besides the censored dialogue, only one inside joke in this week's episode could be interpreted as a reference to the Muslim group's warning.

During one scene, a mechanized Barbara Streisand robot is seen stomping through the town on a path of destruction. One voice is heard to say, "they've destroyed La Casa Bonita!"

"La Casa Bonita" is the name of Parker and Stone's production facility.