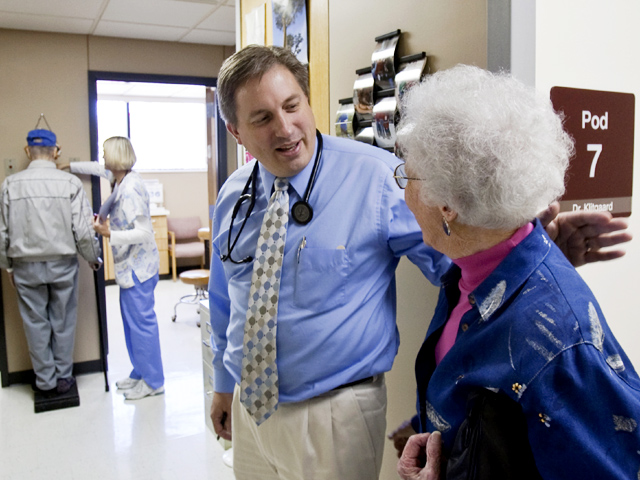 Health officials have been warning that while Americans are living longer than ever, they're also living sicker.

Now a new study from the Centers for Disease Control and Prevention (CDC) shows that where you live could go a long way in predicting how many healthy years you have left.

The study looked at healthy life expectancy (HLE), a measure of population health that combines overall death rates based on age with estimates of disease rates to come up with a number of years of good health a person can expect to have. In this case, researchers projected the HLE of people who are currently 65 years old.

Estimates were calculated using a combination of CDC public health data, Census Bureau reports, and telephone surveys conducted between 2007 and 2009.

Some overall health trends among seniors emerged. Starting at age 65, females had a greater HLE than males.

Whites had a greater HLE than blacks in every state except Nevada, New Mexico and the District of Columbia. (The CDC noted it did not have enough state-level data to calculate HLE estimates for the black population in 11 states, or for Hispanics, Asians and American Indians/Alaska natives.)

Regionally, HLE was generally lower in Southern states than elsewhere in the country. Florida was an exception, with higher life expectancy than the rest of the region. Researchers have dubbed some Southern states the "diabetes belt" and "stroke belt" because of high incidences of the diseases.One study tied the "stroke belt" to eating fried, fatty Southern foods.

In general, at age 65, HLEs within individual states varied by up to three years by gender and up to eight years by race, according to the study.

"Although HLE measures do not identify the reasons for poor health or shorter lives, they provide a snapshot of the health status of a population," wrote the researchers, led by CDC epidemiologist Man-Huei Chang.

In state-by-state rankings, the lowest HLE on the list was found in Mississippi, with an estimated 10.8 years of healthy years remaining at age 65. The state with the highest HLE, of 16.2 years, was Hawaii.

Other studies have shown similar trends.

The United Health Foundation's "America's Health Rankings Senior Report" in May found the least healthy state for seniors was Mississippi, reporting a high rate of early death among adults 65 and older, a low rate of seniors who report good health or go to the dentist and a high rate of seniors in poverty who are at risk for hunger. Hawaii ranked as the sixth healthiest state in that report, with Minnesota earning the top spot.

In the foundation's state health rankings for all ages, Mississippi tied Louisiana for the least healthy state. Vermont was the healthiest state in that report, followed by Hawaii.

Another study by the Robert Wood Johnson Foundation projected Mississippi to be the most obese state in the country by the year 2030.

The CDC hopes the results of its study can be used by states as a baseline measurement to monitor any changes and identify gaps and disparities among different races and genders. The authors note that many factors influence a person's health as they age, including living in a safe and healthy environment, engaging in healthy behaviors like exercise and not smoking, having access to good quality health care, and getting the recommended preventive medical care, including vaccines, blood pressure checks and cancer screenings.

The report also looked at overall life expectancy, regardless of healthy years. The CDC reported the state with the highest life expectancy was also Hawaii, with 21.3 remaining years estimated after an adult turns 65 years old. The states with the lowest were Mississippi and West Virginia, tied at about 17.5 remaining years of life from the age of 65.