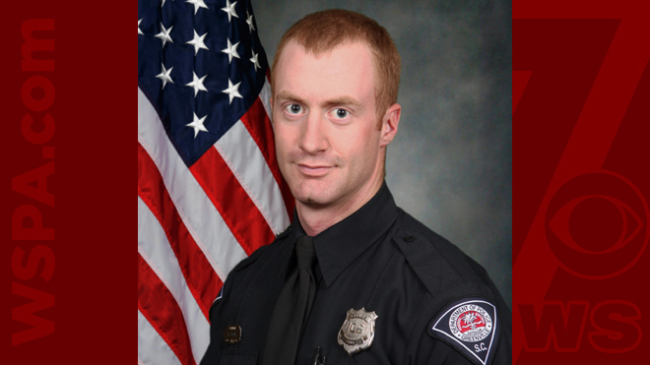 GREENVILLE, S.C. -- A South Carolina police officer was shot and killed Friday as he and a partner were trying to question a self-professed gang member who they had been told was trying to buy a gun, the chief said.

Greenville Police Chief Ken Miller told a news conference Friday that Officer Allen Jacobs and a second officer got out of their car and were trying to question Deondea Mackey, 17 when he ran from them.

Miller initially said the officers were trying to serve a warrant, but later said police were acting on a report that Mackey, a self-professed gang member with a criminal record, was trying to buy a gun.

Miller said Jacobs chased Mackey, who ran behind a house. The second officer was on the phone with a dispatcher when he heard gunshots and when he reached the scene, he found Jacobs on the ground, Miller said.

"Our officers who were here on the scene and who responded to assist performed CPR on our officer and the CPR was unsuccessful," Miller said.

The police department described Jacobs as a dedicated officer who worked on gang activity. He had been on the force for four-and-a-half years.

Jacobs was married and was the father of two young boys. His wife is pregnant with the couple's daughter due to be born in July.

Prior to joining the police department in 2011, he served in the U.S. Army and was a decorated Iraq War veteran and received numerous medals and commendations for his service.

A vigil was planned Saturday at Jacobs' church, and an online fundraising page had raised nearly $50,000 for his family.

Jacobs was wearing a chest-mounted body camera, but Miller said he didn't know if the camera was operating and added that the camera was shattered. The chief also said Jacobs' gun was still in his holster when his partner found him.

According to Miller, the pursuit of Mackey continued and he was spotted a short distance away. Miller said Mackey made a phone call before he shot and killed himself. The chief said earlier that Mackey had called his mother.

Miller didn't say what kinds of weapons were used in the shootings.