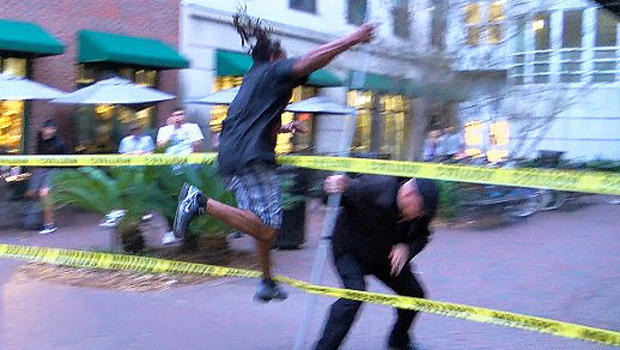 CHARLESTON, S.C. -- A South Carolina Black Lives Matter organizer has been arrested after he went airborne over a police barrier on live television to try to seize a large Confederate battle flag from a protester.

CBS affiliate WCSC-TV’s cameras were rolling when Moye jumped through police tape and tried to wrestle the flag away before being tackled by police.

The protest occurred outside near the Sottile Theater at the College of Charleston, where Bree Newsome was speaking about social justice and activism.

Newsome was arrested in 2015 after she climbed a flagpole and temporarily removed the Confederate flag from in front of the South Carolina Statehouse. Newsome’s charges were later dropped.