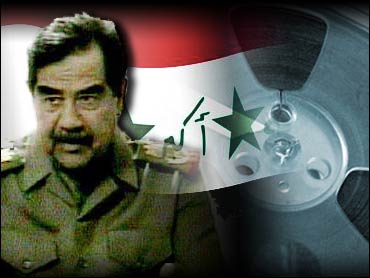 Saddam Hussein continues to poke the U.S. in the eye with new audiotapes. The latest, handed over to a reporter in downtown Baghdad, was the most belligerent yet, reports CBS News Correspondent Jim Stewart.

And just like others, it was apparently void of clues. The tape was described as "shaky," "filled with background noise" and "rerecorded over either a phone or a computer."

A U.S. intelligence official said Friday that the new tape is probably authentic and was likely recorded recently. The finding is further evidence that Saddam survived the war.

The poor quality of the recording prevents technical analysts from being absolutely certain of its authenticity, the official said, speaking on the condition of anonymity. But references to recent events suggest it is a recent recording, this official said.

The man on the recording said he was speaking on July 14 and made reference to the new Governing Council of Iraq, which was established Sunday.

Saddam's fate has been uncertain since the war began on March 21. Twice information on his whereabouts was deemed solid enough that an airstrike was sent to kill him.

But since the war, U.S. intelligence analysts have become increasingly certain that he survived. Officials say they believe he remained in Iraq.

The new audio message was aired Thursday, marking the 35th anniversary of the coup that brought Saddam's Baath Party to power. The apparent voice of Saddam urged Iraqis to continue a "holy war" against U.S. forces.

"The occupier has occupied in order to weaken Iraq and destroy its will, and therefore, anything issued by occupation is to weaken Iraq. The only solution … is a jihad (holy war) to resist the occupation," said the voice.

The audio recording said President Bush and British Prime Minister Tony Blair lied to the world to justify their war on Iraq.

"The lies were known to the U.S. president and the British prime minister when they decided to launch a war and aggression," the message said.

Another message purportedly from Saddam aired July 4. CIA officials also said it was probably authentic but their analysis was hampered by the audio's poor quality.