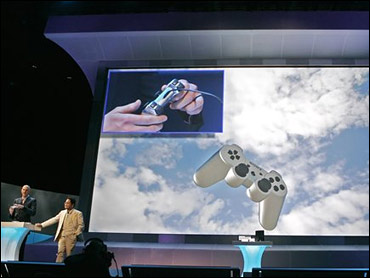 Sony Corp. executives showcased the benefits of the company's upcoming PlayStation 3 console saying its technological features will give it an edge over rival products from Microsoft Corp. and Nintendo Co.

Sony executives again touted what they claim are competitive advantages, such as the PS3's speedy "Cell" processor, the console's Blu-ray disk format for high-definition video and an online network that will include video chat and micropayments.

Compared to the previous models, says CBS News Technology Analyst Larry Magid, the new game consoles being unveiled this week are dramatically better, as manufacturers show off some real advances in technology. "The graphics are much more vivid and lifelike and the action is noticeably more realistic," says Magid, adding that Sony has a lot riding on PlayStation 3. "Apple has taken away much of the market for Sony's WalkMan products and even though Sony's flat panel TV sales are going very well, the company does have some serious competition when it comes to high-end TVs."

The PS3, which was originally set to debut this spring, is now expected in the fall. Key information such as the exact launch date, price and games lineup have not been announced.

Executives on Monday did not release pricing information and instead spent most of a more than two-hour meeting showing off new PS3 games, including a demonstration high-definition version of the racing game "Grand Turismo" and the sword fighting action game "Heavenly Sword."

In a recent report, American Technology Research predicted the PS3 will retail for $499, about $100 more than the current top-of-the-line Xbox 360.

Microsoft's Xbox 360 got an early start on the next-generation console wars and has sold 3.2 million units worldwide since it was released in November. Until recently, Microsoft had been unable to meet demand.

Pricing and other details also are sketchy on Nintendo's Wii (pronounced "We"), which uses a unique TV-style remote controller that can be waved around to manipulate action on the screen.

This year's E3 conference comes with the industry in financial turmoil as it transitions from older systems to the new consoles. Much of it has been blamed on consumers' desire to hold out for the PS3 and Wii.

The period has been especially brutal for key game makers like Electronic Arts Inc., which recently lost $16 million in its fiscal fourth quarter. EA predicts video game sales industrywide would be flat to down 5 percent in 2006.

During last year's E3, Sony executives proudly showed pretty video clips of supposed PS3 games but very little in the way of actual game play. The same was true for the Nintendo Wii and the Xbox 360.

Expect a more hands-on approach this year, with attendees finally getting a chance to play games on the new systems, said Doug Lowenstein, president of the Entertainment Software Association, which organizes E3.

"You'll be able to kick the tires and see what's under the hood," he said. "It's no longer about specs. This is about performance, this is about 'What do you have to show me?'"