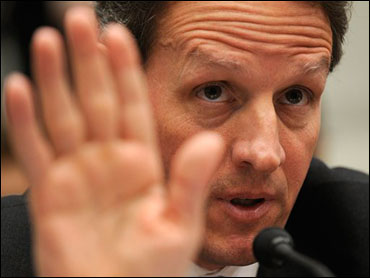 It's reasonable to be outraged at the seven-figure bonuses that some of AIG's top earners received, courtesy of taxpayers. But save some ire for the government officials who let this situation develop in the first place.

We're starting to see more evidence that last September's government bailout of AIG was, contrary to what our esteemed leaders in Washington have been telling us, not exactly necessary.

Lucian Bebchuk, a Harvard professor of law, economics, and finance, wrote last week that claims of catastrophe if AIG filed for bankruptcy protection were "exaggerated." Larry Ribstein, who teaches business law at the University of Illinois, has gone further and argued that not only is an AIG bankruptcy possible, it's necessary to preserve what remains of the U.S. financial system.

Another bit of data that recently became public is a partial list of AIG's counterparties - including Goldman Sachs, Bank of America, and European financial institutions. Why can't those companies take "haircuts" and accept some losses? Instead, U.S. taxpayers are being forced to bankroll this effort to the tune of over $170 billion, so far, even as their own 401(k)s shrink and home values slide.

Unfortunately, the collective temperament of most Washington politicians - call them the Bailout Party, a term that includes Democrats and Republicans - includes a fondness for crony capitalism that dates back to the 1998 bailout of the hedge fund called Long-Term Capital Management. Not only is AIG likely to receive more handouts from the U.S. Treasury, but so are other firms that have yet to fail.

The best answer is to halt the rush toward bailouts. The second-best is to take the decision out of the hands of one or two individuals (Henry Paulson, Timothy Geithner, Ben Bernanke) and turn it over to the democratic process in the form of the U.S. Congress, which the almost-forgotten Constitution makes responsible for appropriating funds.

If that isn't politically feasible, there's one more option: prevent companies in the financial sector from becoming too big to fail. Keep them small enough to fail.

This is, admittedly, an unsavory choice. Although antitrust law might be one way to accomplish that objective, it brings with it a legion of other problems. Dominick Armentano, a research fellow at the Independent Institute and a professor emeritus at the University of Hartford, argues: "The weight of the general evidence is that the firms indicted under the antitrust laws were not abusing consumers, and that the laws have tended, instead, to protect competitors and reduce efficiency throughout the market."

On the other hand, modern antitrust law grew out of a belief that a check on "irresponsible" corporations was necessary. Worries about monopolistic behavior by railroads and Standard Oil Company are what, in large part, led to the creation of the Interstate Commerce Commission and the enactment of the Sherman Act. (If the word "irresponsible" doesn't describe AIG, I'm not sure what does.)

Another method would be to limit the dollar value of bets that a company like AIG can enter into. AIG was brought down by its exposure to credit default swaps - the total global market as of last fall was around $62 trillion - that allowed it to bet with other firms about whether a third party would default on debt.

If AIG's exposure to these bets was curbed, then it would have been likely to remain small enough to let fail. Bloomberg News estimated last fall that AIG provided $441 billion in backing for Wall Street trades involving credit default swaps; some fraction of that could be an upper bound.

All of these suggestions suffer from problems, including limiting what responsible firms can do because others will be less responsible, and a future administration could always declare that a set of smaller firms have collectively made bad bets and must be propped up for one reason or another.

But what they would do is reduce the ability of private firms to engage in what has come to resemble legalized extortion - the practice of telling regulators that if they don't cough up cash, catastrophe will ensue. The Washington Post has uncovered a secret AIG presentation to government officials that warned of a "chain reaction of enormous proportion" involving "a cascading set of further failures."

The consequences of these repeated bailouts are immense and historic. As of last month, the U.S. government has risked $9.7 trillion on bailouts, not counting the Treasury Department's new toxic asset-buying plan. To put that in perspective, the IRS collects only $1.36 trillion a year in individual income tax revenue.

Given a choice between a free market and where firms are constrained in size, I'll take the free market. But thanks to the Bailout Party, that's no longer an option, and may not be again for quite a while. Ed. Note: Declan McCullagh will be on vacation for the next two weeks.

I encourage you to bookmark the home page for my Other People's Money column. An RSS feed is available too. If you have questions, feedback, or other suggestions, please feel free to e-mail me at declan.mccullagh@cnet.com. Declan McCullagh is the chief political correspondent for CNET and an EconWatch contributor. Previously, he was Wired's Washington bureau chief and a reporter for Time.com and Time magazine in Washington, D.C. He has taught journalism, public policy, and First Amendment law. He is an occasional programmer, avid analog and digital photographer, and lives with his wife in the San Francisco Bay area.
By Declan McCullagh