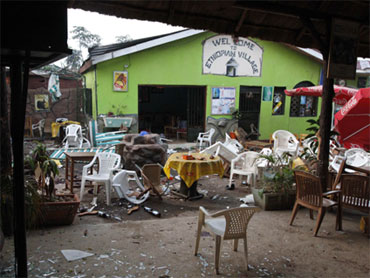 The leader of the al Qaeda-linked Somali militant group that claimed responsibility for twin bombings in Uganda during the World Cup final threatened further attacks in a new audio message released Thursday.

The leader of al-Shabab — Sheik Muktar Abu Zubayr — also thanked the militants who carried out Sunday's twin bombings in Uganda that killed 76 people. It was the first time al-Shabab had struck outside Somalia's borders.

In the audio message played on Mogadishu radio stations, Abu Zubayr told Uganda's president that more attacks would be carried out.

"I say to the Ugandan president what has happened in Kampala was only the beginning. We will keep revenging what your soldiers remorselessly did to our people. Your tanks destroyed the remains of our buildings in Mogadishu and we will also revenge that," Abu Zubayr said.

The bombings on Sunday ripped through a restaurant and rugby club as crowds watched the World Cup final between Spain and the Netherlands on television.

Who Are the al-Shabab Militants?
Uganda Attacks Raise Questions of Group's Reach

Al-Shabab said the bombings were revenge for Uganda's deployment of peacekeepers in Mogadishu with the African Union force, known as AMISOM.

Al-Shabab battles African Union and Somali forces in the streets of Mogadishu daily, in an effort to topple Somalia's weak, U.N.-backed administration. Those attacks often miss their military targets and the crossfire kills scores of civilians,

"What is called AMISOM has committed a nasty massacre in Mogadishu, worse than the ones committed before by the Ethiopians and Americans: constant shelling at poor civilian populations, tanks leveling what remained of Mogadishu buildings and machine-guns shot at public vehicles. All those were the habits of AMISOM," Abu Zabayr said.

Abu Zubayr also thanked the militant team that carried out the attacks. He said they were members of the Saleh Ali Saleh Nabhan contingent, named after the militant killed in a U.S. commando raid in rural southern Somalia last September. Nabhan was wanted for the 2002 car bombing of a beach resort in Kenya and an attempt to shoot down an Israeli airliner.

Meanwhile, Ugandan President Yoweri Museveni said at a news conference that his country is committed to sending 2,000 more troops to Somalia if the East African regional bloc known as IGAD agrees. He also called for African Union members to send up to 20,000 troops to Somalia "as soon as possible."

There are currently more than 5,000 AU troops in Mogadishu from Uganda and Burundi. After the twin bombings in Kampala, al-Shabab also threatened to attack Burundi.

Uganda hosts an African Union summit later this month where Somalia force levels will be discussed.

Museveni told Ugandans not to blame the Somali community in Kampala for Sunday's attacks amid reports of rising tensions between Ugandans and Somalis.

"Not all the Somali people are dangerous," the Ugandan president said. "There could be some elements who are dangerous but the majority are good."

Museveni vowed to find the terrorists who carried out the attacks and "eliminate them."

Over the last two years, foreign fighters numbering in the low hundreds with experience in Afghanistan, Pakistan and Iraq have joined al-Shabab, according to international officials, raising the group's level of militant expertise. Somali-Americans have been recruited and taken part in suicide bombings.

The U.S. branded al-Shabab a terrorist organization in 2008, more than a year after Ethiopia sent troops into Somalia and touched off an Islamist and nationalist insurgency that still rages.